For the last few years I’ve done Movember. Not only did I help raise several hundred thousand rands for CANSA but I also quickly realised that fast facial hair growth is one of my super powers. Despite this evolutionary advantage over other humans, I’ve spent the rest of my time on this planet clean shaven. At the end of last year I finally decided it was time to embrace this talent and unleash the full potential of my unshaven awesomeness on the world – so I decided to Decem-beard.

Eight months on and the world is indeed a better place. Based on my experience, here are my top 10 reasons to grow a beard…

In the first half of this year I ran 14 marathons. Thirteen of these were under the harsh South African summer sun.

These days I don’t run that fast so I spent quite a while under the penetrating rays of our sun. Women and children would need to lather on liberal dollops of sun screen to avoid a nasty bout of skin cancer. Luckily I am a man and can grow an impressive beard that is impenetrable to the sun’s rays.

2. Protection From The Harsh Colorado Winter

I visited Boulder, Colorado on a business trip slap bang in the middle of the skiing season. Crossing hemispheres from the South African summer I was expecting to suffer. I rationalised that my beard would protect me from the elements. I was not expecting to be able to run outdoors in Colorado but was surprised to arrive to a nice mild winters day – and managed to explore the Boulder countryside via a 20km run around the town and up a mountain trail until the ice in the path forced a retreat. The weather did turn later in the week though.

3. Prevent Getting ID’ed for beer

I had not been to America for a while but remembered that there is only one thing that concerns them more than Fundamentalist Terrorists – underage drinking. You can drive a car at 16 and travel the world killing people for your country before you turn 18 but heaven forbid you consume an alcoholic beverage before your 21st birthday in the USA. Having reached the tender age of 40 – and sporting a beard that no teenager could possibly grow (complete with the odd grey fleck here and there) – would surely mean I wouldn’t have to waste valuable beer drinking time digging around for my passport? Alas, I drank plenty of beer during my 10-day stay in the USA – and I showed plenty of people my passport mugshot to do so.

Result: Still to be Determined

At the start of the year I moved into a new role managing the transition of my organisation from Waterfall to Agile software development. I figure that in order to drive true change you need to be a revolutionary – all the best revolutionaries have beards. I am trying to join their ranks.

As a middle-aged man, some hair loss is expected. I was holding up pretty well until the arrival of my second child. If the Antarctic icebergs were receding as fast as my hairline, even Donald Trump would stop being a climate change denialist. The cheapest and most effective way to offset hair loss is grow a beard. No one comments on my hair anymore because they are too busy getting distracted by complimenting my beard.

6. Two Years Ago My Wife Cut Her Hair and I Finally Figured Out How To Get Her Back

To be honest my wife did look quite good with short hair but I still like her better with long hair. I like to look at my wife a lot so I reckon I should have some say in her appearance. Despite my protests she went ahead and cut her hair. At the time, I was not able to provide a strong enough argument to prevent the chop. But now I can use the “then I’ll grow a beard” leverage over her. In writing this I realise that there is a serious flaw to my logic… She will threaten to cut her hair again if I don’t shave my beard. 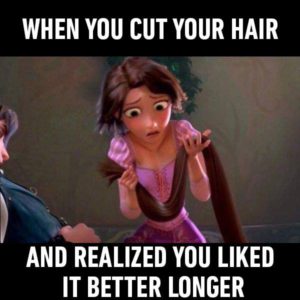 Shaving each morning is boring and time-consuming. Each shave takes at least 5 minutes (slightly longer when there is a full moon). Having a beard for saves you over 30 hours a year. Who knew that a beard is an important productivity improvement tool! 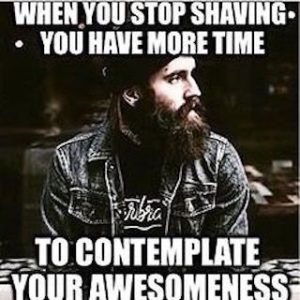 8. Pretend To Be A Rugged Ourdoorsman

Although I am able to change a car tyre and can drill a hole in the wall under duress, that is about as far as my handyman skills go. A beard makes you looks like a rugged outdoorsman that can MacGuyver your way out of any situation. There was potential for my massive fraud to be uncovered when I went to the “Dads and Daughters” Camp Out at my eldest’s school. I was worried that the other dads would be asking me for advice in tent erection and camping techniques but my wife pointed out that my beard was now so impressive that they would assume I lived in a cave rather than a tent. 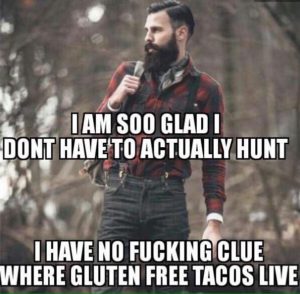 9. Game Of Thrones Is Better With A Beard

There are plenty of opinions rationalising the success of the most pirated TV show of all time. These include a gripping and intricate storyline, copious amounts of violence, the unpredictable deaths of major characters and frequent sightings of floppy wieners. However, I believe that the real reason for Game of Thrones’ success is the most impressive collection of beards ever assembled in television history. My two favourite characters are Tyrion Lannister and the Hound – I’d like to think that if they had a child he’d look like me.

10. As A Catalyst To Publish My First Blog Post

My wife has been prolifically blogging for a while (see http://findingyourlifepassion.co.za/). This year instead of a birthday present I asked her to create me a blog site so I could write articles, marathon race reports and share funny anecdotes. She delivered the site on my birthday which was almost 3 months ago and I have been spending all this time learning the ropes and threatening to unleash my insights onto the internet. Finally, I have delivered…