Running with a buddy is fun and saves costs when travelling. I’ve been running a marathon a weekend and my travelling running buddy, Julian Karp, has been doing two a weekend – but it was only on week four of the South African marathon calendar that our plans aligned for the Potties Marathon. 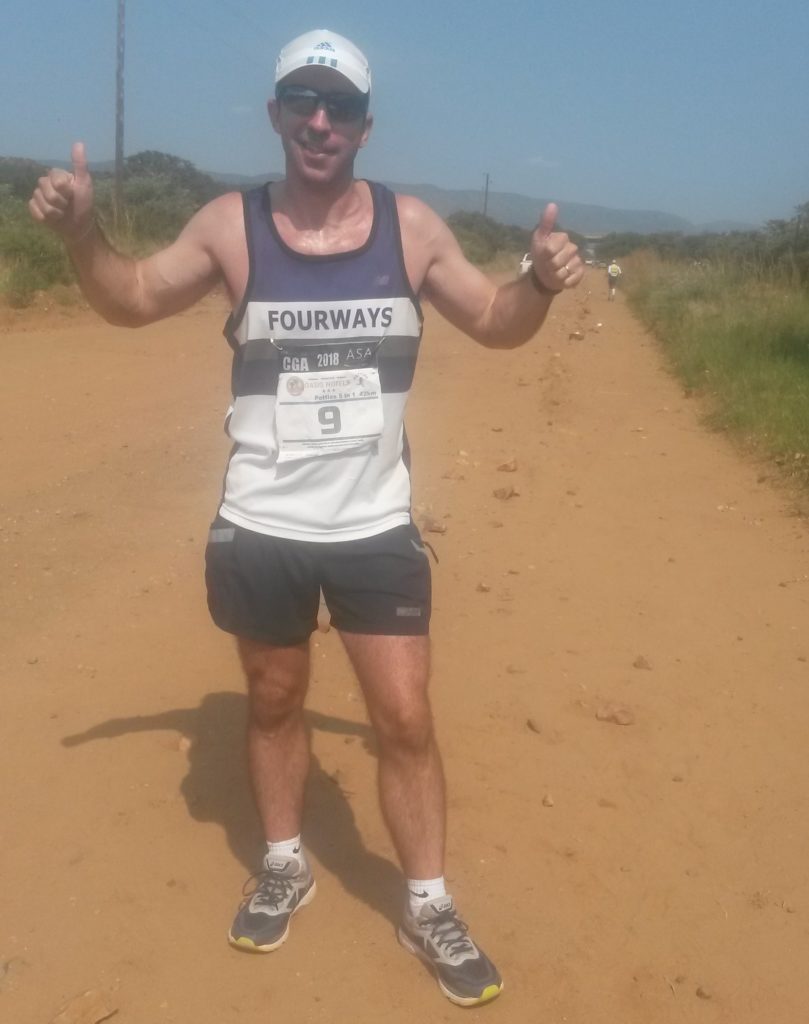 We caught up on marathon adventures on the drive to Mokopane (formerly Potgietersrus). Although the town name was officially changed in 2003, there are no plans to change the race name to Mokkies in the near future. 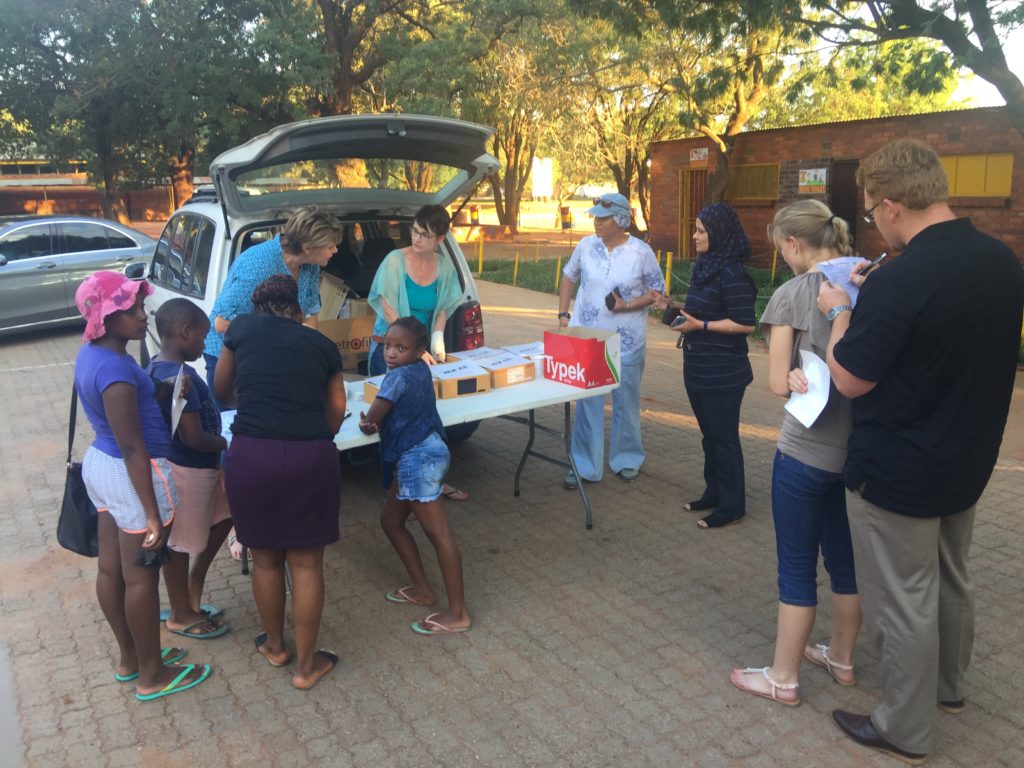 After an easy 3-hour drive due north on the N1, we pulled into Mokopane Primary School for registration and I immediately noticed that some idiot had parked in the middle of the car park. It turned out that this was actually the race registration desk!

There was no online entry and our late afternoon arrival was still early enough for Julian and I to be awarded Scrum- and Flyhalf race numbers (#9 and #10).

We met up with another JK – the former international rugby referee Jonathan Kaplan – who has also completed over 100 marathons and, like me, is on a mission to complete 100 unique marathons (he’s just over half way there on that count). 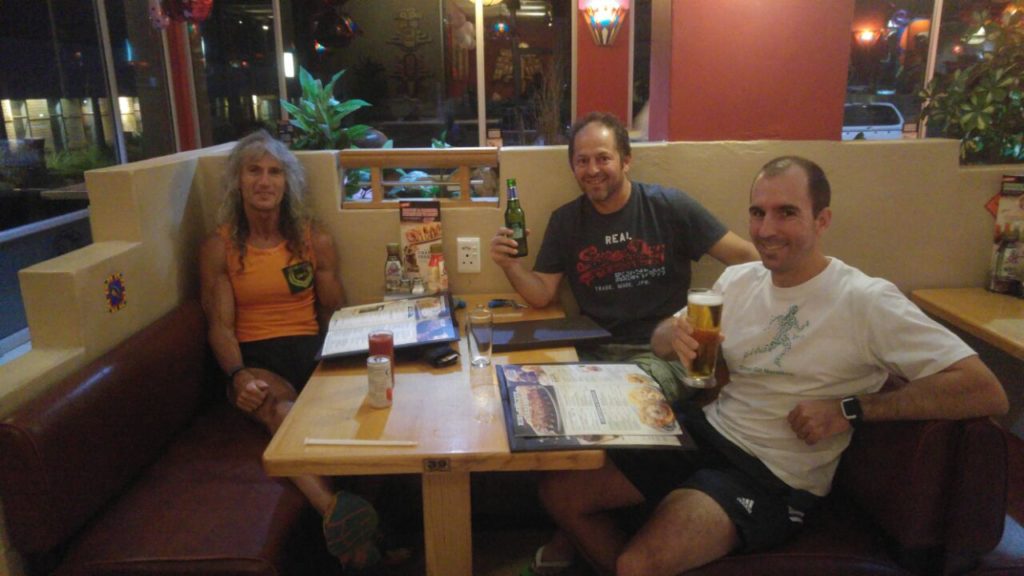 Over supper at the local Spur, we talked about Julian’s Top 10 marathons  – this was a really long conversation as there are at least 50 races in Julian’s Top 10 list. We subsequently realised that there were 992 marathons run around the table (but “only” 70 rugby internationals officiated). Refereeing is much easier than marathon running – games only last 80 minutes (and when you need a breather you just blow for a penalty)! The vast majority of the 992 marathons have been run on Julian’s legs (over 700) – he is hurtling towards his goal of an incredible 1000 marathons at a rate of 50+ per year.

If you ever wondered whether referees secretly fantasise about being players, you should have seen the look of disappointment on RefJK’s face when we told him that we’d scored the halfback race numbers – he had not yet registered and seriously considered waking up an hour early in the morning just in case there was still a “bench number” available at registration. In retrospect, we missed a trick and should have arranged #23 for him! 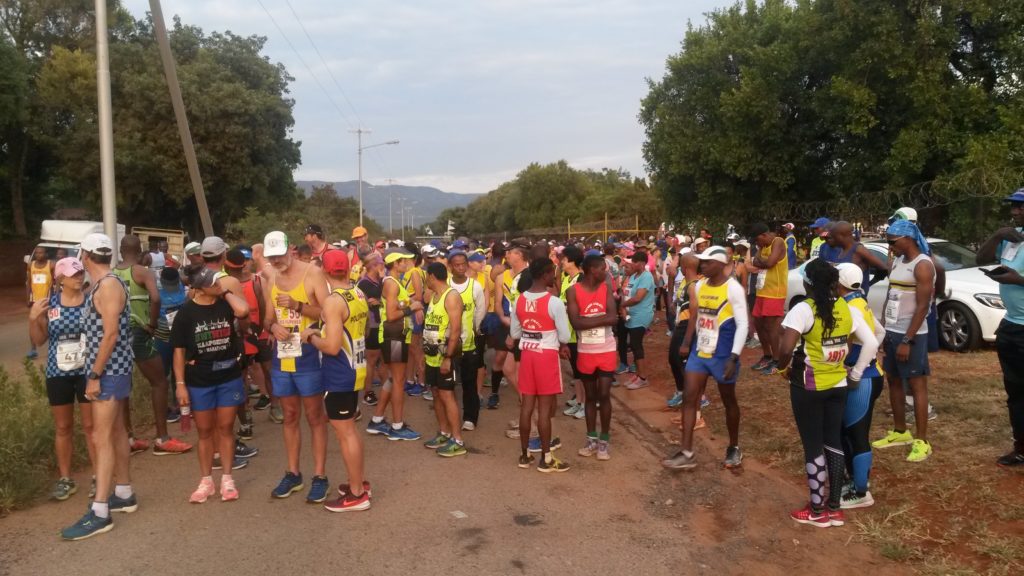 The sun was already shining brightly as about 450 runners lined up at the start on a warm Limpopo morning. Most were there for the marathon (145) – the rest of the field was split evenly across the 32km, 21km and 10km races. The race kicked off promptly at 6am with a single gunshot and no other fanfare. There was so little preamble (and the customary country prayer was also skipped) that I have subsequently wondered whether we all false-started mistaking gunfire from one of the nearby shooting ranges for the starter’s pistol.

There were several pacing busses to help runners get their desired Comrades and Two Oceans seeding. The most festive on the day was the 4:20 bus led by Rocky (the King of the Mountain) from Polokwane. The video was at about the 10km mark and the bus kept up the singing and chanting over the whole marathon.

The race and route had plenty of interesting signs and attractions – here are some of them:

I am not a great fan of double-lap marathons and tend to avoid them if at all possible. However, I would make an exception to come back and run Potties again. The race is really easy to get to and into (even if the hotels aren’t). If you’re going to run one double-lapper, this is the one I would recommend.

On the drive home, Julian tried to convince me to join him for Pick ‘n Pay marathon the next day – I politely declined telling him that the only Pick ‘n Pay endurance event I would be doing tomorrow was the weekly grocery shop with my kids!