I am trying to run a different marathon every weekend to reach my goal of 100 unique marathons before Comrades (it is not wise to plan anything post Comrades). As a marathon slut (I like to run around and will get my legs onto whatever I can), I’ve found some great marathons all around South Africa (and the world) on this quest. Occasionally I get the opportunity to tick off one of my “bucket list” races – and on the second weekend in February it was time for the Assegaai Marathon to come out of the bucket and into my legs. 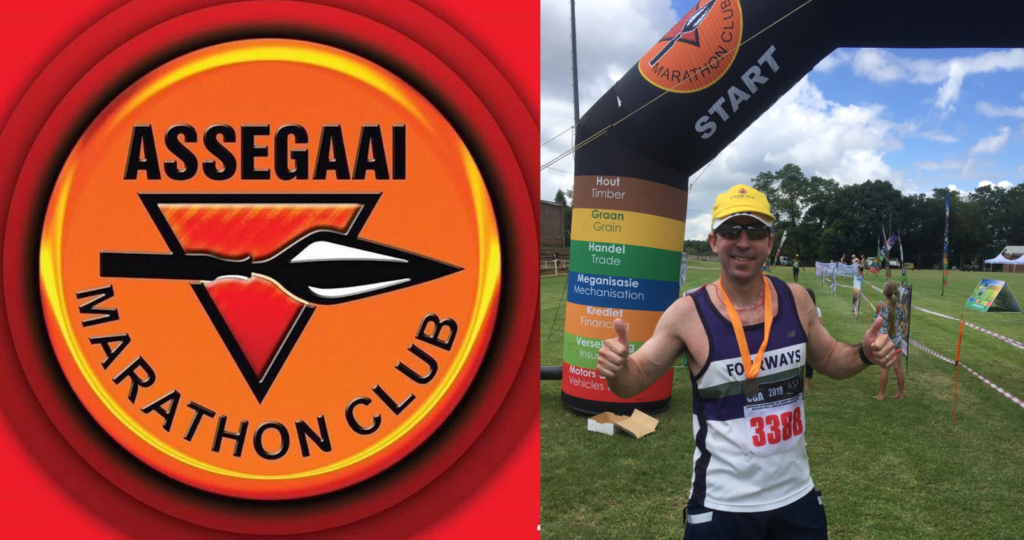 My interest in the event goes way back to one my early Two Oceans, I remember being intrigued by the striking orange and red running vest that featured an assegai spear head. Most running clubs have boring names based on where they’re located (and if they’re located in Benoni or Boksburg they’re even boringer). I was genuinely intrigued by Assegaai Marathon Club and struck up a conversation with one of their runners. I remember little of the conversation other than that they were based in Piet Retief (but I had no idea where that was).

Piet Retief/Mkhondo is a small town in eastern Mpumalanga that is a stone’s throw from the Swaziland Border. Piet Retief was named after the Voortrekker leader of the same name who was killed by Dingane. Dingane became the leader of the Zulus after murdering his half-brother, Shaka. Shaka is the most famous Zulu King and is the only person mentioned here who has an airport named after him. Shaka’s reign led to the rise of the Zulu nation. He is credited with several tactical and military innovations – one of which was the introduction of the short stabbing “Assegai” spear. The spear was also known as the iklwa because that is the sound it makes when withdrawn from a victim’s body.

However, Assegaai lurked in my subconscious over the years and when I heard that there was an Assegaai Marathon I knew I had to run it. It’s only over the last 3 years that I’ve made an active effort to get around the country to run different marathons. Every year I had Assegaai on my list but for various reasons was not able to make the trip (last year I had just returned from an overseas work trip and couldn’t get my permission slip signed).

I know that you shouldn’t judge a book by its cover but I was keen to see whether you can judge a marathon by their shirt! 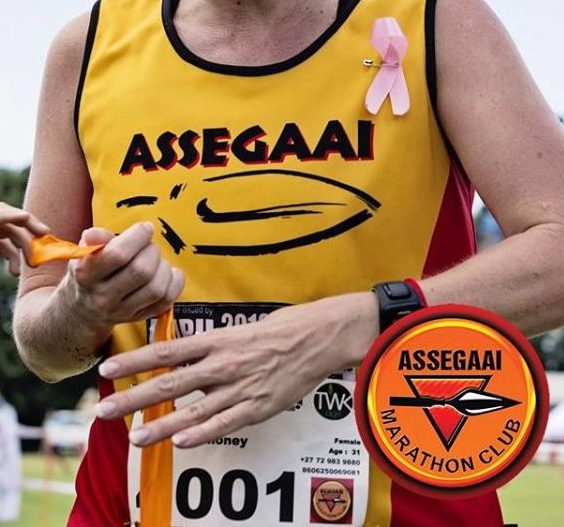 The drive from Johannesburg takes between 3h15 and 4h depending on your truck luck. The road quality is good the whole way (no potholes) but there are a lot of slow trucks and several long single lane sections which makes passing difficult.

There is no shortage of places to stay in town as there are a lot of contractors working the area (Mkhondo Municipality houses TWK Agri’s headquarters, a number of large paper mills and there are several other agricultural companies based here). The town also benefits from tourists in transit to the South African and Mozambique north coast as well as the Swaziland game reserves.

You can find a decent room in town for R400 (£25/$35) and I ended up staying at the Green Door. If you’ve heard the song (or watched the movie) and wondered, “What’s behind the green door?” – in Piet Retief it’s the local Postnet (which the guesthouse doubles-up as).

I hit registration just before sun down and there was a festive atmosphere at the local rugby club. After enduring a passive smoke as I walked through the bar to the outside registration desks, I enjoyed a more active smoke from the aroma of freshly cooked boerewors that was wafting over from the braai area. I enjoyed sampling some varkvleiswors that was being handed out by one of the (what definitely looked like former) rugby players before collecting my number.

I’d made sure that I got my entry in early as the first 75 marathon entrants get a high quality long sleeve running shirt. When you do a race that’s been on your bucket list for some time you want to make sure that you get all the running bling that goes with it! Along with the shirt, the goodie bag consists of some water (bottled in Alberton of all places), an energy bar and the December edition of the agricultural magazine Radius (the most interesting article was “When can I fire a warning shot?”  – basically a guide on how to avoid going to jail when using a firearm in self-defence). 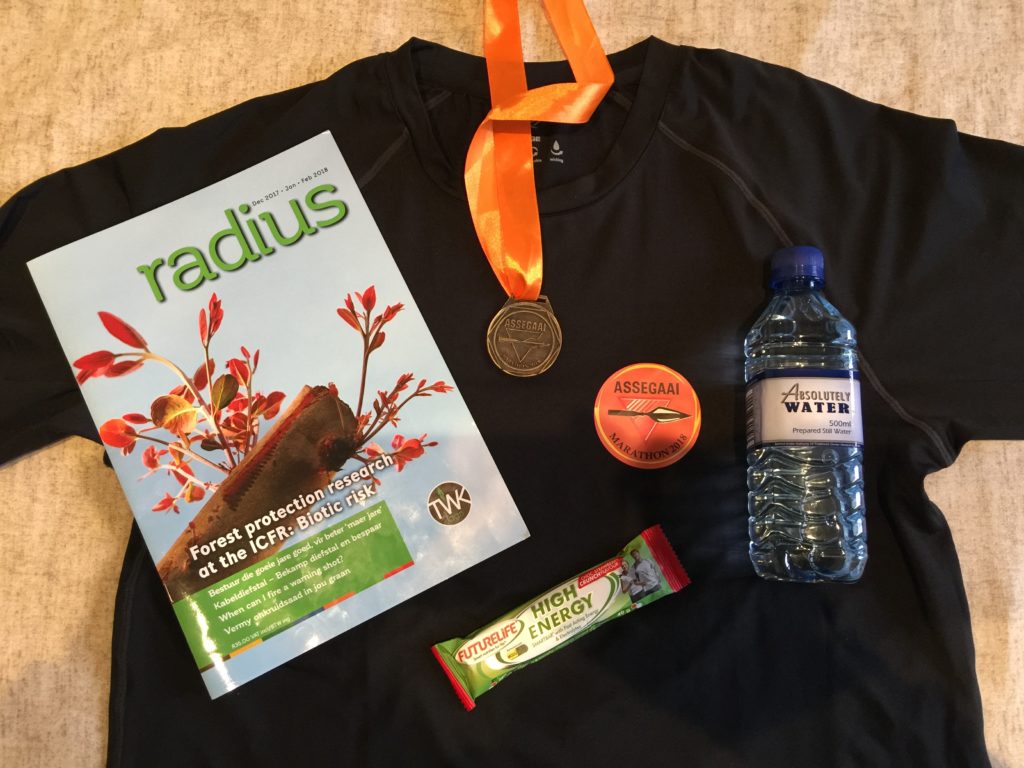 Having collected my race pack I noticed that there was a special table setup to encourage runners to take a pink ribbon to run with. One of the club’s members had recently been diagnosed with pancreatic cancer and was struggling in hospital. Apparently, he’s recently married and not on a medical aid (which is not a great position to be in). If you feel the urge and would like to make a donation you can get the details here. 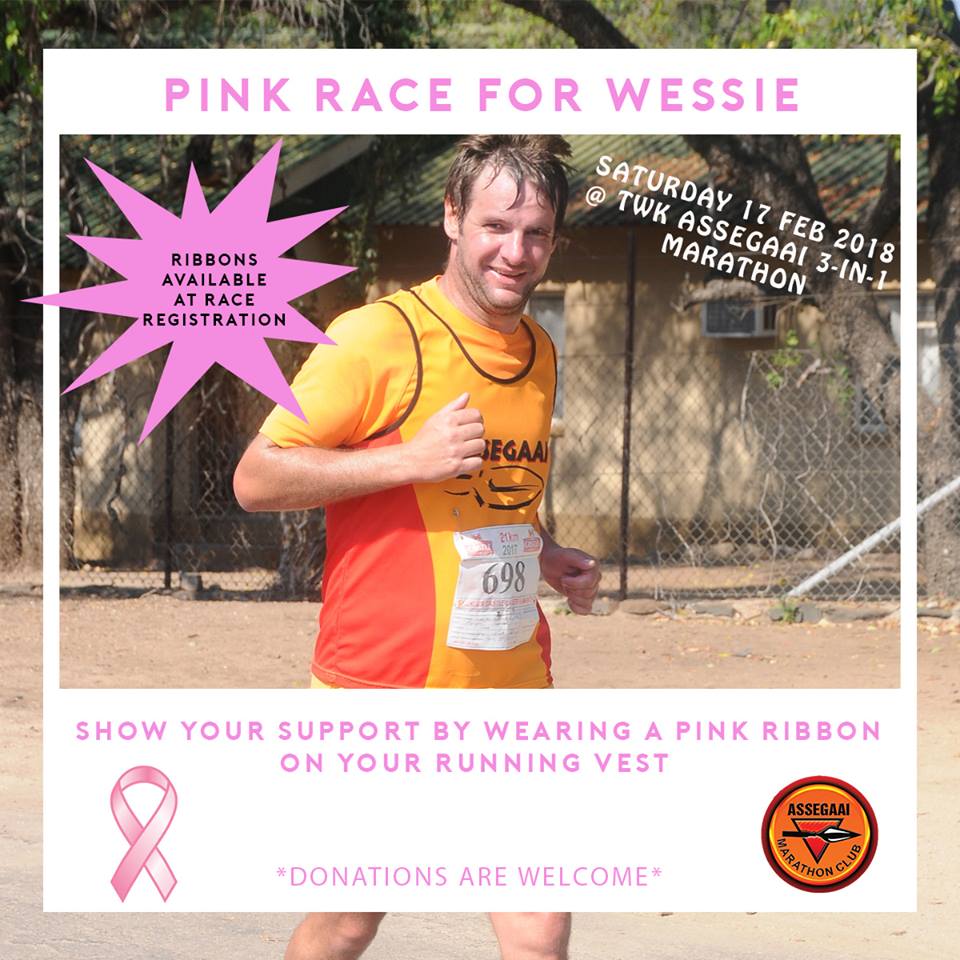 There are many benefits running small town races – one of these is not hassling with traffic and parking. Arriving with 5 minutes to spare and still managing to park nice and close to the start, I got out of my car and immediately heard the urgent pleas of running legend turned race announcer, Neels Vermeulen, for runners to, “Please share your safety pins!” as the race had run out after an unexpected influx of entrants.

The record field (just over 500 runners – split evenly across the marathon, half and 10km) did result in the start being delayed by 25 minutes as the organisers processed the final runners. We got lucky with the weather as we had cloud cover for most of the race but if it was a normal Mkhondo scorcher I expect the marathon runners would have been cursing the late start.

The race has grown steadily over the last three years – and the growth has coincided with TWK Agri stepping in as race sponsors. They give the race a really professional look and feel – including great medals, race shirts and “personalised” race numbers. The start/finish line area is particularly impressive (more professional than most “big” races) with archways, flags, gazebos and banners welcoming all the runners.

TWK Agri goes all the way to 1940 when 52 members of the Piet Retief Wattle Growers and Timber Association decided to form a cooperative – which they called the Transvaal Wattle Korporasie. Over the years they’ve diversified into other timber lines as well as grain, trade, mechanisation, financing, insurance, vehicles and tyre products and services.

However, my favourite is a very interesting insurance product where you can buy a share of a rhino to help private farmers with rhino conservation.

The delayed start meant that the runners were raring to go and eagerly anticipated the firing of a (small) canon which heralds the start. The canon was lit and everyone braced themselves for a big bang. We’d just had a minute’s silence for a couple of runners who’d recently passed away and the silence continued as the canon fuse fizzled out. Luckily they had a backup hooter and with a loud toot we headed off. 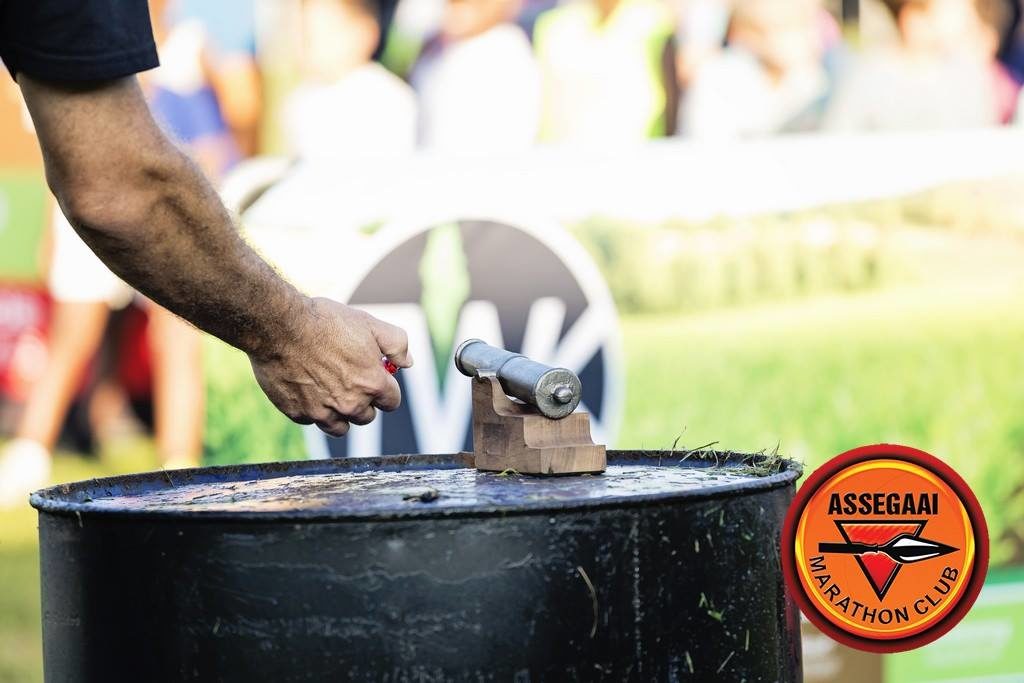 After leaving the rugby club, we headed east on the road to Mahamba (a Swazi town just over the border). Over the first few kilometres I got chatting to another Joburg runner, Russell “Mr. Chip n Dip” from Old Eds (Russell is one of their younger members at 55). It’s always good to trade a few marathon stories with a fellow enthusiast. I passed a second Old Eds runner about 10km from the finish (impressively still running tough marathons at 65) – so this was probably the biggest turnout Old Eds has had at any marathon for several years.

The route is really simple – you run all the way to the Assegaai River and then you turn around and run back again. The first 8km provides a gentle climb and then you have a long gentle decline before a final plummet to the river. This makes the second half of the race really tough – I would describe it as a “Double D” route (when you look at the route profile it appears that you’ve just run over some particularly impressive cleavage).

In previous years, you first did a loop around the town which meant you turned around before getting to the Assegaai River. I like the change – the river is stunning and it’s fitting that one gets a viewing since it provides a central theme to the town and club – missing it would have been a real pity. The downside (quite literally) is that you have a really tough climb to start the second half. I guess you could say that as one turns around to head back to Piet Retief, the Assegaai Marathon stabs you in the back!

There is some great scenery to take in along the route. I particularly enjoyed the avenues of wattle and blue gum plantations which almost make it feel like you are running along a giant’s driveway!

A special feature of small town races is normally the support tables and Assegaai was no different. All the tables are run by local businesses who put in a lot of effort to make their tables stand out. They are incentivised via a prestigious trophy for the best water table (runners are asked at the finish line which one they like the most).

This year the deserving winner was the Charka table who smoked out the competition. They had a phenomenal table, superbly decorated, and offering Coke, Crème Soda, Energade, chololates, Super Cs and freshly cut watermelon. It was definitely one of the best support tables I’ve ever had the pleasure of running through over 177 marathons. They told me I could take a bag of charcoal home – but I thought carrying a 5kg bag over the last 11km was not the best idea! Instead I settled for a Charka cap and double-hatted to the finish!

Charka is like the Viagra of braaiing – if you want the best for your meat, their charcoal ensures that your braai lasts longer (which is important if you’ve got a particularly large piece of boerewors and you want to make sure it’s well done).

If you run this race and like free stuff, bring a shopping basket as the Vodacom table has sunglasses, headphones, water bottles and caps available for the runners. Although I had declined the 5kg bag of charcoal at the Charka table, I did accept a pair of sunglasses from the Vodacom ladies who suggested that their glasses looked better than mine!

All in all I’d done well, arriving back at the finish with twice as many caps and sunglasses than what I started with! My truck luck was also good on the drive home and I headed straight into the dadding part of the weekend with a kiddies party (they did have beer there for the dads – and this was one thirsty dad after a marathon and a 4-hour drive!).

For me, the Assegaai Marathon lived up to expectations – they have a great running vest and an even better marathon. The marathon is off my bucket list but has hopefully been added to yours after reading this report!

Note: The Assegaai Marathon has a really good Facebook Page with lots of info and photos from the day. I would recommended giving it a “Like” so that you get notified when 2018 entries open – check it out here.

4 Replies to “Assegaai Marathon (Can You Judge A Marathon By The Shirt?)”