The runners in Mbombela like to go down. They have one marathon (Kaapsehoop) and one ultra – and both are certified quadkillers – plummeting you from the highest points in the Lowveld down to Mbombela (in the lowerveld).

How low can you go? You have the choice of doing the Uniwisp Fast 10, 21.1, 42.2 or 50km. Having just done the 50km option (what else!), I can certify that this is the fastest ultra in country and makes Loskop look like Longtom. 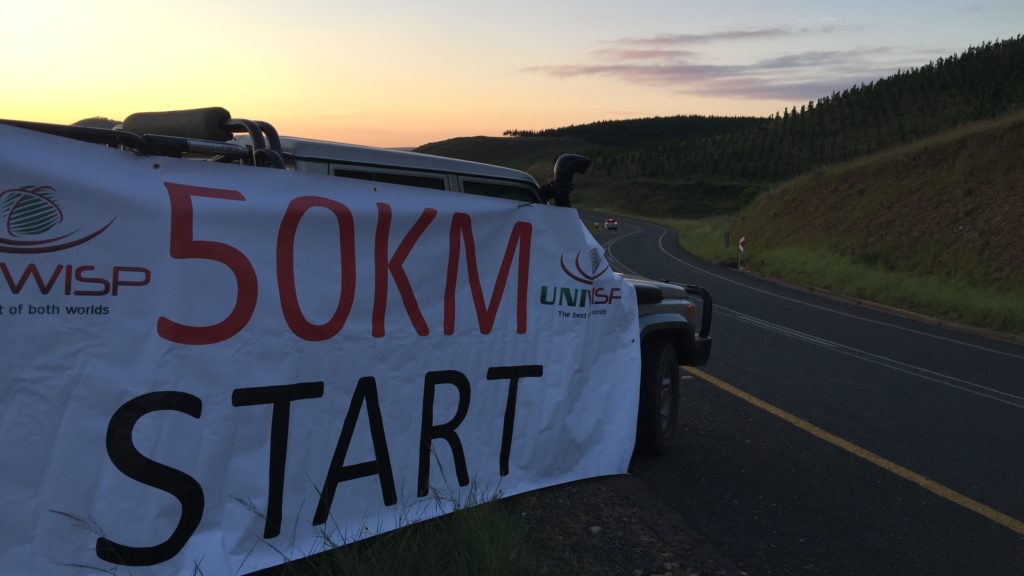 Being such a fast course, the race is used by many runners as their Comrades qualifier (or to try and get a better Comrades seeding). To qualify for Uniwisp, you need to prove your fitness by climbing up five flights of stairs to the executive suites in Mbombela Stadium (one of the 2010 Football World Cup stadiums and current home of the Mpumalanga Pumas rugby side) to get your race number at registration.

Although I was huffing and puffing by the time I reached the top, the climb did stretch out my legs after the 4-hour drive from Johannesburg – and we also got to appreciate the view from the top (there was a schoolboy rugby match on while we were there).

Logistics are often a challenge with point to point races but this is taken care of by the organisers who put on busses for the athletes. Having the furthest to travel, the 50km bus was the first to depart at 4:30am (for a 6am start). The bus managed to chug up the hills on the R37 towards Sabie. We were eventually dropped off at a stunning location in the middle of nowhere with enough time to make a trip to one of the porterloos (the only sign of civilisation in the area) and enjoy the sunrise.

The morning air was surprisingly cool but the temperature rises quickly as the sun comes out. The organisers took this into consideration and made sure we warmed up properly with an initial 1km climb before we started our rapid descent.

The Lowveld can get extremely hot but I had taken precautions –  looking like I might be from the cast of Inxeba after a very liberal application of sunscreen. However, after about 8km I realised that I had forgotten the lubricant. By this stage I had worked up a good sweat under the hot African sun – although my legs were still fresh I realised that I was starting to wear out where the sun don’t shine (a bit like rusty steel wool scouring exquisite porcelain). The situation was urgent – I knew that I had to make a plan fast or I would be spending the rest of the weekend walking around like John Wayne!

As luck would have it, the Van Heerden Pharmacy table was around the next corner and had a full medical kit available. As I approached, a kind lady noted the desperate look on my face and politely asked if “I needed any help.” Whilst simultaneously grabbing hold of a giant tub of Vaseline, I politely declined her kind offer and said I would self-medicate (much to her relief as she realised the nature of my distress).

Feeling a lot more comfortable, I trotted off and enjoyed the scenery – the route is truly spectacular with great vistas and plenty of interesting flowers, foliage and shrubbery.

Mbombela is the largest city and capital of South Africa’s Mpumalanga province. The first time I visited (many years ago when it was still called Nelspruit), I remember being astounded at the natural beauty in the vicinity. There is a massive amount to do in the area – the big drawcard is the Kruger National Wildlife Park which is short drive away. However, there are also plenty of other attractions and natural beauty in the area like the Sudwala Caves, Bourke’s Luck Potholes, God’s Window and Three Rondavels. If you haven’t already visited, it’s definitely worth planning an extended holiday in this region.

The Kruger National Park and surrounding game farms have been instrumental in ensuring the survival of many of Africa’s big game species. Unfortunately, one thing that had gone extinct in the Lowveld was ultra marathons – two great races, Long Tom and Jock of the Bushveld, have both disappeared (as has the Elands Valley Marathon). We have Uniwisp to thank for the reintroduction of ultras to the region – this race was also cancelled for several years until Uniwisp (who also sponsor Kaapsehoop Marathon) stepped in three years ago. Since then the race has gone from strength to strength with the over 1200 runners and the introduction of the ultra this year.

Uniwisp is an all-encompassing technology solutions provider. They do wireless internet, fibre to the home, ADSL, LTE, infrastructure, CCTV, security, satellite, VOIP and ICT consultancy services. One of their founders, Marius Botha, is a Comrades Green Number holder so you know that they will be there for the long run! According to race director Paul Odendaal, “as running sponsors they’re tops and as people they’re tops”.

With about 8km to go the Mobombela Stadium comes into view – an impressive landmark in the distance (although to my eyes it looked about 15km away!).

After dropping the better part of 900m over 46km, there is a nasty sting in the tail with a steep climb to the stadium (for those familiar with the Kaapsehoop route, this is the only similarity between the two courses).

The 50km and marathon start at the same time so you get a boost overtaking the slower marathon runners towards the end of the route. As I hurtled towards the finish line, I spotted the familiar figure of Shawn Combrink looming in the distance and managed to goad him into running a couple of kilometres with me.

This was Shawn’s 237th marathon/ultra (112 of these are unique and this was different standard marathon #83). He is ably seconded by his partner Paula, who normally runs the half marathon and then coerces Shawn to the finish line by seducing him with beer at various points along the route. I am not sure whether Shawn tired or my conversation or my pace but, once we hit the climb to the stadium, he pointed out another runner in the distance and suggested I play “catch” (it could also be that Paula was about to appear with his next beer and Shawn didn’t want to share).

As it was, I could not waste too much time as I needed to get to the airport for a 13h15 flight. I was flying to Cape Town (incidentally at 3 hours this is the longest direct domestic flight in South Africa), so the main urgency was to get to the hotel with enough time for a shower (doing my bit to extend Day Zero – I have not done any shower speedwork and would probably only be able to clean half my body in 2 minutes!).

I might not have made as much money or have had as many children (or wives) as some of my classmates, but I can proudly boast to having run more marathons than any of them! After completing the easiest ultra marathon in the country, the true test of my endurance capabilities would be to see if I could still keep up with my classmates that evening. I think I passed the test – lasting until about midnight (but managing to escape before the tequila shots came out)!

10 Replies to “Uniwisp Fast 50 (The Fastest Ultra in Africa)”