The Kosmos Marathon in Secunda is an easy 90-minute drive from Johannesburg – this is below the “stayover for the night vs. drive on the morning” threshold so I was up just after 3am to get to the 6am start. After eight consecutive Friday nights away from home to run different marathons around the country, I enjoyed the novelty and comfort of sleeping in my own bed before a race – although my daughters were not impressed that their weekly camp out with mom was cancelled! 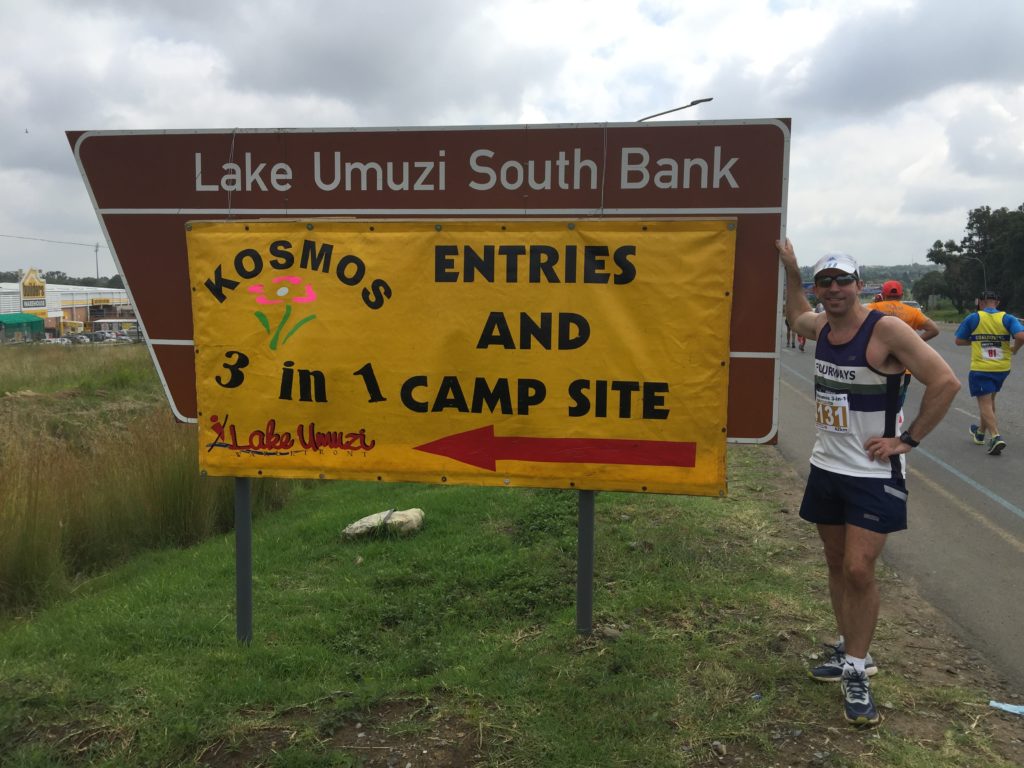 The race starts at the Lake Umuzi Lodge and Resort – despite this being a big race, traffic and parking were not an issue as there is plenty of space and there are multiple access routes into the resort. The resort benefits wonderfully from the event – there are several accommodation options but all sell out with runners and their families making the most of a marathon weekend.

Lake Umuzi looks like a great place to spend a weekend. While mom and/or dad are running there are plenty of activites for the kids like a water park, adventure golf and play areas at the resort. I had parked in front of the Lake Umuzi Box Office, noting that the resort also doubles as the town’s cultural hub and that an artist delightfully named “Snotkop” (Snothead) would be playing later that week. If you want to see what you missed out on you can watch the video for his hit song “Cool soos Koos Kombuis” here.  Not my taste in music but he does have about 129,000 more Facebook followers than The Running Mann – so who am I to judge!

I follow a Just in Time approach for races and joined the back of the field as the gun fired. It was a slow start as over 2,000 runners headed out into the mean streets of Secunda. I was in no rush and slowly moved through the field, enjoying the singing and chanting from the many pacing busses that were helping runners get to their Comrades seeding goal times.

The marathon route is very flat – a total change in elevation of just 237m over 42km (to put this in perspective my standard 15km route around Bryanston is 232m) – and is a single lap (which I prefer) around the suburbs.

To fit one full marathon lap into Secunda you run just about every residential street which means there is constant twisting and turning – it felt like you never ran more than 500m in one direction before making a turn. The race is organised by the Secunda Marathon Club and I think that they designed the route to make sure you run past every one of their club members’ front door!

What the race lacks in natural beauty it more than makes up for with its spectacular support tables. The 21 tables are coordinated by the local schools, businesses and churches – a lot of effort had gone into decorating and branding each one. Every table had a buffet of snacks to choose from – I tucked in and think that this was the first race where I finished significantly heavier than when I started!

There was a large contingent from the Fat Cats athletics club – they are one of the more festive clubs in Gauteng and always seem to be having a good time whenever you see them. As the name would suggest, they are naturally attracted by the large amount of food on offer at Kosmos. In fact, I understand that before they started making their annual binge-eating trip to Secunda, the club was just known as the “Cats”.

I managed to have a bit of fun at (the expense of the) KPMG table. There were a number of smart young gentleman manning the table and I asked them quizzically what the acronym KPMG stood for. One of them screwed up his eyes in concentration and proudly produced what sounded like a plausible answer. His proud look turned to one of disgust when I retorted, “Oh, I thought it was ‘Keep Paying More to the Guptas’!” and trotted off.

Speaking of auditing firms, it’s nice to see that the title sponsors of the race are the very reputable firm of PwC. It’s great that one of the big consulting firms sponsors a (fairly) small town race – well done and thanks PwC!

Along the way I got chatting to Anton from Randburg Harriers. Anton is an Eastern Cape migrant who tries to return home for a run as often possible. I met him earlier in the year at the Bay Ultra in Port Elizabeth (Randburg runners have sophisticated sense of humour and Anton is no different – he highlighted the fart jokes as his favourite part of the race report). I was informed of a great small field ultra in April that I “had to do” – the Bruinjieshoogte 50km in Somerset East. I was pleased to reply that a family holiday has already been planned around this race (along with Oteniqua Marathon the following weekend).

However, our conversation was somewhat stilted – Anton seemed distracted and kept looking over his shoulder. He told me he was looking for his wife and every now would stop to wait for her – after a few minutes he would come charging past me again so I can only assume he was actually just making sure that his wife didn’t finish ahead of him. Note: I saw Anton at the finish but have yet to meet his wife. Well played Anton!

The official name of the race is the Kosmos 3-in-1 as it has a 42, 21 and 10km. For most races it is an either/or choice but Kosmos caters to the craziness of the common South African runner. After the morning’s marathon, you can run the half marathon at lunchtime and then the 10km at 5pm. So just how many people go for the full 73.3km? Amazingly, out of 2245 marathon entrants, 1945 went on to do all 3 distances.

Kosmos is a popular choice as a Comrades long training run – most Comrades long runs are 60km long but I guess it you are having rest breaks in-between you need to do an extra 13km. The good news is that if you’ve done the full 73km 15 times you get free entry in future years (and you also get a jacket when you complete your 10th, 15th and 20th races).

I normally enter the longest distance on offer and did feel like I’d taken the soft option by wimping out with “just the marathon”! I did have a valid excuse though – it was “Dads & Daughters Day” at my eldest daughter’s dancing school so I had an unbreakable afternoon date. I was not born with any rhythm in my DNA so dancing is a real challenge (much harder than running a marathon in my opinion). If you had to walk a mile in my shoes you would probably start running after the first few metres but wouldn’t be tempted to pull out any dance moves.

Maroon 5 sang about “Moves Like Jagger” but someone still needs to write (a satirical) song about “Moves Like Jogger”. I survived the dancing and was rated as “Better than expected” by my daughter. The added bonus was that my first foray into freestyle and rock & roll dancing was great cross-training – and worked off much of the food I had consumed during the marathon.

Although hardcore South African runners will tell me that I haven’t “really done” Kosmos until I’ve completed the full 73.3km, I am still claiming Kosmos as my 97th unique marathon. However, this does obviously mean that I will be returning to Secunda in future to do the full 3-in-1 and remove this blemish from my running CV!