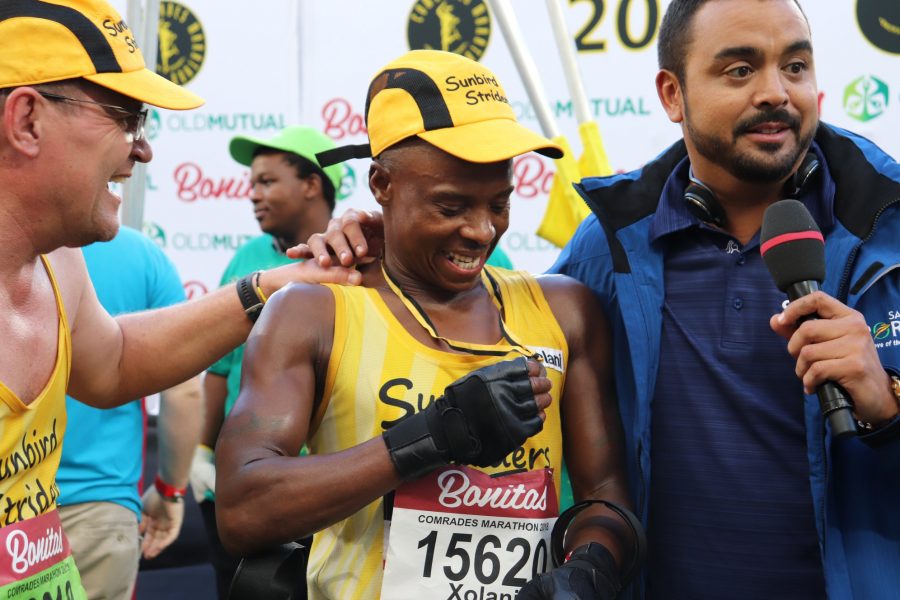 Letter of the Law vs the Spirit of the Law: An Open Letter to the Comrades Marathon Association (CMA)

There were some great performances at Comrades 2018. Bongumusa Mthembu won his third Comrades and became the first South African since Bruce Fordyce (the undisputed the King of Comrades) to claim back to back victories. Likewise, in the women’s race, Ann Ashworth had the race of her life – she started as an outsider but dominated a strong field for a convincing victory.

These were great performances. However, the one that will be remembered is that of a runner who finished way down the field amongst the last of the bronze medallists. This was the year that a one-legged cancer survivor on crutches hopped the longest Comrades in 23 years. The year that a former convict gained redemption. The year that a recovering drug addict who lived under a bridge for several years redefined what is possible. On June 10, Xolani Luvuno astonished and inspired a nation – and the 2018 edition of Comrades will be remembered as Xolani’s year.

I love writing about running. I particularly like to share interesting stories about races and runners. Before Comrades I was able to share some great stories – some I heard on the road, others I received in my inbox: A six-time Comrades finisher who was impaled 3.5km underground and came back for a seventh medal, a club mate running with an invisible but incredibly debilitating autoimmune disease called Lupus, a lifetime drug addict who found the road to recovery on a running track – and even a bit of comedy amongst all the drama with a couch to Comrades runner who got a DNF at Two Oceans and was only lining up for Comrades after a chance seating next to Caroline Wöstmann on the flight home.

These were impressive stories but they had nothing on Xolani. A few days before Comrades, I was on Facebook and saw a picture of Xolani standing next to Bruce Fordyce. I remember having a cocktail of thoughts fly through my head including, “Good luck buddy!”, “Wow, just wow!” and “What are the chances that he’s actually going to finish?”.

CMA, you started strong. There was no social media campaign to get Xolani to the start – you made a plan for him. You let him start five hours before the rest of us. This evening I watched the video of Xolani’s start. It was special.

It was just Xolani and Hein Venter (his friend, coach and the man he calls “father”) as well as a handful of friends and family. It was an emotional experience – fortunately someone captured it on their phone camera. There were no TV cameras or reporters around but you gave him the full fanfare anyway: Chariots of Fire followed by Max Trimborn’s cock crow and the firing on the cannon.

That’s a great start CMA, you guys flew out of the blocks. Unfortunately no one remembers how well you start, it’s how you finish that counts.

You got to Drummond and life was peachy. Social and traditional media were full of the stories of Xolani’s amazing feat (or in his case foot). But you don’t win Comrades at Drummond.

At Comrades, Drummond is where the questions start being asked. We asked you about Xolani’s medal. You responded with vague answers. After a couple of uphill walks, you started running again. A surge. Everything’s OK. A statement comes out that Xolani was indeed awarded a special medal and everyone celebrates.

You managed to keep the pace going through Kloof but the warning signs were there. The real race starts at 60km – doubts are once again cast on Xolani’s medal- you stumble down Field’s Hill and limp into Pinetown. Your challengers are asking probing questions and snapping at your heals. How will you respond?

CMA is cramping and it’s horrible to watch. It turns out Xolani didn’t get a medal from Comrades. CMA wobbles into Westville and suddenly seizes up – a media statement is released saying, “Sorry guys, we lied.” – but it’s OK because “We followed the rules and Xolani knew he wasn’t going to get a medal when he started.”

CMA, your rough patch has cost you. You can no longer win this race – but you can still salvage a finish, maybe even a strong one. Your supporters still love you. We want to see you dust yourself off and start running again.

On Sunday Xolani ran with #15620. In 1967, a runner started Boston Marathon wearing #261. Her name was Kathrine Switzer. A few miles into the race, an irate official called Jock Semple yelled, “Get the hell out of my race” and attempted to rip Switzer’s race number off her back. Her boyfriend, the burly hammer-thrower Tom Miller, pushed him aside and they carried on to finish the race. The photos taken of that incident are iconic. They are also an embarrassment to the Boston Marathon Association.

When asked his opinion of a woman running the marathon, Boston’s race director Will Cloney said, “Women can’t run in the Marathon because the rules forbid it. Unless we have rules, society will be in chaos. I don’t make the rules, but I try to carry them out. We have no space in the Marathon for any unauthorized person, even a man. If that girl were my daughter, I would spank her.”

How does history look upon Jock Semple? He’s reviled and ridiculed. And Will Cloney? Well he got good spanking of his own when women were allowed to legitimately enter Boston a few years later.

Cheryl Winn, Rowyn James – how do you want to be remembered?

Please don’t hide behind the rules. There’s the letter of the law and the spirit of the law. You guys make the rules and you have the power the break, bend or amend the rules.

Xolani broke the rules on Sunday. He changed the definition of what was possible. Most would not have expected him to finish – and no one could predict the impact a one-legged hero on crutches would have on South Africa. He astounded a nation. His effort is what Comrades is all about. He touched all 10,000 runners who passed him on the road to Durban. I was one of those runners.

I passed Xolani in Berea. I was tired, sore and feeling sorry for myself – but then I saw Xolani. He changed my perspective. At that stage of the race I didn’t want to talk to anyone but I talked to Xolani. I congratulated him. I even managed a decent attempt at the ‘click’ for the ‘X’. I told him he was amazing and asked if I could take a photo. He smiled and told me to go ahead. I realised that after running 82km I was suddenly smiling again.

Xolani’s smile infected me. A lot of people took photos of Xolani on Sunday. He’s smiling in every one of them. He was smiling when he started and he was smiling when he crossed that finish line. The only thing that hurt more than his leg on Monday morning would have been his cheek muscles.

So here we are CMA. Most of the race is complete but the most challenging part is ahead. This is where you are truly tested. The cameras are on you as you approach 45th Cutting and the finish. How will you respond?

When Vic Clapham founded Comrades it was to honour those who fell in the First World War. He was honouring heroes – and heroes get medals. Cheryl Winn (#3060) and Rowyn James (#1024), many years ago you were foot soldiers on this great journey between Pietermaritzburg and Durban. You are now the Generals commanding this magnificent race and its participants. Jock Semple will be remembered for trying to rip the number off a runner. Will you be remembered for denying the medal to one of our Comrades? Or will you be remembered as the ones who placed it around his neck?

I really hope that the Comrades Marathon Association acknowledges Xolani’s performance with an official finish and medal. Their wishy-washy, wordsmithed, ‘hide behind the rules’ press release does not leave me with a lot of confidence, it concludes, “we will apply our minds to the appropriate means of recognition”. I suspect that this means he’ll get a “Spirit of Comrades” Award.

However, there is an easy out: Create a new medal, a special medal to honour a one of a kind performance. I would suggest calling it the Frith van der Merwe medal to honour her one of a kind performance in 1989 when she finished 15th overall. As far as I know it would also be the first medal honouring a female athlete in South Africa (if not the world).

As for Hein, give him the Spirit of Comrades award. He’s also a hero but he’s got two legs like the rest of us so he can live without a 14th finish and medal – besides which, he’s got so many medals he’s giving them away!

The best of Xolani on social media:

Xolani’s back incredible back story:

Xolani dances through a water station:

An interview on SABC as Xolani nears the finish: