Once you’ve entered Comrades there is no backing out. There is no greater sin in South African road running than having a valid Comrades entry and failing to arrive at the start line unless you’ve got a really, really good excuse.

I am only aware of three valid excuses.

I should point out that this is how my wife got out of running her second Comrades. Although there are some ladies who’ve run Comrades pregnant (with their doctor’s blessing), protecting the safety of the next generation of Comrades runners is a valid waiver.

Invalid Excuse: “My wife is pregnant.”

If you have got your timing badly wrong* and your baby is due to arrive in the middle of June, you can choose to not enter. However, once you’ve submitted those qualifying details you’re expected at the start (besides which there is fantastic medical support along the route if your wife goes into labour whilst supporting).

* In a feat of incredible irony, Buks van Heerden, a man known for his impeccable pacing skills (many a runner around the country owes their Comrades qualifier and race medal to Buks’ pace-setting bus), got his own timing spectacularly wrong. Carolien and Buks’ first child was due in June so he wisely refrained from entering Comrades. On June 10, keen to experience his first Comrades, baby Kriztiaan decided it was time to emerge and arrived three hours into the race (around 8:30 am) just as the lead runners were descending Botha’s Hill. The van Heerden’s will no doubt claim this as perfect timing but I would propose that henceforth missing Comrades because you got your cadence wrong should be known as a “Buk up”.

Some really hardcore runners would argue that you would need to break both legs to earn a Comrades waiver and would cite amputee athlete Xolani Luvuno (who completed Comrades 2018 on just one leg using crutches) as the case study to support their stance.

However, most fair and rational  runners would accept the “leg break excuse” on the proviso that the fracture occurred within one month of Comrades. More than a month gives you enough time to heal and make it to the start.

Breaking your arm before or during the race is not a valid excuse either as illustrated by the following precedents.

Precedent One: The late Chet Sainsbury fractured his elbow right at the start of Comrades 1987 but carried on and still managed to run under 7h30 for a silver medal.

Precedent Two: Campbell “The Great Budgie Smuggler” Nel* once let a car drive over his foot to get out of running Comrades. However, when he broke his arm in March 2016, he knew he had to get back on the road as soon as he was discharged from hospital.  Undeterred, he ran Two Oceans a few weeks later and his Green Number run** three months later at Comrades 2016.

READ: Campbell featured prominently in the Umgeni Marathon report. See the article for the explanation of the Campbell “The Great” name (and derivatives thereof).

* Campbell terrorises his running group and the early rising residents of Kloof, Hillcrest and the surrounding Durban suburbs with his impossibly tight tights. The main impact to Campbell’s running during his “bionic arm” phase was having to trade his impossibly tight tights for normal shorts as he was not able to get adequate leverage or coverage using just one arm. His running friends look upon this brief period of respite with the fondest of memories – although they are still not able to buy vacuum-packed bags of dried fruit.

** There is a South African running myth that, once you’ve run ten Comrades***, you have to come back and run at least one more Comrades “in your Green Number”. In my opinion, this supposed rule only applies to fools and locals. I won’t pass judgement on the first criterion, but Campbell is a local Pinetown lad and was therefore was obliged to run in his Green Number on the ‘locals’ ticket.

*** After you’ve run ten Comrades you are no longer under any obligation to enter (although if you do run a twelfth you are expected to pursue a “Double Green” with 20 finishes). Campbell used the “more than ten” waiver to get out of Comrades this year****, in fact he is so proud of doing “more than ten” that he recently became the local distribution partner for Maurten hydrogel.

**** Fortunately for Campbell, the drug dealer’s mantra, “Don’t get high on your own supply” does not apply to sports nutrition pedlars (especially when your product is one of the best of the market). Campbell skipped Comrades this year to focus on his life-long dream of running a sub-3 marathon – and is hoping that the combination of massive intakes of Maurten, a customised Coach Parry training program and his own natural athletic ability will get him under the three hour mark at Cape Town Marathon in September.

This is definitely a valid excuse (running Comrades with flu is stupid and can be life-threatening). However, a doctor’s note is required. The last two years I have picked up a cold the week before Comrades. On both occasions I went to the doctor to check whether I was clear to run.

Like a parent about to find out the gender of your unborn foetus, most secretly hope for one outcome over the other, but will be perfectly happy with either (for the record my Comrades medical clearance was granted on both occasions and I have two daughters but have no comment on the preferred outcome in either scenario).

Ian Hendry (Green #55258) related the medical trauma in the build up to three of his ten Comrades runs:

“2013 – diarrhoea the week before Comrades, but Imodium on Friday afternoon got me to the start. Total glycogen depletion at the top of Fields Hill added a slight twist. I did manage to get to the last km with 14 mins to get under 11 hours. Finished in 11:00:44

2017 – rushed to hospital at the end of March in writhing pain – two kidney stone operations in April and a bit of rest got me to the start in good form. Finished in 8:55 to get my Green number”

This year Ian invoked the “done my ten, no need to enter” clause and now has his sights set on the 210km Drakensburg Grand Traverse.

Invalid Excuse: “I crashed my car on the way to Comrades.”

Even having a car crash on the way down to Comrades is not a valid excuse. This happened to me in 2011 – about an hour out of Johannesburg a guy fell asleep at the wheel, hit us from behind and wrote off our car. Luckily (other than one broken nail and a lot of shock) we were all fine so we got a lift back to Joburg, repacked the luggage into my wife’s car and started the trip again. 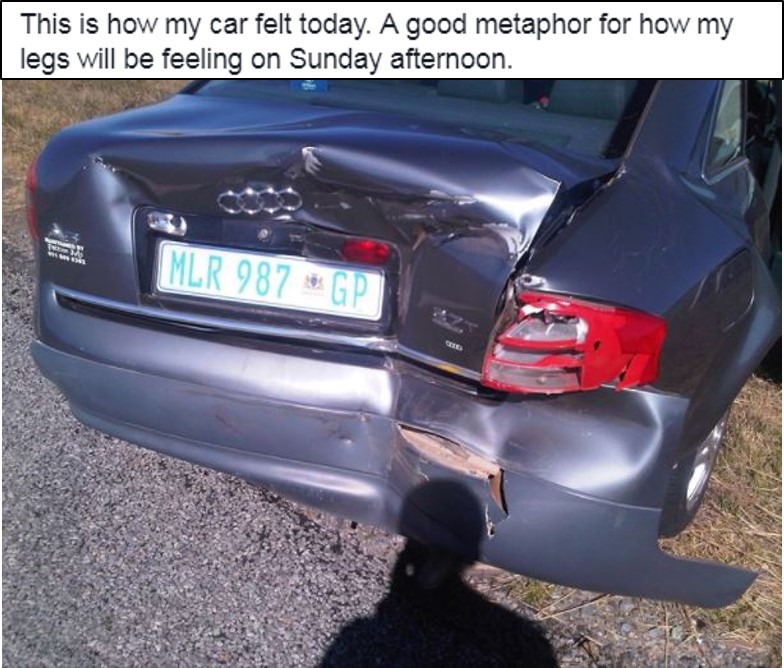 Just how tough is Comrades? READ: Comrades Strangelove or: How I Learned to Stop Worrying and Love the Run

Are there other valid and invalid excuses (ideally with precedents set by Comrades runners)? Let me know!