This is a list of all the races named after female runners outside of South Africa. There is currently just one race named after a female athlete in South Africa (whereas there are at over 60 named after their male colleagues).

Acknowledging female athletes internationally also seems to be something of a rarity – and is usually done in the form of a memorial race after the athlete has passed away. Below is a summary from the research I’ve done.

Note: This is an appendix to an article about the lack of races in South Africa named after female athletes. Feel free to let me know about any omissions and I will update the list.

Grete Waitz is a Norwegian running legend – and is widely acknowledged as Norway’s most successful long-distance runner of all time. She won the New York marathon nine times, London twice, was the first women in history to break 2h30 in the marathon, earned a silver medal at the inaugural women’s Olympic marathon (1984 in Los Angeles) and won the inaugural women’s Marathon World Championships. On top of all that, she won the Cross-Country World Championships five times and still holds 33 Norwegian records.

Sadly, she was another athlete taken too soon by cancer. When she died in 2011 (aged 57), such was her renown that she was only the sixth Norwegian women to be given a state funeral.

All the above was good enough to earn naming rights for the 10km event that forms part of the Oslo Marathon weekend. The 10km gets about 4,300 finishers each year. Although Grete’s 10km plays second fiddle in terms of finisher numbers to the half marathon (which gets about 7,400 finishers) and third fiddle (behind the full and half marathons) in terms of status, this is by far the largest and most prestigious event honouring a female athlete.

Pat Kippax was a British Olympian who ran in the inaugural women’s Olympic 400m at Tokyo (1964). Pat lost her battle with cancer in 2009 and the following year Cambridge Harriers organised this event for female athletes. Pat clocked a 54.4 in Tokyo – and there is a bonus prize available if you’re able to better it. To date the best effort has been by Rachael Dickens who ran 55.01 in 2014.

Leila Taylor was a popular local runner who also died from cancer in 2013. She completed over 200 marathons and this is a lowkey, four-lap marathon to honour her memory. All entry fees are donated to charity and there is no prize money.

This is the only annual marathon in the world named after a female runner.

Aside: Although there are no ultras named after female athletes, there used to be a Helen Klein Invitational 50 miler in northern California. Helen was the first female ultra runner to be inducted into the USA Track and Field Hall of Fame and held 75 age group records (she only started running at the age of 55 and ran close to 200 ultras of 50 miles or more).

In the UK there are several events companies who organise “no prize money, add to your marathon count” running events as a business. One of these companies, Hare & Tortoise Running, is doing a themed series on “Sporting Legends” – and have selected legends is Paula Radcliffe as the theme for an event .

This is a once-off 6-hour timed event. Each lap is 10.54km so four laps gives you a marathon and anything more than that an ultra.

Pembrokeshire Harriers honour one of their local runners who passed away with a small field (less than 100 runners) 10km race.

Jane Tomlinson started a charity to raise funds for children’s and cancer charities when she was diagnosed with terminal cancer. She was the first person to run London Marathon with terminal cancer and followed this up with many other endurance events like riding 4,000 miles across the width of the USA.

She raised over £1.8m before she finally succumbed to cancer in 2007 (age 43). The Jane Tomlinson Appeal continues her legacy with a series of running events for charity and have raised an additional £10m.

From what I can tell, this is the only race in the world named after a living female athlete.

Sonia O’Sullivan is an Irish running legend – her most notable performances were over 5000m on the track where she earned a silver medal at the 2000 Sydney Olympics as well as a gold at the 1995 World Championships. She set a 2000m world record of 5:25.36 in 1994 which still stands. I was told that parts of Ireland came to a standstill when Sonia O’Sullivan was running a televised race.

Her hometown of Cobh recently renamed a 10 mile race in her honour. The event had 800 entrants this year. The proceeds are donated to cancer related charities and athletic development.

Aside: The Scottish town of Musselburgh (known as the “Honest Toun”) honoured their most famous track athlete, Yvonne Murray, with a horse race in the 1990s. Yvonne won the 3000m bronze medal at 1998 Seoul Olympics and followed this up with a host of gold medals at World Championships, Commonwealth Games and Europeans Championships. Yvonne received an MBE from the queen in 1990 and was inducted into the Scottish Sports Hall of Fame in 2007.

The “Yvonne Murray M.B.E. Handicap” was held from 1994 to 1998 to honour her achievements. The race was high profile enough to be televised live. Yvonne and family would be in attendance to hand out prizes and she was known to have a ‘wee flutter’ (or bet) on the results of her race.

Julie Rose was a track and cross-country athlete. She was the first athlete from the local Ashford Running Club to gain international colours and was particularly dominant over 1500m, winning the English Schools Championships at all age group levels.

At that stage, there were no training facilities in Kent (all training was carried out on the roads) so she accepted a scholarship to Iowa State University to further her running ambitions. She continued to excel but was tragically killed in a plane crash with her team-mates whilst returning from the US National Cross-Country Championships.

Following her death, The Julie Rose Memorial Fund was created to develop local athletics facilities and ultimately resulted in the construction of The Julie Rose Stadium in Ashford.

There is also a Dorothy Hyman Sports Centre in Barnsley, UK named after the English sprinter who won three medals (one silver, two bronze) at the 1960 and 1964 Olympic Games.

The Martha Moats Baker Memorial 50Km (or MMB for short) is a low-key, no-fee ultra trail run over the Wild Oak Trail in Virginia.

Although Martha Moats Baker was not a runner, the story of the race name is an interesting (albeit tragic) one. In 1925, Martha Moats Baker wanted to visit her parents in neighbouring  Pendleton County. She left her home on foot and made her way over the Brushy Mountain. Unfortunately she never arrived and is thought to have died from exposure on the mountain.

A memorial was erected on the spot where she was found and this gives the race its name. 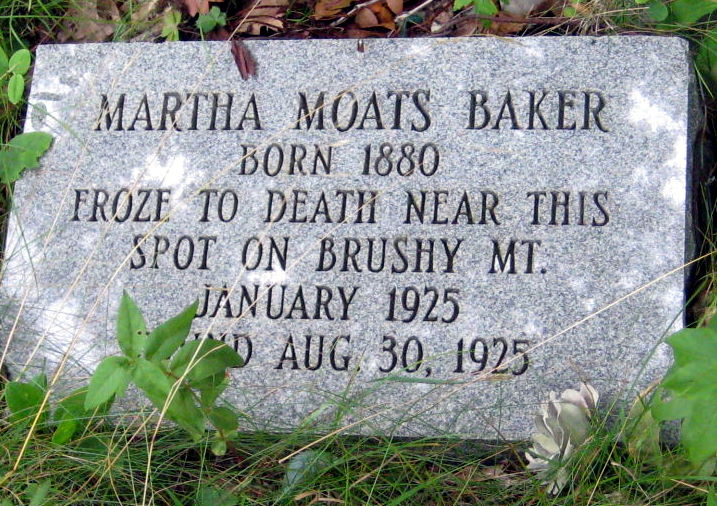 Note: All photos in this article were sourced from Google search. Where listed, I have credited the photographer/copyright owner. Please let me know of any omissions and I will rectify.