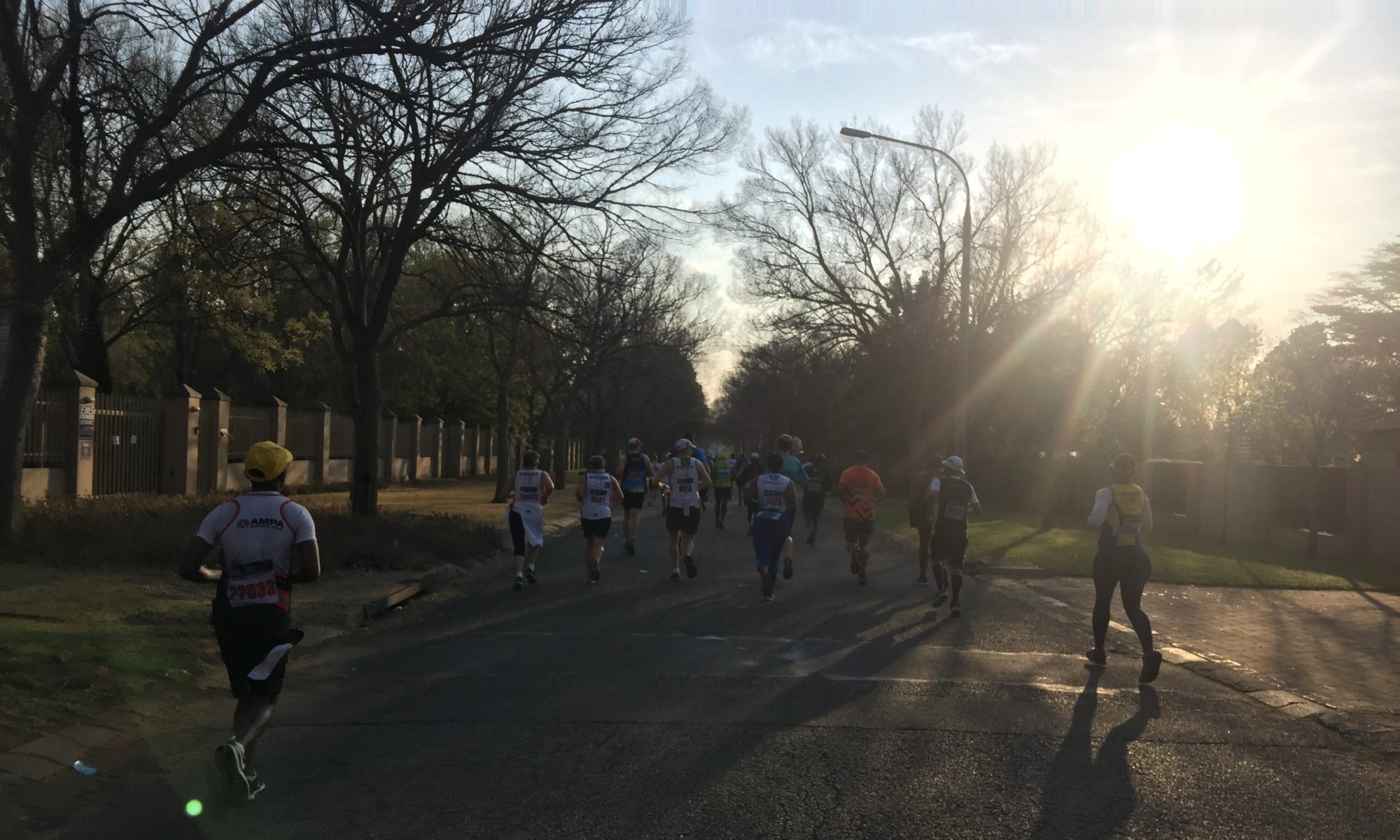 Sir Isaac Newton’s third law of motion states, “For every action, there is an equal and opposite reaction.”

Science was my worst subject at school and I absorbed very little knowledge. However, Newton’s third law is one of the few snippets that stuck*. Restated, Newton’s third law means that for every attraction there is an equal but opposite repulsion. An example of this is the Bermuda Triangle (that sucks people and objects in) which would need to be countered by an equal but opposite place on the planet that repulses one with extreme vigour. My theory is that the opposite of the Bermuda Triangle is the Vaal Triangle.

The industrial towns Vereeniging, Vanderbijlpark and Sasolburg make up the Vaal Triangle. My rigorous research could not uncover anything that the towns are famous for but, according to Wikipedia, the Vaal Triangle is “infamous for its air pollution and respiratory disease” and is colloquially known as the ‘Vuil’ (Afrikaans for ‘dirty’) Triangle.

The other two towns in the Triangle have well established marathons (the 24th Sasol Marathon in Sasolburg and the 44th Vaal Marathon in Vereeniging were held in February and March this year respectively*). Last year the running fraternity of Vanderbijlpark decided to fill in the final dot with their inaugural marathon.

* I have run both (just once) and can’t remember anything exciting happening at either. The area is notoriously flat and boring. Therefore, the attraction of running a marathon in the Vaal Triangle can be likened to playing the triangle in an orchestra – it’s simple and easy to do but you are unlikely to get earn any credibility with fellow musicians in doing so.

Imaginative marathon names are not much of a feature in this part of the world. When naming this marathon, the organisers settled on Vaal River City Marathon (which does cause a bit of confusion with Vereeniging’s plain old ‘Vaal’ marathon).

In general, Marathon organisers pay little heed to advertising standards and tend to take flagrant liberties when naming their races. I once ran the Dolphin Coast Ultra expecting to enjoy a sea breeze along vast stretches of pristine coastline for much of the race (and maybe the chance sighting of an actual dolphin): Although the race started a few hundred metres from the sea, we were directed inland, spent the majority of the race navigating through sugarcane fields (and over every hill in the area) and finally caught a glimpse of the ocean at the top of a steep incline right at the very end of the race. Likewise, you should not expect to see a river of any kind during the Vaal River City Marathon* (and depending on your definition of civilisation, it is also highly debatable whether you see a city either).

* I did contact the organisers several times via email and their Facebook page to try to get feedback on various questions including whether the route was prescribed by the traffic authorities and whether there was any possibility to incorporate a stretch alongside the Vaal River. Unfortunately, no reply was received.

My standard description of a boring route is “two laps around Benoni” (as in, ‘that wasn’t the most exciting course but at least it wasn’t two laps around Benoni’). There are exceptions to every rule and the Vaal Triangle is the one place on earth where a comparison to Benoni would be taken as a compliment. Expecting great views and excitement in Vanderbijlpark is like expecting to have a wild and raucous party in a retirement village – it’s remotely possible but if you do find yourself having the time of your life at Aunt Dolly’s 90th birthday party, it’s more likely that you need to get out more.

However, the race does have its redeeming features. I am always wary of new races as I have been on the receiving end of teething issues several times (see examples below). This was just the second time that the race has been held and, although the finisher numbers doubled this year, the entire event was exceptionally well organised and went off without a hitch.

READ: JM Busha Peace Marathon (A Tale From The Tavern)

The race also provides the early birds an opportunity to do one of the first Two Oceans and Comrades qualifiers in the country (and the very first in Gauteng).

The support tables were good with cold water, Coke and the odd snack available. Crowd support was sparse but, with the lap finishing near the Vaal University of Technology, there was some vociferous support from a few students who were ending their own all-night marathon (the end of the second lap was more docile as none of the all-night revellers had the staying power to last until then). 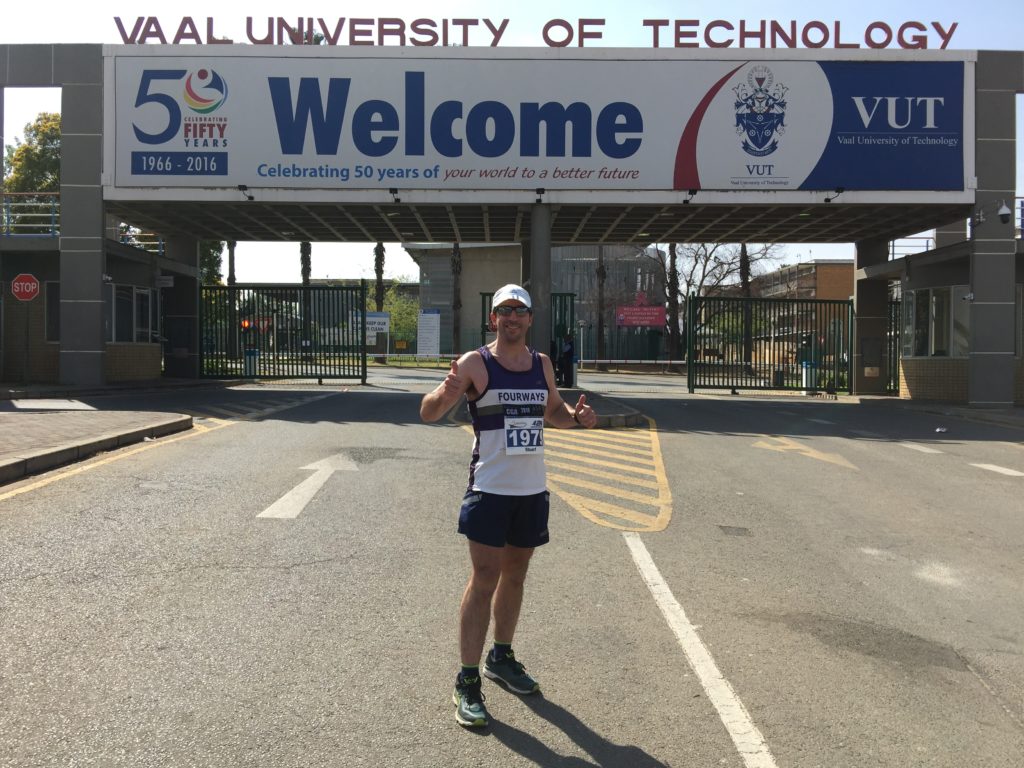 The route is two largely flat laps. Although there are a few gentle inclines and declines, it would be a stretch to call them hills (they would only be referred to as hills if you were running a World Marathon Major). There is not much in the way of beautiful scenery over the 21km lap with the short stretches through the leafy suburbs being the highlight. I took the least number of photos during this race since I started writing these reports one year and 30 marathons ago.

However, there was a great spirit amongst the runners and there was plenty of chatter about plans for the season ahead – for many this was a ‘shake out the cobwebs after Comrades’ marathon.

Probably the most interesting part of the route was seeing the graphic design art on the bodies of souped-up cars (unfortunately they flew by far too fast for me to photograph). Most of the designs were a combination of skulls, flames, ferocious felines and voluptuous females.

Ironically, Newton’s laws of motion laid the foundation for classical mechanics (although there are plenty of mechanics in the Vaal Triangle, I doubt many of them are interested or trained in anything classical). Therefore, I was not expecting to see anything cultural or classical in Vanderbijlpark but life is full of surprises. I was distracting myself from the monotony of the route by reading road name signs (most of whom had Great Trek or pre-1994 political connotations), when the sign below popped up out of the blue.

The only other interesting thing to happen on this race was just before the finish when my Australian brother tried to WhatApp call me (we normally try and catch-up every fortnight or so). I replied back matter of factly, “Sorry can’t chat now as I am just finishing a marathon”. Shortly after the race I reflected that it was a pity he didn’t phone a few kilometres earlier because, despite high data charges, I probably would have answered and enjoyed a long chat just to alleviate the boredom.

After 42km flat and boring kilometres, the race suddenly bursts into life at the finish venue inside the Izak Steyl stadium. The atmosphere inside was great with several stalls selling paraphernalia and group dancing keeping the crowds entertained.

See below the post-race entertainment Vaal Triangle-style. If you can pull these moves off after a marathon you obviously didn’t run hard enough! You might remember Gangnam Style – I understand this is known as Izak Steyl.

The big question is always, “Would I run this race again?” The answer is a qualified yes. If you’re an extravert with a boring but dependable friend and no better options, spending a morning with him (even though it might be tedious at times) is generally preferable to spending the morning by yourself. As it stands, this is the only marathon on the South African calendar on the first weekend of September so, unless some more exciting options emerge, I am likely to be back to run a couple more circles around the Vaal Triangle.