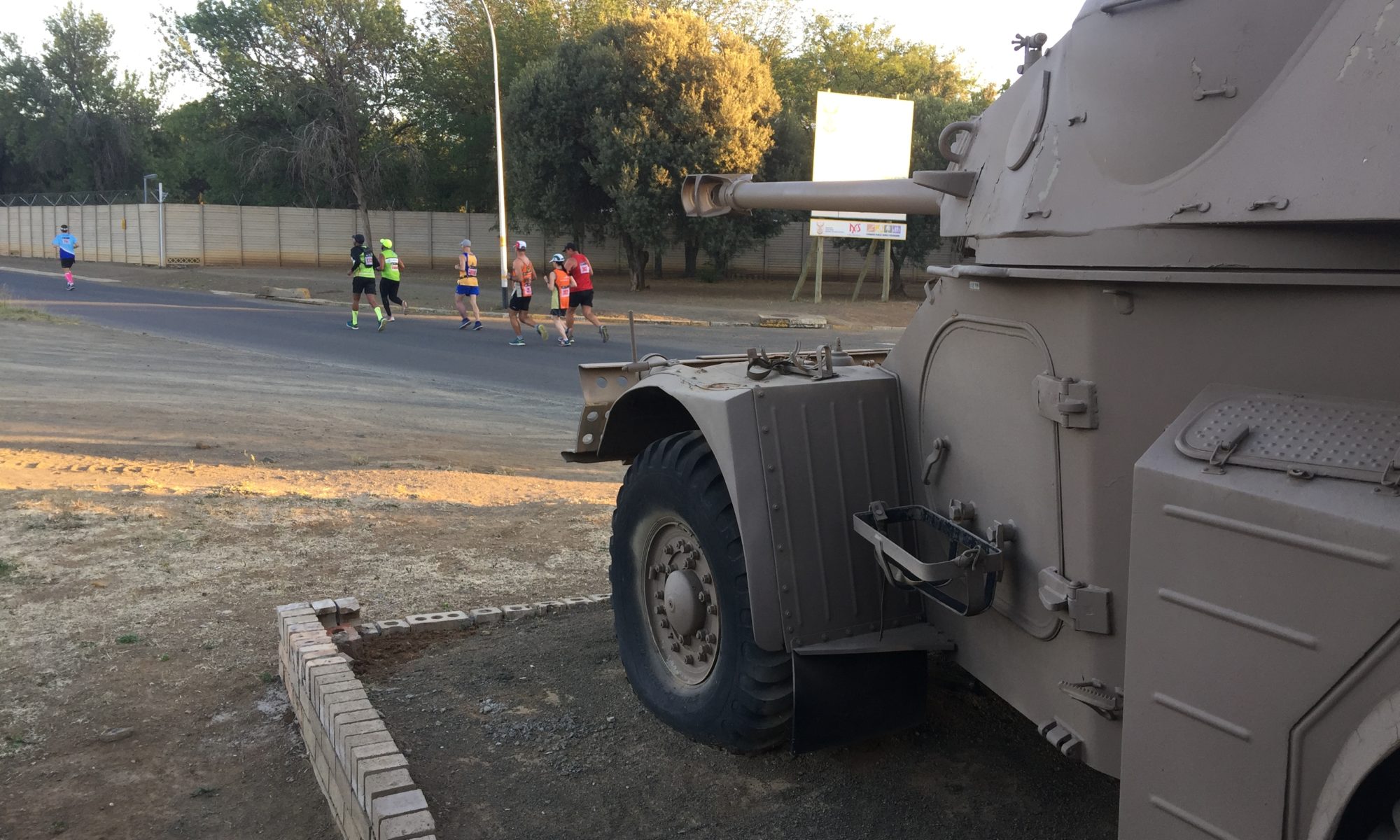 I recently researched the most geographically extreme marathons in South Africa. This quickly led to me wondering which is the most central. It turns out that the geographic centre of South Africa is very close to Bloemfontein. I’ve seen many people use the word ‘literally’ when they mean figuratively (e.g. as in, “I’ve literally seen thousands of people using ‘literally’ incorrectly.”). However, if you were to say, “Bloemfontein is the dead centre of South Africa.” this would be true in both the literal and figurative sense of the term.

I’ve run several marathons and ultras in the Free State but have managed to avoid Bloemfontein, South Africa’s seventh largest city and judicial capital, until now. In fact, I’d never even spent a night in Bloemfontein before entering the Music Marathon. Legend has it that Bloemfontein is hot, boring and flat so I decided to put these stereotypes to the test.

A little-known piece of trivia is that the author of Lord of the Rings, J.R.R. Tolkien, was born in Bloemfontein in 1892. He only spent the first three years of his life there (the death of his father necessitated that the family return to England). Although John Ronald Reuel was bitten by an extremely venomous baboon spider whilst living in Bloemfontein, he had no memories of this ordeal. In fact, he retained just one solitary memory from his formative years toddling around the Free State – and that was of “a hot country”.

The Bloemfontein heat burnt deep into JRR’s subliminal conscious. Eventually the psychological scarring resurfaced when he literally (or should that be ‘literarily’) transferred his “hot country” memories from central South Africa to Middle-earth as the cracks of Mount Doom – Mordor’s fiery volcanic pit which was the only place hot enough to destroy the One Ring.

To counter the November heat, the race gets going just after sunrise at 5:30am. Although I am not a morning person, I was grateful that we got going early ran as much as possible during the coolest part of the day. It was already starting to bake at 9:30am when I finished – and the temperature rocketed from 26° to 31°C (79° to 88°F) in the half hour it took me to shower and pack-up before driving back to Johannesburg.

When people get bored they sleep. Some people get so bored that they can’t sleep – this is called insomnia. After protracted periods of extreme boredom-induced insomnia, idle hands start getting itchy and go to work. When a whole horde of incredibly bored people get together and pool their collective boredom, this phenomenon sometimes results in the birth of a new political party. The sleepless hollow of Bloemfontein has birthed the two political parties that have had the biggest impact on South African history – the African National Congress (ANC) in 1912 and the National Party in 1914.

Being the Music Marathon, and with the local radio station OFM as one of the title sponsors, there are several mobile music stations that jazz up the route with pop music from the 80s, 90s and 00s (sometimes it’s fun to mix your drinks, metaphors and music genres). The organisers aim to make this the most “colourful, music and fun-filled running event” in the country – and the support tables are encouraged to show off their artistic flair by theming themselves accordingly and providing regular musical interludes for the runners.

My pick of the race was the Guns N’ Roses* table. I had kept myself well hydrated at the preceding tables which meant I was able to provide some philanthropic assistance to a thirsty tree. Whilst I was taking a slash, I heard Slash’s guitar chords rip through the morning air whilst Axl Rose (somewhat ironically) belted out Paradise City.

* Highly appropriate since Bloemfontein is nicknamed the ‘City of Roses’ (I live in Johannesburg – the City of Guns).

Fact checked: Yes, Bloemfontein is quite boring but the organisers and support tables do a good job of keeping their runners entertained before, during and after the race.

There was nothing flat about this race – even the Twizza at the water tables was fizzy. The race starts and finishes at the Tempe Military Base (one of the largest in the country).

I managed to book a room at the closest B&B to the start (to stay any closer to the base, I would have had to enlist in the South African National Defence Force). The B&B (which I would highly recommend for future marathon participants) was called ‘Castle With A View’ and was on the marathon route – this should have been an indication of what was in store since good views don’t come without steep hills!

Much of the marathon is run over rolling hills through suburbia. Bloemfontein is about 1,400m above sea level and the marathon fluctuates between a fairly narrow altitude band of 1,390m – 1,470m. There are a couple of short, sharp pulls but no real monsters to overcome. Nevertheless, the cumulative elevation gains broke 600m (which puts this race on a par with Soweto Marathon in terms of climbing).

The first section was my favourite of the race, an opening 8km that explored every nook and cranny around the military base. It was really interesting running passed the various sections of an active, working military base. I also enjoyed inspecting the decorations strewn around the base in the form of retired tanks, cannons and other artillery – all of which makes for a unique running experience.

After exiting the base, you reintegrate with the civilian population as you head into the Bloemfontein suburbs.

The meat of the marathon is made up by a couple of long out and back stretches which patrol you through the northern and eastern extremities of Bloemfontein.

The northern section takes you all the way to the entrance of the Free State National Botanical Gardens. Unfortunately, you turn around at the gates – I couldn’t help but think it would have been a great feature to do a loop through the gardens and cut out some of the more boring suburban sections later in the route.

The eastern section that followed did start to feel a bit monotonous but the lively tables kept the boredom at bay.

Bloemfontein translates as “Fountain of Flowers” and is nicknamed the “City of Roses”. I kept my eyes peeled for some rose bushes on the route but came up short – even the second-best option of a nice colourful flower bed also evaded me. I did however find a solitary fountain.

I was keeping my eyes open when I noticed the poster below. I was intrigued to see that Heinz Winckler* was playing a free concert in Bloemfontein.

* For the foreign readers and those with more sophisticated music tastes, Heinz Winckler was the winner of the first season of the South African edition of Pop Idols in 2002. ‘Hunky’ Heinz dropped out of law school to pursue full-time music career, the highlight of which was singing a track on the soundtrack for Disney’s Treasure Planet movie.

It astounded me that, although the rest of the country has forgotten about poor Heinz*, he is still able to command an audience in Bloemfontein.

* You can book Heinz to play at your wedding, bar mitzvah or gran’s 80th birthday party on his website. His events calendar is also available and the good news it that looks like he’s completely free all December for all your personal Christmas entertainment needs.

The universe is a mysterious place. Some people claim divine inspiration, others go so far as to say that that God talks to them directly. I claim no such celestial connections, but I did stumble upon a inter-dimensional crossline during one of my runs and managed to overhear a conversation between God and Moses. It went like this.

God: It’s time to cast out some idols. Winckler, Heinz is next on the list.

Moses: Purgatory or hell for Winckler?

God: I was thinking somewhere hotter than hell and more boring than purgatory.

And that is how Heinz Winckler ended up in Bloemfontein.

Moses picks up the “People Who Deserve Heinous Trials, Torment & Tribulations” list: What about Darren Scott?

And that is how Darren Scott ended up at OFM.

As the Free State summer sun started to beat down we were reminded of the importance of water over the final 2km when we made it back to the base camp.

The drill sergeants made sure we completed a short final lap around the sports fields before we received an honourable discharge and could relax to the sounds of OFM whilst browsing the stalls and kids entertainment areas at the finish.

This was just the second running of the race and, according to the organisers, it is already the largest running event in the Free State with about 1,500 participants across the marathon, half, 10km and 5km fun run. The popularity is helped by a trio of great sponsors, OFM, Chatz Connect and Vodacom.

A few refinements in future years – and a little more military precision on the marshalling side – would transform this from a “nice to do” to a “must do” race. I would suggest a few route tweaks (like incorporating a loop through the botanical gardens), perhaps getting some of the local school bands to play along the route and making a bit more of the military angle. The race is run really close to Remembrance Day so it would be a fitting to formally honour fallen soldiers. It would also be quite special to get going with a 21 or 42-gun salute for the half and full marathoners respectively.