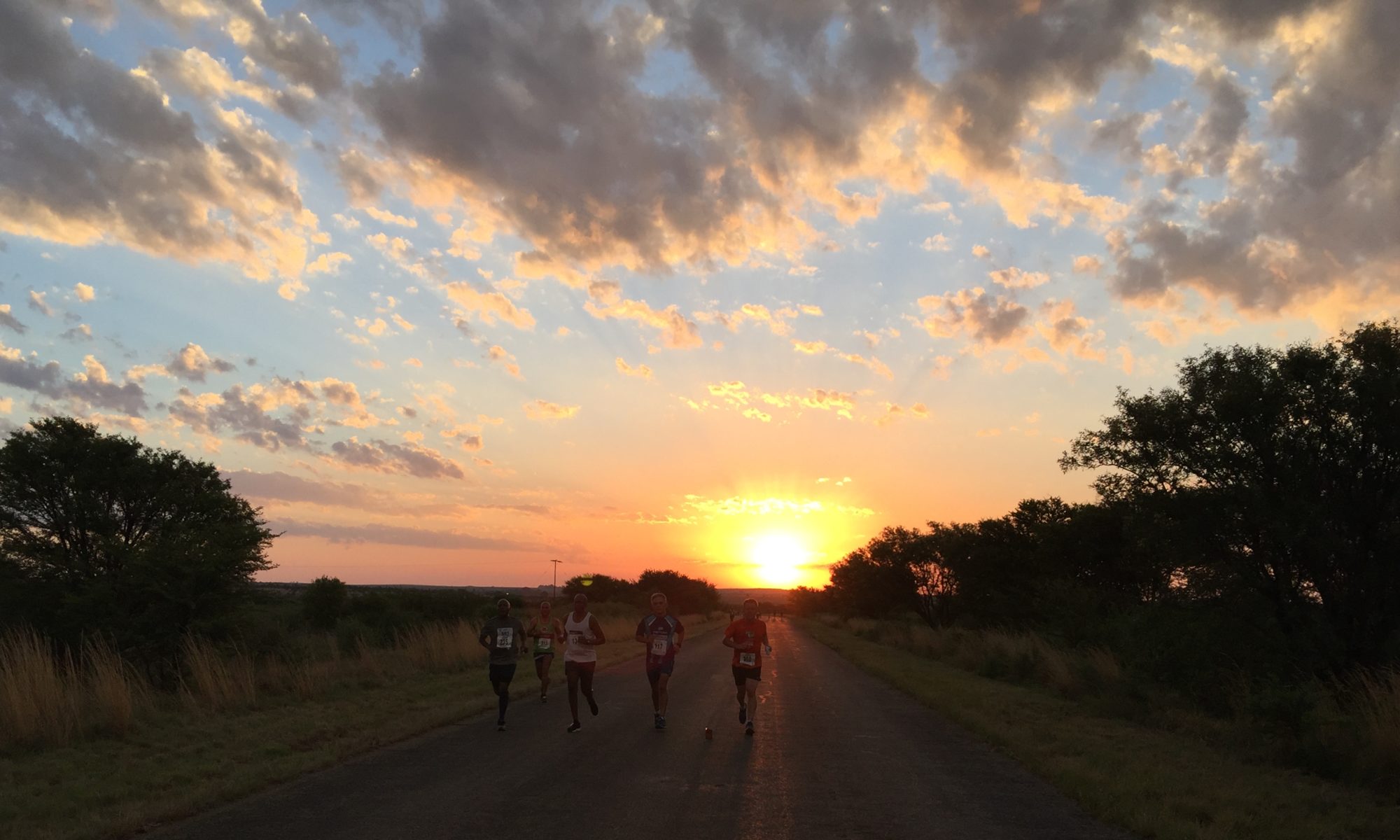 The Ottosdal Marathon is one of the last races left from my original running bucket list. The race is the subject of much folklore amongst the inland running community for two reasons:

* Similarly to driving, where anyone slower that you is a classified as a dithering idiot and anyone faster a raving lunatic; Anyone who runs less than you is an idle slacker and anyone who runs more is an absolute nutjob.

The three-hour trip due west of Johannesburg was largely uneventful until just outside of Ottosdal when there was a commotion at the side of the road. A bakkie’s canopy had popped open spewing cartons of cigarettes all over the road. I dodged around the stockpiling scavengers who were scuttling all over the road collecting as much loot as they could. There didn’t seem to be anyone trying to stop the foraging, so either the cigarettes were of the illegally smuggled type* or this is a new marketing technique from by the flailing tobacco companies.

* If so, Julius Malema’s landlord will not be pleased.

The idea for the night marathon was formulated in the early 1990s by the Afrikaanse Sakekamer van Ottosdal (Afrikaans Business Chamber of Ottosdal)* who wanted to improve the image of their village. After a series of newspaper reports had painted Ottosdal as a town ‘full of drunks’ whose residents had nothing better to do than drink themselves into a daily stupor, the Business Chamber wanted to do something positive that would involve the whole community as well as help heal political and social divisions. The result was the first Ottosdal “Nagwedloop” Marathon in 1995 with a diverse group of just over 200 runners completing the event.

* My rudimentary Afrikaans communication skills were relentlessly tested during my stay in Ottosdal and the emails conversations I had with the organisers – I think the last time English was spoken consistently in Ottosdal was during the Anglo-Boer War when the British built forts in the town.

With the dissolution of the Afrikaans Business Chamber , the race was handed over to the local Dutch Reformed Church and it was decided to run the marathon in conjunction with the annual church bazaar as, “a positive marketing of the village as a Christian community of integrity and a place of pride.”

The race grew steadily and became a favourite feature on the South Africa running calendar. At the turn of the millennium, they decided to enhance the event with the addition of some easier options like a half marathon and 10km option – and continued this trend with the addition of cycling events a few years later.

According to the 2011 census, Ottosdal has a population of just 884 people which, as far as I know, makes this the smallest town in South Africa to host a marathon*. To put this in perspective, about 1,200 people stay overnight during race weekend so the town’s population more than doubles overnight.

* The largest South African city not to host a marathon is Tembisa (followed by the fellow Gauteng towns of Boksburg and Krugersdorp) whilst the largest marathonless district and local municipality is Rustenburg in the North West province.

To cater for the influx of athletes, the town literally open their doors to accommodate everyone – with most of the local houses and farms using their spare rooms (and in my case the living room floor) to fit everyone in. There are also various camping sites around the town, on the larger properties and farms as well as on the grounds of the local churches.

I might have run over 200 marathons but, other than the year I ran Two Oceans with a broken toe and every time I’ve run Comrades, I have very little experience of long distance running in the afternoon. Much of the debate before the race was about what to eat. I went for my tried and tested morning routine of peanut butter and honey sarmies washed down with a cup of tea.

I arrived at registration to find the bazaar in full swing and there was time to do a little browsing and shopping while waiting for our 5:30pm start in front of the showground’s grandstand. After a trilogy of prayers (in Afrikaans, English and Tswana), the gun went off and we shot out of town.

The route is really simple, you head away from Ottosdal, are almost immediately in the countryside and then plough your way along the Bospoort road in a north easterly direction before turning around at precisely 21.1km and heading home. The road is tarred the whole way and is blocked off for the day, enabling the runners to enjoy a traffic free race.

There is a simplistic beauty of being out in nature as the sun starts to set. The profile is fairly undulating with no major hills but a few good pulls that will give your legs a good workout while the declines allow your legs to enjoy a few sundowners.

We headed out through the Tswaing municipality farmlands and countryside while a spectacular lightning storm blazed away in the distance – and the effect of the lightning on the horizon became more and more impressive as the skyline steadily grew darker.

Luckily for us the storm stayed in the distance and didn’t ruin one of the highlights (pun intended) of the race – 1,500 handmade paraffin lanterns. These are placed about 10 metres apart in the middle of the road on every second white line. The lanterns are lit as night falls to guide one back home.

I hit the halfway mark at dusk and, although it was quite dark running east, you turn around to find yourself running straight into a stunning sunset. Although I could only enjoy the sinking sun for a few kilometres, these were my favourite of the race and it almost felt like the sunset was sucking us into the horizon.

Once the sun had finally disappeared, a different illusion occurs as total darkness is juxtaposed by the flickering light of the lanterns. Unless you are running with a headlamp, visibility is limited to a few meters each side of you and the line of flickering lanterns in a vacuum of blackness make it feel like you are running on a treadmill. I expect one of the dangers of running too fast on this race would be getting tunnel vision.

One danger you don’t need to worry about is twisting an ankle in a pothole. This is probably the cleanest and best maintained road in the North West province since the townspeople scour the route for potholes and other hazards in preparation for the race.

The stillness of the night is only broken by the songs of the nightjar and, every few kilometres, by the lights (and loudness) emanating from the support tables. Each table has a generator, and many put in a great deal of effort to decorate their tables to make your brief sojourn through their oasis of light a memorable one.

Hopefully the people of Ottosdal keep the leftover lantern oil to counter the current spate of load-shedding. Speaking of load-shedding, if you do get your pre-race intake/outtake routine wrong, every table has a porterloo and I am pleased to report that this is the only race I know of that provides double-ply paper to ensure a soft landing for their athletes.

One of the first tables was coordinated by the learners from Klerksdorp High School – they gave enthusiastic support on the way out and were still the rowdiest table on our return around four hours later. People sometimes knock the youth but I was impressed with their staying power – they were opposite the town’s cemetery so it was appropriate that they kept in great spirits the whole time.

The cemeteries earliest gravestones were carved from pyrophyllite. This mineral, also known as “Wonderstone”, was formed over 3 billion years ago when clay metamorphized and Ottosdal is the only place in South Africa were pyrophyllite is found. Pyrophyllite is acid resistant and has excellent thermal stability so current uses include in laboratory equipment, electrical insulation and applications in various ‘high pressure’ environments.

Another very rare geological phenomenon found in the pyrophyllite deposits are the “Klerksdorp Spheres” (Klerksdorp is the closest large town to Ottosdal). The spheres initially caused geologists some confusion since they are 3 billion years old but appear to be carved. Subsequent studies explained the process that produces these natural marvels – but they became the topic of much folklore, wild claims about magical properties and unsubstantiated rumours of alien invasions which appear to originate from a 1982 Scope Magazine* article.

*Although it is unlikely you would have found a copy of Scope on the (top) shelf of the Ottosdal supermarket, it was the largest selling English publication in South Africa at peak. Everyone who bought it, claimed they did so ‘for the articles’ and the tabloid-style magazine was popular with amateur astronomers who would gaze at the various constellations of ‘stars’ featured in each issue.

Electric light returns over the last few hundred metres through town, allowing your eyes adjust to the brightness of the floodlights at the finish. The one downside with running the marathon is that, after a very long day for the locals, the festival is largely wound down by the time most of the 317 marathon runners finish. It’s understandable though since most of the local population are doing an ultra marathon of their own – waking up before 5am, working solidly until midnight (doing whatever needs to be done to ensure that the events and festival run smoothly) and when they finally return home it is to a house full of overnight guests.

There is one other major downside to this race: The risk that they have sold out of beer by the time you finish. As someone who is very partial to a post-marathon beer, 10pm is an inordinately long wait to quench one’s thirst in the way only a beer can. Having pushed my mastery of the art of delayed gratification to the limit, I was in grave danger of missing out altogether as there was less than a six-pack left in the fridges when I got in! The 200m from the finish line to the beer tent were definitely the fastest I covered all day.

However, whilst savouring a precious beer and waiting for some friends to finish, the positive side of finishing at the end of the bazaar was that an announcement was broadcast about a “Groot Tjop special” (that’s “Big Chop” – the kind you eat, not the kind you vote for) at the bargain rate of “ten bucks a Tjop”. Although I had to wait behind a long queue of tannies and oumas who were dropping R200 notes and stockpiling for the weekend, I am pleased to report that the Tjop I managed to secure was both groot and delicious.

After 202 day marathons, it was great to knock the only South African night marathon off the bucket list – this race might make you wait an age for your post-marathon beer but I definitely won’t wait until another 200 day marathons pass before returning for another nocturnal adventure in Ottosdal.