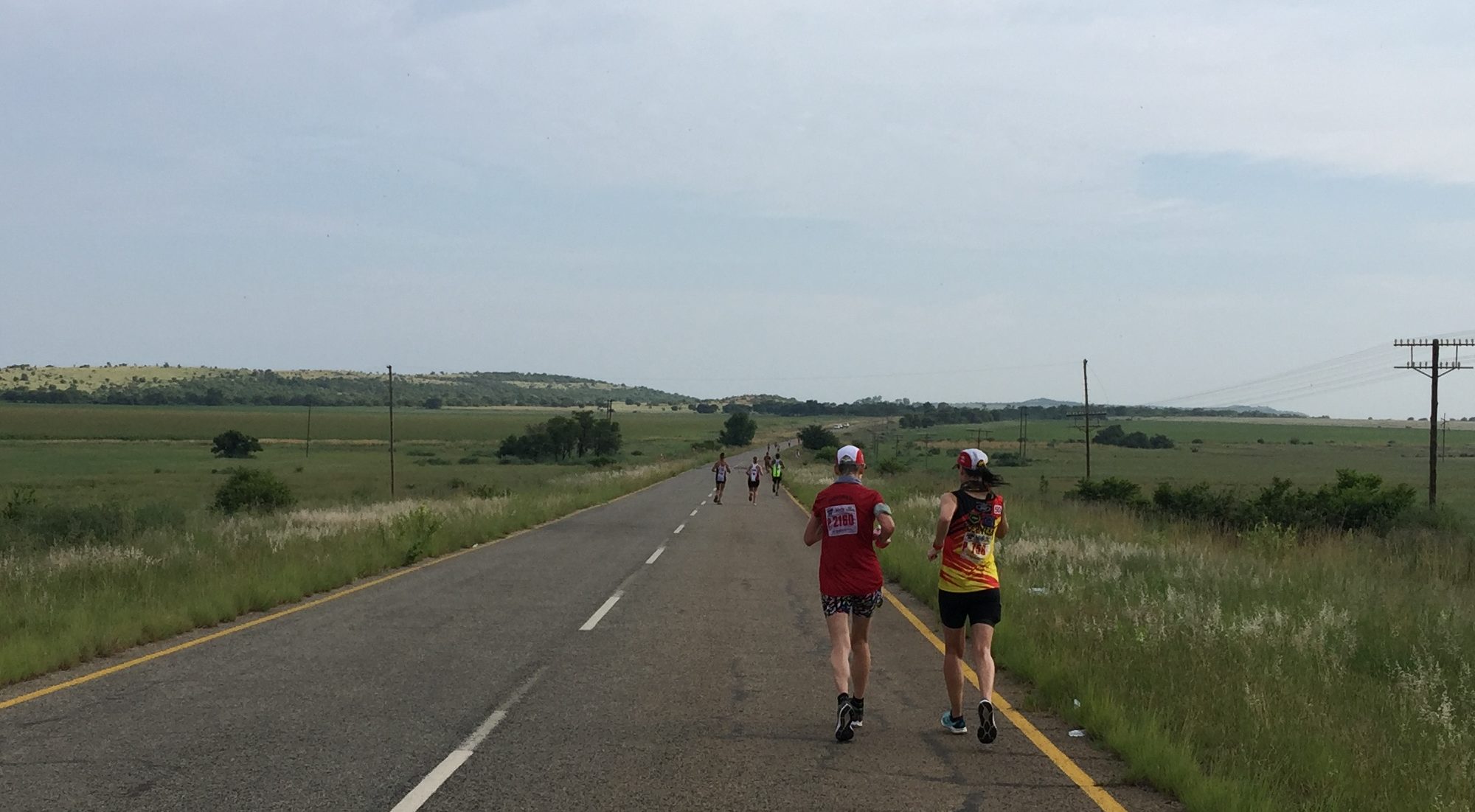 Klerksdorp was never high on my list of marathons to run. I almost ran it last year but then “got a better offer” and ended up doing Potties instead. There are some marathons that I look forward to doing and others I look forward to getting done – and I was expecting this to be one of the latter.

My only previous exposure to Klerksdorp has been driving through the city on the N12 – normally on the long drive to Kimberley for one of their marathons. People slow down to look at car crashes but they avert their eyes when driving through Klerksdorp. The only redeeming factor for Klerksdorp is that her N12 façade is slightly less ugly than that of her close neighbour Potchefstroom.

I was not expecting much when I entered the Klerksdorp Marathon – but I am pleased to say that I left with a completely different impression.

Maybe it could have been different for Klerksdorp if they hadn’t bastardised the name of the man after whom the town was named, the first landdrost (magistrate) Jacob de Clercq. But when they afrikanglicised the name to Klerksdorp they lost the ability to market themselves as a centre of French sophistication and the place to enjoy a quiet croissant.

Although my B&B put on a good breakfast spread (no croissants but there were muffins), I stuck to my tried and tested peanut butter sarmie and a banana before trotting off to the start at the Hoërskool* Wesvalia.

* Afrikaans, derived from Dutch, is a very strange language – there are some words and phrases that are just so beautifully perfect that they are untranslatable (an example is the ‘Bliksem’ sign I wrote about in the Mielie Marathon article). However, the nuances of many other phrases escape me – for example with a very slight change of inflection ‘Hoërskool’ can change from meaning ‘High School’ to ‘Cool Prostitute’.

Although Klerksdorp is the largest town in the North West Province, this is the only Two Oceans and Comrades qualification marathon in the vicinity* and there was a good crowd of about 500 (200 full and 300 half marathon) runners gathered on the school fields for a 5:30am start. A further 650 runners set off for the 10k and 5k an hour later (the 5k is run as a community project for some of the local children’s homes).

* The neighbouring town of Potchefstroom does have the very interesting Bert’s Bricks half marathon. This is an out-and-back route where you head out from the local rugby club and turn around at exactly halfway – which happens to be the site of Bert’s brick factory. Runners are invited to carry a brick back home – and if they managed to do so, they are awarded a 6-pack of beer for their efforts. Back runners need to be careful that they don’t twist and ankle on the discarded bricks strewn all over the road back to the rugby club.

You head out in darkness through the suburbs and I was pleasantly surprised by the apparent beauty of the area – but wondered if it was just a trick of the dawn light.

As the sun rose I realised I would need to reassess my opinion of Klerksdorp – but spectacular sunrises can do funny things to people.

However, full sunlight removed all doubt that my expectations and assumptions about Klerksdorp were grossly unjust. Behind the exhaust fumes and veneer of dour concrete buildings along the N12, there is a picturesque city with suburbs, houses and boundary walls that rivalled the best that Sandton cigarette smugglers could buy.

There is just one hill inside the Klerksdorp city limits – and of course they make sure to show it off to their visiting runners during the marathon. However, it occurs early on and provides a great view of the surrounding landscape so no one is complaining.

With all this unexpected glamour and beauty, the first 15km really flew by – this was aided by the fact that we had actually only run 13km. My post-marathon brag post on social media made an innocuous mention about a ‘marshalling error’ that opened a can of worms not seen since JFK got shot in Dallas.

Exactly what happened remains elusive – explanations, conspiracy theories and counter-conspiracy theories range from route maps and the lack of version control thereof, confusion between estate agent board markers and marathon boards, official race spray paint, unofficial marshal spray paint and route marshals showing off their artistic flair with graffiti tagging. No doubt the mysterious case of the ‘2019 Klerksdorp Marathon circumcision’ will be a major talking point in local bars for many years to come.

I have it on good authority (by local Klerksdorp runner Jaco van der Merwe) that training runs in Klerksdorp operate on the running equivalent of the Duckworth-Lewis* equation. That is, for every degree above 30C you cut your run 1km short (making the ‘long run’ something of a rarity in these parts). He suggested that this was the reason we only got to run 40km.

* For those who don’t follow cricket, the simple way to explain the Duckworth-Lewis mathematical formula is that it has screwed more South Africans than the combined conquests of Steve Hofmeyer and Jacob Zuma.

I however have another theory. The Protestant Church is fed up with the Roman Catholics getting all the media attention, movies and books written about their secret societies, hidden signs and clandestine machinations.

The Anglican Church is now hitting back with some subtle and furtive manoeuvres of their own: The most famous person to be born and raised in Klerksdorp is Anglican Archbishop Emeritus Desmond Tutu, the route was exactly 2.2 – or Tutu – kilometres short. Coincidence? I’ll let you decide.

After 15 Klerksdorp kilometres (13 actual kilometres) you start the out-and-back section on the district road towards the Faan Meintjes Nature Reserve – and the road leaving Klerksdorp provides a good test as to whether your car will handle the game reserve terrain with one kilometre of tarmac that looks like it only just survived a recent asteroid storm.

Other than the road surface, this is a lovely quiet stretch of farm road through the Matlosana countryside surrounded by unspoilt grasslands, koppies and ridges.

There is a gentle climb all the way to the turnaround point which means one can enjoy and easy trot back into Klerksdorp before attacking the final 8k through the city.

During this stretch I observed the reigning Miss Teen Klerksdorp hard at work handing out water to thirsty runners. As you can see she nailed the pageant pose (no catwalk required)! I’ve been working on mine for 205 marathons but don’t look nearly as good.

The stereotype of Klerksdorp being a one-horse town was further busted with a proliferation of stud farms that dominated this section of the route.

I posted the above picture whilst passing one of Arabian stud farms and got a swift response from the recently married Riaan Smit who identified his buddy, Stuart Mills, in the photo. Riaan seemed very keen to take the bit between the teeth and put Stuart out to stud.

This is probably a desperate attempt on Riaan’s part to save the friendship… Once you have been ‘broken-in’ and the bridal reins are firmly in place, your roughrider is liable to produce the crop and whip you into place if you continue to run with around with wild, untamed stallions.

As someone who likes a good cause and values the sanctity of friendship, I thought I would help Riaan’s efforts to ween Stuart off the wild oats with the following lonely hearts personal advertisement.

Stuart ‘not your average run of the‘ Mills guy

Ladies, this wild mustang is looking for a Sally to saddle-up with. Working for a bank, he’s good with money but is even better with his fingers – and can be found longingly strumming the strings of his guitar whilst singing sad love songs. He’d love to find a muse to serenade – but if a moonlight serenade on a summer’s night is not your thing, he does a bit of beatboxing in his spare time. Stuart is actively working on his communication skills by practicing ‘dog whispering’ on his Jack Russell puppy.

Stuart likes taking long walks on the beach, longer hikes in the mountains and even longer runs on the tarmac. It’s been said that if you think the way to a man’s heart is through his stomach, you’re aiming too high – but this is irrelevant in Stuart’s case since bachelor living has blessed him with MasterChef skills in the kitchen. If you think you’ve got what it takes to be the millstone around Stuart’s neck, you can stalk him on social media – or take out your lasso and run him down at road races around the country.

Full disclosure: Stuart does come with significant emotional baggage as he supports both Manchester United and the Stormers – but obviously has great self-esteem since he was seen wearing his Man United shirt in public even during the dark depths of the Mourinho-era.

The route is basically a pan handle with a half loop through Klerksdorp, a long out-and-back section through the countryside and then a completion of the loop through town on your return. With a little creativity the race organisers could have created some very naughty Strava art.

The last 6km are through Klerksdorp’s western limits before heading back into the school grounds. Many of support tables are organised by local restaurants and they proved that they are expert soda servers giving us ice-cold Cokes and Crème Soda to ensure our finish was as comfortable as possible.

Finishing at 40km did not seem right so I did a few laps around the school fields to make up the difference whilst looking on in envy at fellow runners who were cooling down with a lengthy wallow in a couple of ice-pools.

The pools were the perfect foil for weary legs and it was good to compare course notes and running stories with fellow athletes although the bags of ice didn’t last long in the Klerksdorp heat.

This is a really nice marathon to run and, being a short 2-hour drive, is an easy to get to out-of-town option for the Gauteng runners. The marathon taught me that whilst beauty is only skin-deep, one block of concrete may be all the separates ugliness from opulence.

From the book of clichéd wisdom, I already knew that you shouldn’t judge a book by its cover (or musicians by their cover versions) – and henceforth will no longer be judging towns by their main roads. However, I will definitely be back to run another Klerksdorp Marathon, if only to discover the missing 2.2k that they hid from us this year.