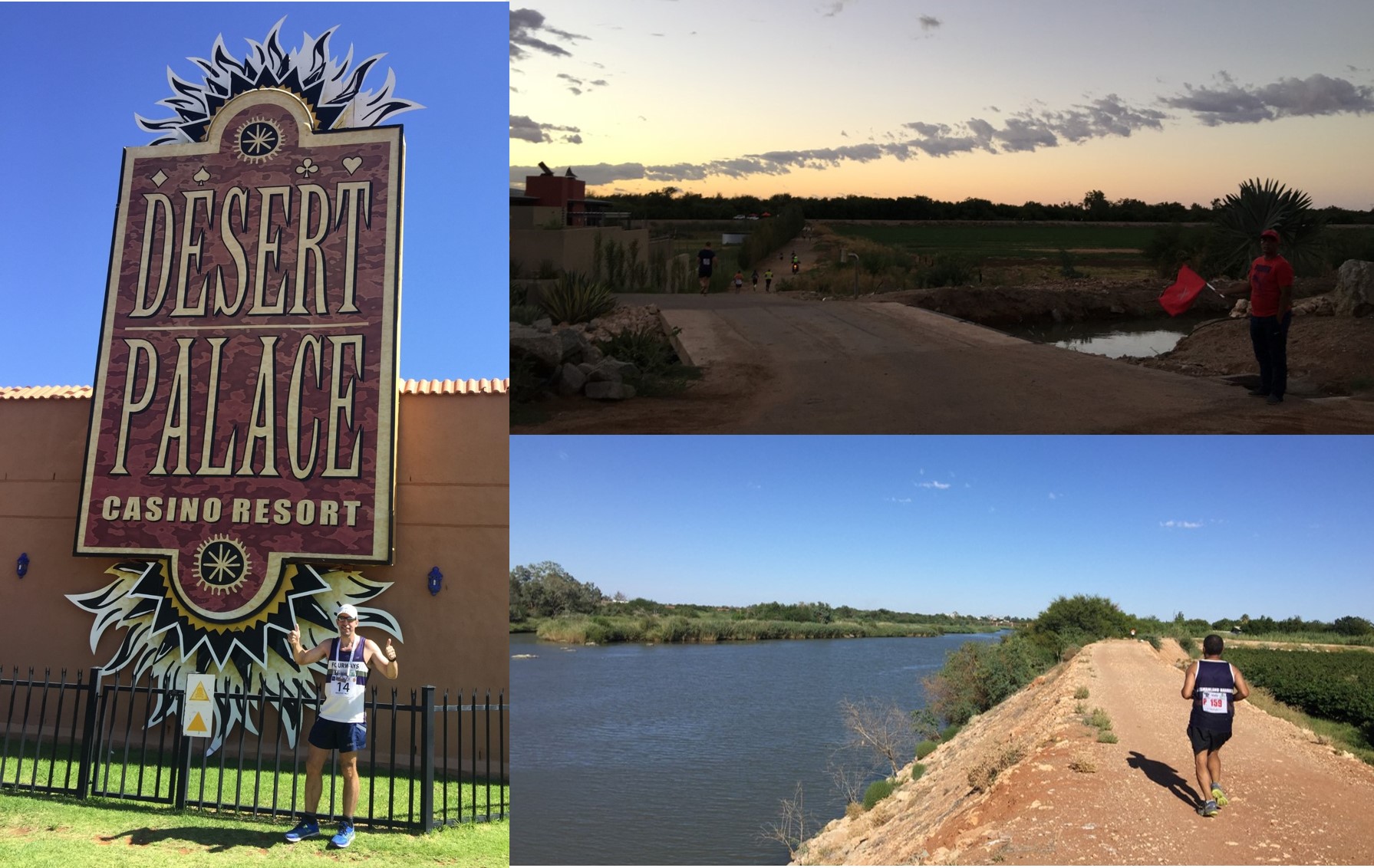 The Time: Just after 05h00 on a Saturday morning

The Place: Room 114, The Desert Palace Hotel and Casino, Upington

The Subject: The Running Mann

Setting the Scene: An alarm rings. A bleary-eyed marathon obsessive sits bolt upright after a restless night’s sleep. With well over 200 marathons under the belt, there is little that keeps our protagonist awake at night – but last night he slept a little less easy and there was a lot more stirring.

The Nerves: There is a slight look of unease in his eyes – could that even be glint of fear? Surely not. No distance – no matter how far, no hill – no matter how heinous, and no temperature – no matter how blistering could possibly perturb The Running Mann. And yet, something is different this morning – he looks a little agitated. The stench of nervous energy permeates the air.

[Enough of this third person nonsense, let’s move this article into the shoes of The Running Mann.]

The Laboratory Conditions: Why would I find myself awake at 5am in a hotel room in Upington? No prizes for guessing it’s to run a marathon. Upington is probably the hardest place to get to in South Africa to run a marathon – it’s a nine-hour drive from anywhere civilised (and four-hours from Kimberley, the nearest neighbouring city). With an average annual daily high of 36°C, Upington is officially the hottest town in a very hot country, a small green oasis in the middle of the Kalahari Desert.

The Gamble: Since I was staying in a casino I thought I’d take a massive gamble – one I would call “Runner’s Roulette”. The difference being that instead of placing all my money on the zero before spinning the wheel, I would be placing a gigantic bet on my nought.

The Missing Link: A quick scan of my hotel room shows my running kit neatly laid out on the bed as well as a modest collection of cosmetics on the bedside table – sunblock (for my skin), two plasters (for my nipples) and a can of deodorant (for my fellow runners). The keen-eyed will notice that one item is missing – Vaseline. Normally, I would take a large dollop of Vaseline and liberally grease up the engine room to ensure a comfortable run. 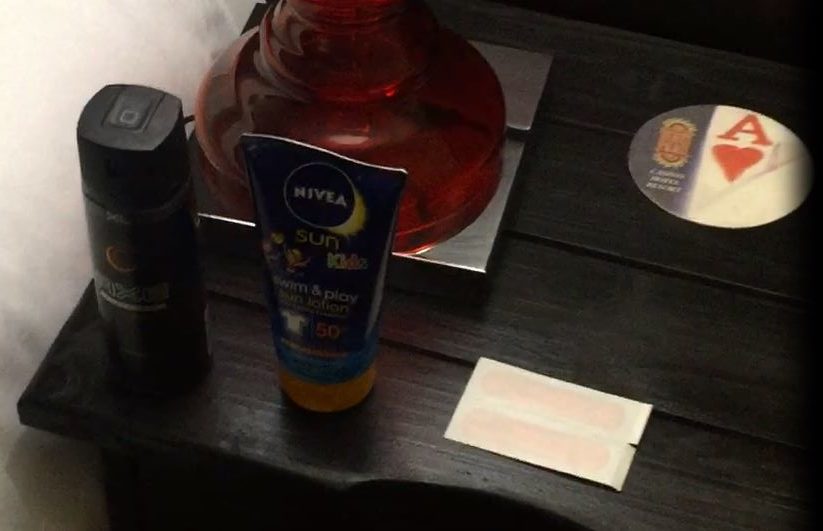 The Backstory: Earlier that week, I met up with Lezille Bouwer who recently acquired the South African agency for Runderwear, a British company that produces seamless, moisture wicking, anti-chafing running gear (primarily socks, jocks and sports bras). Their big promise is that your run will be “Chafe-Free Guaranteed” – and they back this up with money-back guarantee. 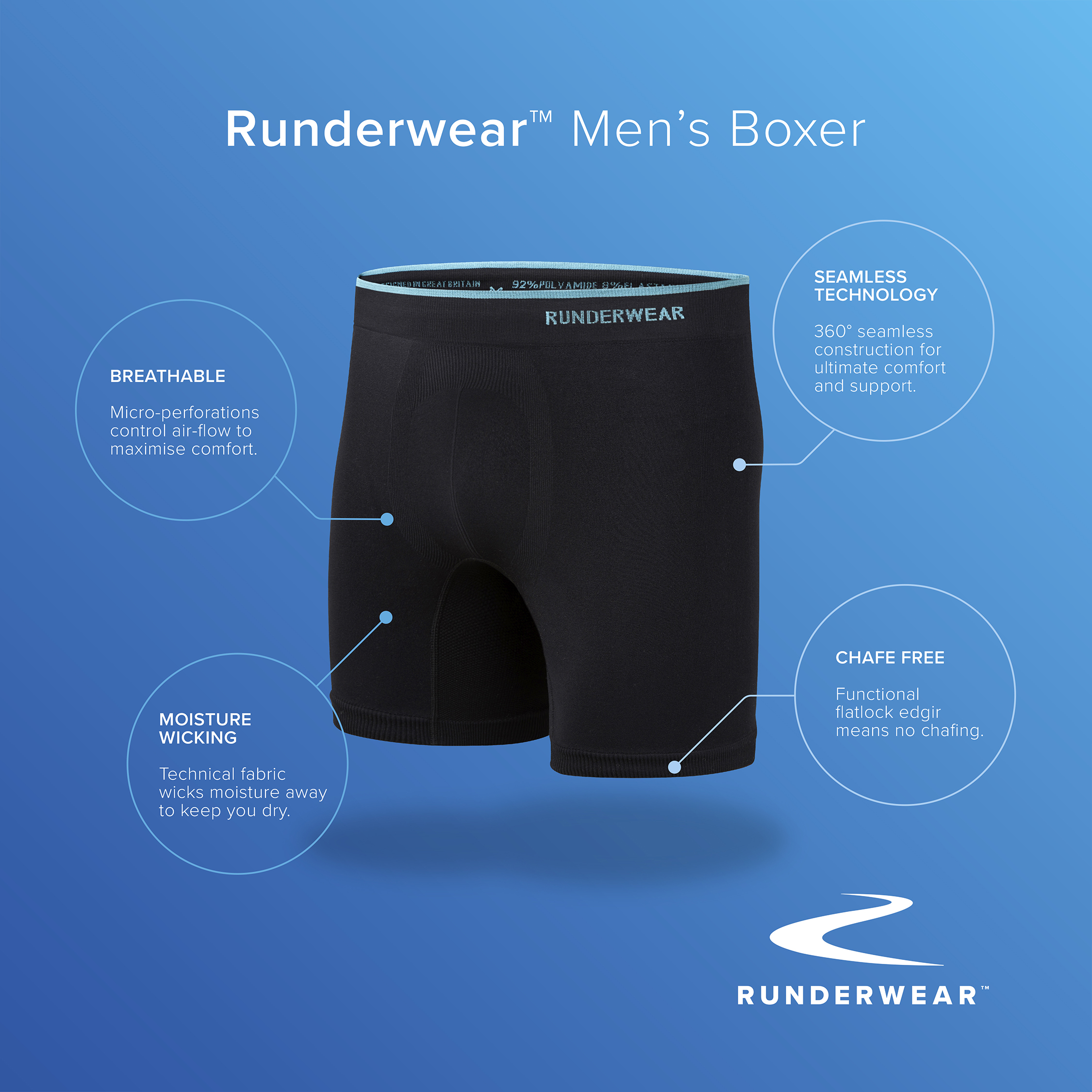 The Doubts: Putting this claim to the test in the harshest climatic conditions possible seemed like a good idea after a couple of beers the night before – but I was now pondering the wisdom of this experiment. Since I received the product for free I wouldn’t be getting any money back if they didn’t work – but it would mean that I’d be spending the rest of the weekend walking around like John Wayne. 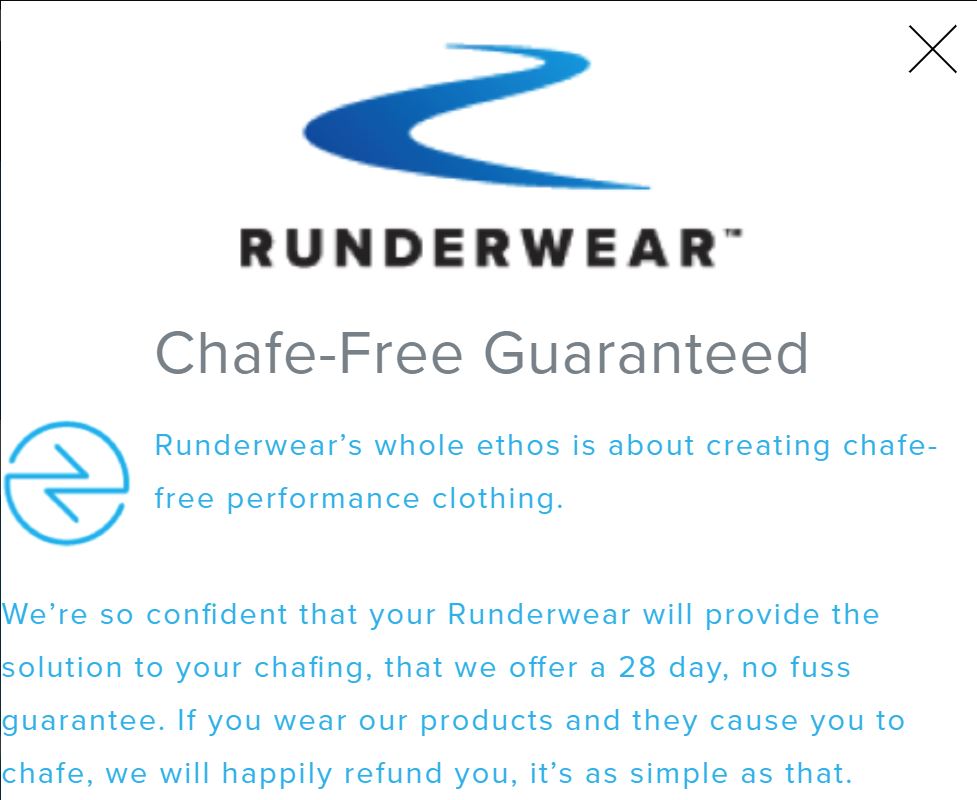 The Perspective: A quick glance at the photos below will highlight that I have fairly hairy arms and fairly hairy legs – and I can assure you that there is a consistent thread count in-between (but you’ll have to take my word for that one).

The Metaphor: Now if you can imagine exquisite porcelain being scrubbed vigorously by a steel wool pot-scourer for the better part of four-hours, that is exactly what I would be subjecting my back seat to.

The Montage: The John Nugent Marathon in the middle of the Kalahari Desert provides some beautiful running dessert with much of the route run along banks of the Orange River (full race report to follow).

[Just over four hours later, The Running Mann returns to his room. He appears to be walking normally.]

The Feedback: Marathon #208 completed, my first without Vaseline. There were a few itches along the way but nothing I couldn’t scratch. Runderwear provided great support over the entire run.

The Shower Scene: The final test would be the post-race shower. I had worked up a good sweat during the marathon and my back was caked in a fine layer of salt. What happens next is that the shower water rushes down the flat landscape of my back dispersing the salty sediment, this in turn coagulates (forming a congealed saline solution) that briefly congregates at waist level before cascading through chutney channel. If there is any rawness there, it will hurt like a bastard. Think of Hitchcock’s shower scene in Psycho – lots of pain, anguish and screaming.

The Good News: A comfortable shower was had and no one phoned reception to complain that someone was being murdered in room 114. Not quite erotica but as good as it gets for a sweaty 40-year old marathon runner with plasters on his nipples.

The Verdict: Two thumbs up, I’m happy to fully endorse Runderwear – it 100% meets the promise of a comfortable and chafe-free run. The socks are also great (I might do a separate article on them) – for now it’s suffice to say I’ll be running Two Oceans and Comrades in Runderwear socks. 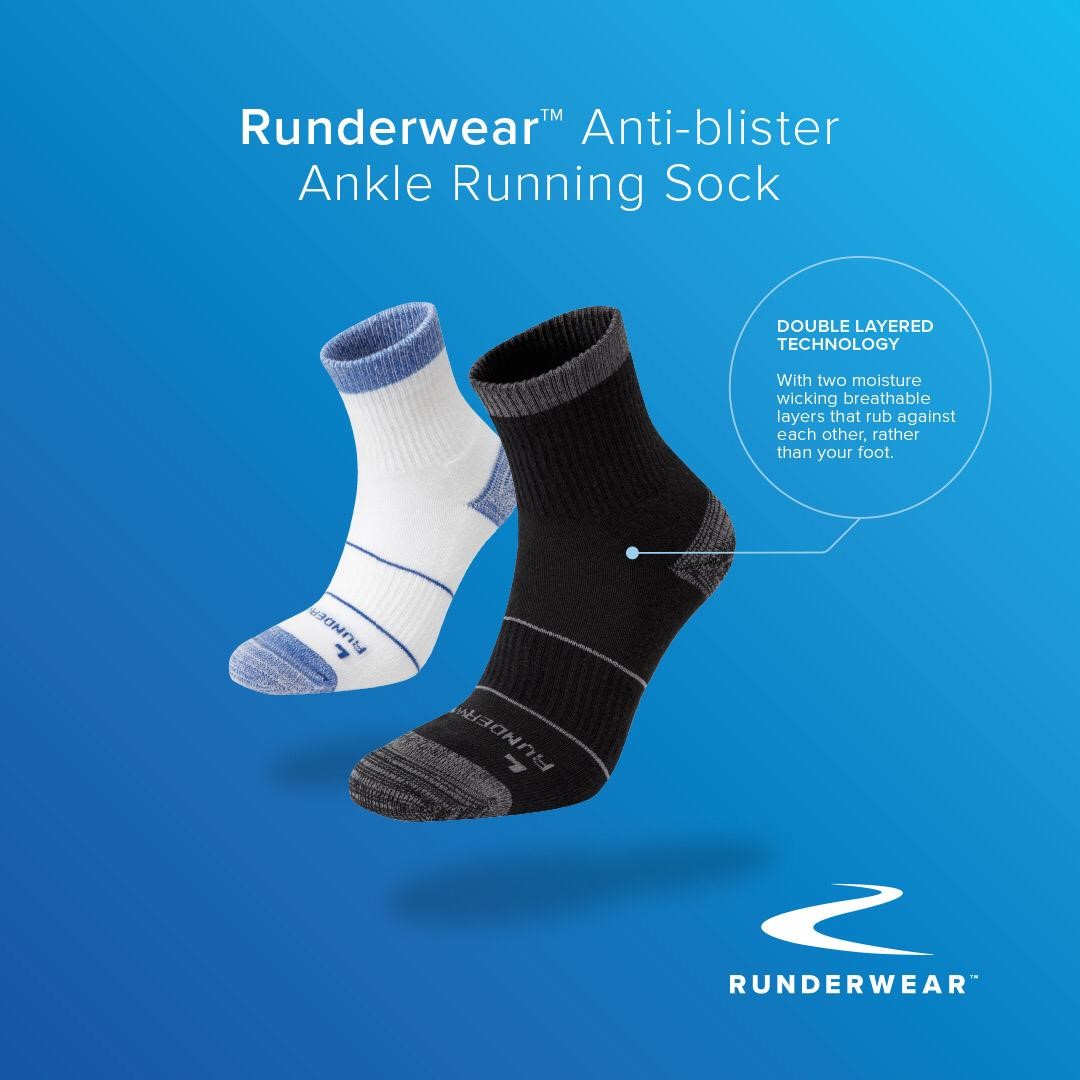 Want A Pair?: Runderwear has just launched in South Africa and you can buy a pair online at: https://www.runderwear.co.za/. They offer free shipping on all orders of R600 or more and have a 15% launch discount running until 14 April (use code  “LAUNCHSA15”).

#DontRunCommando: The Running Mann will be wearing Runderwear from now on – and will be telling some of the other Menn (like Super, Bat and Aqua) about the product so that they can start wearing their underpants on the inside.

Speaking of superheroes, Comrades champ Ann Ashworth (she even has the same first letter name/surname thing going on) has also been test driving Runderwear. On the same weekend that I ran in Upington, she did her own field test at the Buffs Marathon in East London. She faced completely different race conditions as it poured down with rain the whole way (but that didn’t stop her from smashing the course record with a superb 2h43).

Ann writes an excellent (and highly recommended) blog. In her post entitled “Let’s talk about chafe, baby?”, she reported back that, “the ladies anti-VPL (no visible panty line) hipster are a clear winner. My underwear was the one thing that did not chafe this past weekend. Man, I wish I’d worn the crop top*!”. As for her comment on the post-race shower for the body parts not protected by Runderwear, “YOOOWWHEEEE!”

* Unfortunately, Runderwear did not supply me with a crop top or sports bra to test so I will continue to use Frozen and Stars Wars plasters from the family medicine chest to protect my nipples.

This is an unpaid product review. I am happy to provide honest and authentic reviews of running related gear. Should commercial gain be derived from the reviews, my ask is for an appropriate donation of gear or funds to South African running development programs is made.