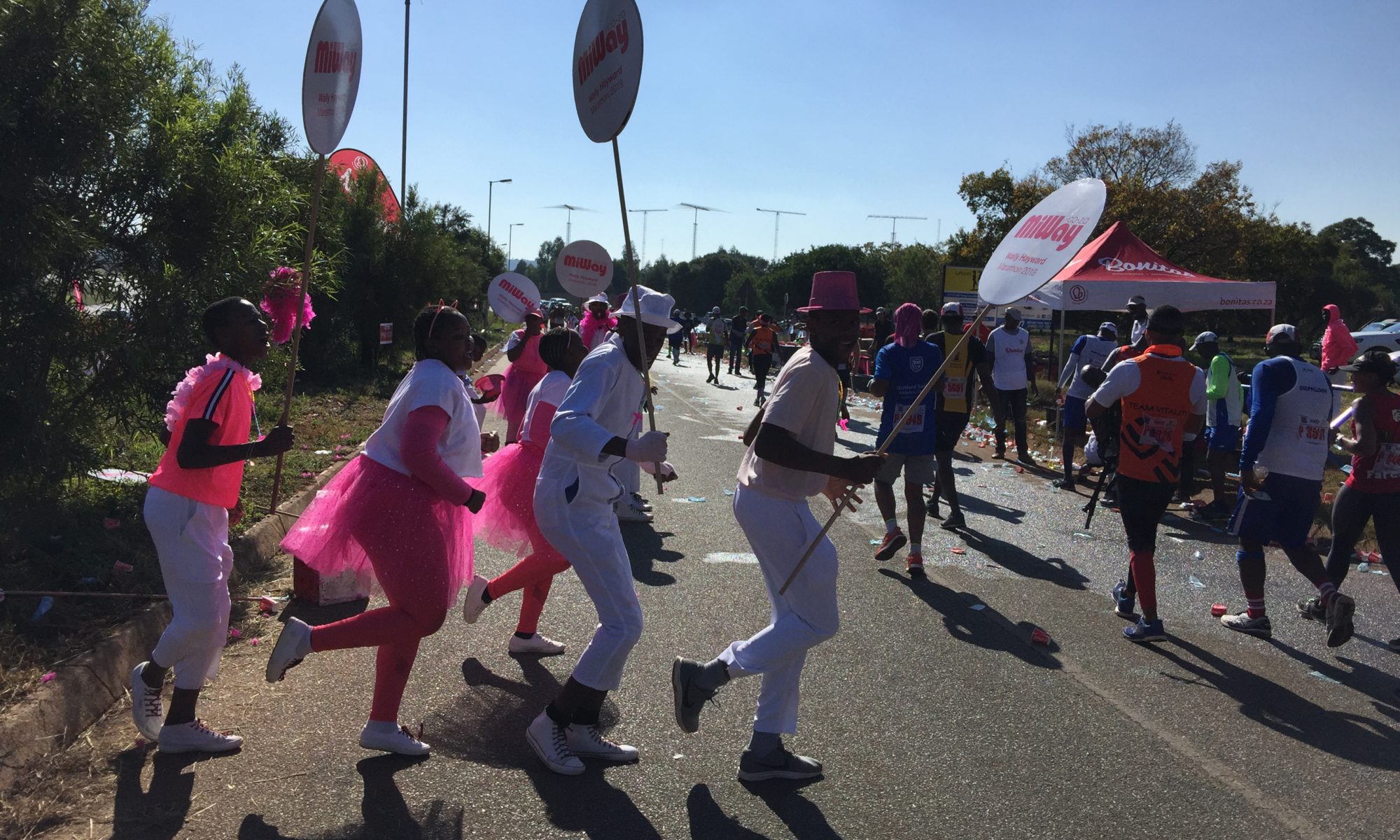 As a schoolboy, I remember hearing about the predictions of Nostradamus and thinking “What a load of crap”. How could a 16th century French whack job predict events 500 years later? I was certain that this was a complete load of concocted claptrap courtesy of the fanciful, furtive imaginations of rapscallions* who’d taken great liberties translating Michel de Nostredame’s vague, flowery prose and then used them to retrospectively correlate his prophesies to current events**.

* I’ve always wanted to use that word.

** That great bastion of truth and popular opinion, Wikipedia, supports my views on the prophesies of Nostradamus.

It’s not often that I change my opinion, but something occurred recently that made me rethink my worldview. It happened on the streets of Centurion during the Wally Hayward Marathon. Since the race is sponsored by MiWay, I thought I’d make some references to Frank Sinatra’s most famous song, “My Way”, in the race report. What I uncovered was truly sinister and disturbing – perhaps the recipe for a future Stranger Things plot line: Originally published in 1969, the lyrics of “My Way” the song were clearly written about the “MiWay” the marathon (first run in 1977) – and about my 2019 race in particular.

Don’t believe me? Read on!

The “My Way” Prophesy

‘And now, the end is near
And so I face the final curtain
My friend, I’ll say it clear
I’ll state my case, of which I’m certain’

This is an obvious reference to the MiWay Wally Hayward Marathon being the last qualifying marathon before Comrades. If you’ve left it late (or rely on the pacing busses who came home in 4:52 – two minutes too slow for Comrades qualification) the curtain will come crashing down on your Comrades dreams.

‘I’ve lived a life that’s full
I’ve traveled each and every highway
And more, much more than this
I did it my way’

The first line of this verse is some subtle running snobbery – apologies to the 3,843 half marathoners and 2,664 10k runners but “lived a life that’s full” shrewdly condescends the shorter distances by highlighting that running a “full marathon” is where it’s at. You don’t get up a four o’clock in the morning to mess around with short distances and “live a life that’s half full”.

Travelling “each and every highway” is one of the many magnificent double-entendres that are masterfully worked into the melody: To get to the Wally Hayward Marathon you need to travel along the longest highway in South Africa (the N1, that stretches from Cape Town in the extreme south to Musina in the extreme north of the country) and you also run on and over several Centurion highways during the course of the race including the N14 and numerous metropolitan highways.

‘Regrets, I’ve had a few
But then again, too few to mention
I did what I had to do
And saw it through without exemption’

This is a truly profound verse that uses incredible tact and dexterity to deal with the uncomfortable dilemma of the pre-race poo . When it comes to “regrets”, do you sacrifice several minutes standing in the queue or do you hit the road carrying unwanted baggage? Early on in my running career when faced with the choice of shitting in my pants or walking (for the record, I always chose walking), I quickly learned that one minute in the poo queue is worth ten on the road.

The second half of the verse accurately predicted my late start in 2019. It doesn’t matter what time I wake up or how many times “I did what I had to do” at home, I always arrive at the start of a race having done “what I had to do” one time “too few to mention”. This resulted in me starting this year’s race several minutes late – but I was very happy that I took the time for a final core body workout and “saw it through without exemption” (before proudly evacuating the throne room and starting the race).

‘I planned each charted course
Each careful step along the byway
And more, much more than this
I did it my way’

This section is referring to the marshalling (which was energetic) and route measurement (which was precise) ensuring that “each careful step along the byway” was one step closer to the finish line on the Centurion Rugby Club fields.

I always try to greet the marshals and enjoyed a few interactions along the way. I expect that the marshals at the half/full split have heard it all. The guy in the photo below guy was bellowing “21 straight, 42 left” and I managed to flummox him with a “What if I’m straight and running the 42?” I expect he’ll have his retort ready for me next year!

‘Yes, there were times, I’m sure you knew
When I bit off more than I could chew’

Here the songwriters are drawing our attention to the immaculate support tables that bring out sustenance on the second lap. As you can see from the photo below there are buckets of biscuits, oranges and jelly beans – definitely “more than I could chew” on during one visit.

‘But through it all, when there was doubt
I ate it up and spit it out
I faced it all and I stood tall
And did it my way’

This refers to indigestion and regurgitation of bile when you are forced to consume something that is largely unpleasant, completely unpalatable and utterly distasteful. If there is one group of people who, regardless of their orientation, cause me massive indigestion – it’s politicians. The race was held exactly one week before General Elections and every lamppost was inundated with political placards. We were forced to “eat it up” but I steadfastly “spit it out”, was unwavering against this barrage or propaganda and “stood tall” (neither leaning to the left or the right the whole way).

Whilst politicians rarely miss dirty tricks, they are seldom known for introducing novel ideas or clever innovations. Our political parties definitely missed a campaign trick by not customising election posters along marathon routes*. However the one above, emblazoned “Had Enough” resonated with me with just 2km to go (I expect these guys have had so much that they decided to braai their DSTV decoders).

* Instead of getting harassed by SMSs and cold calls ahead of elections or having to listen to a steady stream of baseless promises and outright lies, I’d prefer our advertising authorities to enforce more truthful posters. An example would be your favourite candidate’s face posted outside the toilet queue with a slogan like, “You’re not the only one who’s full of shit”.

‘I’ve loved, I’ve laughed and cried
I’ve had my fill, my share of losing
And now, as tears subside
I find it all, all so amusing’

Moving on from food to drink, the signs suggested that there’d be free beer during the Wally Hayward Marathon. However, they didn’t seem to motivate the walking runners in the picture below (whilst I motored up the hill expectantly).

I looked around in delirious delight but couldn’t spot any beer and my distraught look of disappointment was clearly visible – even through my sunglasses. Luckily Sunninghill Striders’ Duncan Boustead knew just where to look and rescued me from my distress. I “laughed and cried” as my pitiful weeping quickly turned from tears of angst to tears of joy. Duncan poured a fine Devil’s Peak draught thereby ensuring that I “had my fill”!

The prophetic songwriters were not above making a few low blows. “My share of losing” is an obvious dig that I have lost every marathon I’ve ever entered (although I did once come second). At Wally Hawyward, I let 1,850 of the 3,854 runners beat me to the finish line.

“Losing” could also refers to the mysterious South African phenomenon of hubcaps disappearing from the wheels of stationary vehicles. If you have lost a hubcap* on the undulating streets of Centurion, there’s plenty of roadside assistance (and replacement choices) as you can see from the photo below.

* I’m sure I’ve also seen some ladies wearing them as earrings at Loftus.

Here I believe things start getting outright nasty: “not in a shy way” is a blatant accusation that I am a marathon running braggert. Personally, I think I am very subtle with a low-key heading at the top of my race reports highlighting the incremental increases to my marathon count (this was number 217 in case you didn’t notice).

‘For what is man, what has he got?
If not himself, then he has naught
To say the things he truly feels’

With another clever play on words, they songwriters question what “man [read: Running Mann] has got”. So what do you get at the end of the Wally Hayward Marathon? Apart from your medal you also receive a bright pink wet face cloth to clean yourself up with (it was also put to good use giving my phone screen a good polish after another photographic excursion)!

Although the Internet (born 1 January 1983) was not invented when the song was written, the third line, “to say the things he truly feels”, accurately prophesizes the verbal diarrhoea that I now spew forth on my blog and social media profiles.

Here the song comes to a head, rounding third base before coming to its climax. These two lines are a real mouthful – I have thought long and hard about them but the connection between “kneeling” and “taking blows” is a hard one to swallow. The only explanation I have is that after Wally Hayward (on 1 May), there is a six-week period of no marathons (until Comrades on 10 June) – and that really sucks!

The final subversive verse references the fact that this is a double-lap marathon – as well as that it’s highly likely you’ll be back on the first of May next year for another tour of Centurion.

One Reply to “MiWay Wally Hayward Marathon (Can I be Frank with you?)”