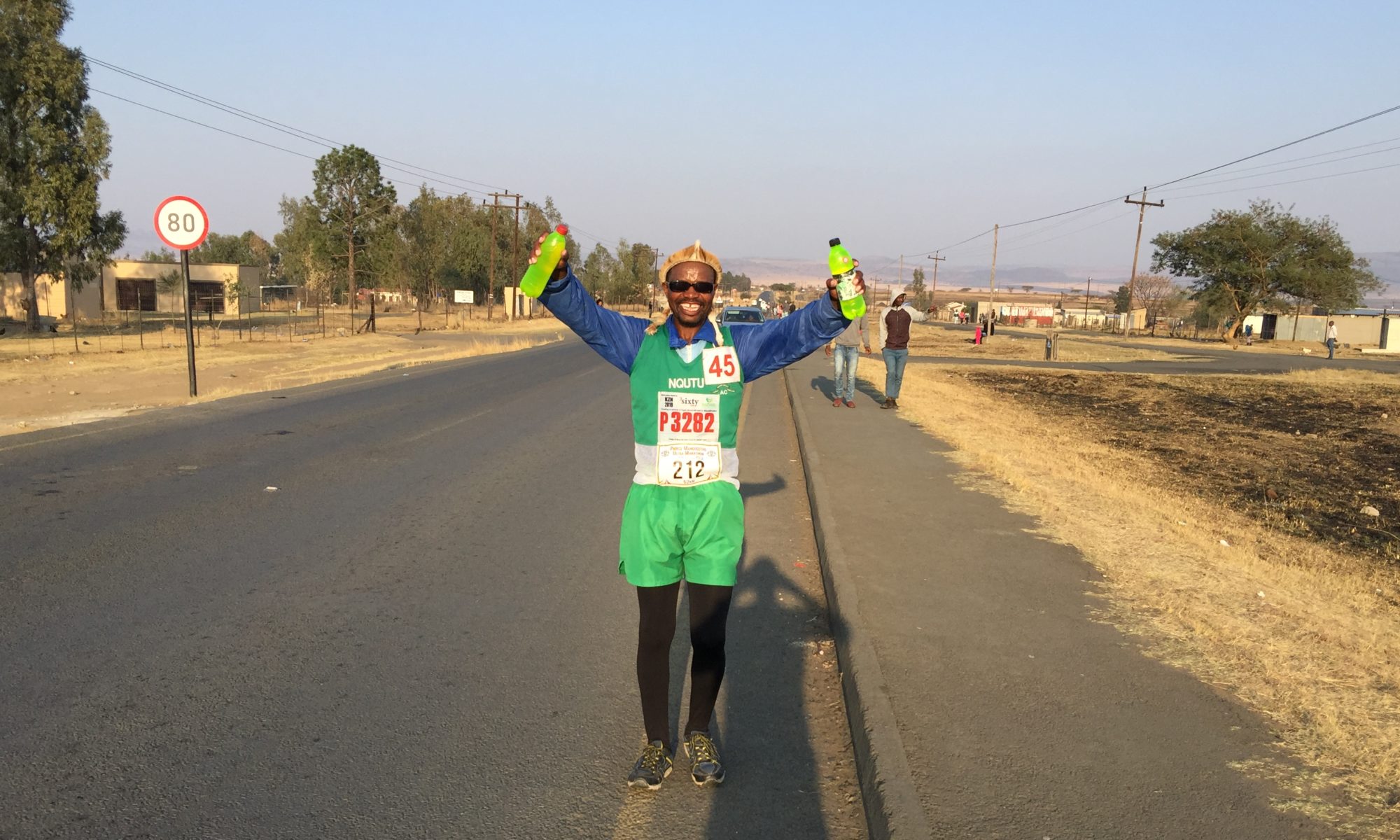 When a horse throws you off its back, we’re told to be brave, laugh it off and get back onto the horse as quickly as possible. Using this line of reasoning, I figured that if a marathon tosses you to the tar, the appropriate response is to write a detailed blog post bemoaning poor race organisation and the toughness of the route, drink a few beers and then pick another marathon to run as quickly as possible.

* I guess that the modern-day equivalent of falling off your horse is riding your bicycle in some rugby posts and then milking it for all it’s worth on social media.

Dundee’s Dorothy Nyembe Marathon tossed me off, her mountainous climbs almost broke my back and the rejection I suffered over a meagre 42 kilometres severely dented my fragile male ego. Although marathons are scarce at this time of the year, as luck would have it, the next event on the calendar presented the opportunity to return to Dundee and an attempt to tame an even larger horse: The inaugural Prince Mangosuthu 52k Ultra Marathon.

Dundee, named after the Scottish city, was originally a coal mining town and forms the nucleus of the Battlefields Tourist Route. Over 50 battles have been fought in the town and surrounding area. These include the Battle of Ncome/Blood River between the Voortrekkers and Zulus, Isandlwana and Rorke’s Drift (the later made into a movie starring Michael Caine) during the Anglo-Zulu War and many skirmishes during both Anglo-Boer Wars.

Therefore, it was highly appropriate to return to the scene of a past battle since battle re-enactments are a popular pastime in Dundee. The town’s social and cultural diary revolves around an annual calendar of battle re-enactments organised by a local group called the Dundee Diehards who get up to 5,000 spectators. You can see a video about them here:

The race finishes at the Kallis Stadium* in Dundee and your entry fee (just R130 – that’s $9/€8 for foreign readers) includes taxi transport to the start in the township of Nqutu as well as a race shirt emblazoned with the portrait of a 91-year old Zulu prince.

The race was scheduled for a 6am start which would have meant an hour of running in pitch-black conditions. Sensibly, the race referees deemed it too dangerous to run in the dark lest they lose some of the 137 starters down one of the local potholes, so we ended up starting around 7am once the rising sun provided enough natural light to run safely. Fortunately, the sub-zero temperatures experienced before the Dorothy Nyembe Marathon had disappeared but a stiff spring breeze still cut through the multiple layers of clothing I was wearing.

The athletes were raring to go but there was another delay as the local mayor delivered a lengthy speech in Zulu before we were finally sent on our way. However, we won’t begrudge the mayor his moment on the mic since the local Umzinyathi District Municipality sponsored the race and made available a very generous prize purse of R400,000* ($27,000/€25,000).

* With just over 100 finishers, I make this the richest “per runner” race in the country.

With a small field, big prize money and a genetic disadvantage*, I saw dust clouds disappearing into the distance as most of the field shot off towards Dundee. As I was leaving Nqutu, I became rather perturbed when I realised that I was being stalked by a police vehicle but put this down to small town hospitality and diligence – they just wanted to ensure that no harm came to the lonely mlungu (white dude) within their jurisdiction.

* Not for the first time this year, my friend Julian Karp and I were the only melanin-deprived athletes in the field.

The area is very dry at this time of the year – I took a quick stop to give something back to the community and water a thirsty tree. Whilst whistling in the wind, I took the opportunity to look around and, to my horror, found that the cop car was in fact on sweeping duty and I was dead last (and was rapidly getting ‘laster’ as my competition became smaller and smaller specs on the horizon).

I did manage to claw a few positions back over the next 50 kilometres.  Julian had run another 52km ultra 48 hours previously so I managed to overtake him as well and was good for the win in the First Mlungu category (unfortunately there was no prize money for this not so impressive feat but I’ll claim the title anyway).

Mangosuthu Gatsha Buthulezi is best known as the leader of the Inkatha Freedom Party which he founded in 1975 (many thought this would be a position he would cling onto for life but he recently stepped down from the role). He served on the cabinet as Minister of Home Affairs in the Government of National Unity after the first democratic elections and was acting president for a short period in 1998 when both President Mandela and Deputy President Mbeki were out of the country.

The complex and sometimes controversial life of Mangosuthu Gatsha Buthulezi is impossible to condense into a couple of paragraphs – the Wikipedia article and this article on The Rise, Fall and Retirement of Mangosuthu Buthelezi are worth reading if you have the interest and time.

A couple of items of trivia (which I find a lot more interesting than complex political analysis) are that he played the role of his own great-grandfather, King Cetshwayo kaMpande, in the film Zulu (1965) and is the Guinness World Record Holder for the longest ever legislative speech. The speech was delivered over 11 days to the KwaZulu legislative assembly in 1993. I have not searched YouTube to see whether you can watch the whole thing online.

I was also surprised to find a link between the two people with naming rights for Dundee Marathons, Mangosuthu Buthelezi and Dorothy Nyembe. Buthelezi served as state witness against Dorothy Nyembe in the 1968 trial that sent her to prison for fifteen years for her activities with uMkhonto weSizwe.

After the Dorothy Dundee debacle, I came to Nqutu well stocked and fully prepared. My pants where weighed down heavily with bags of sweets and I tucked into the supply early as I was concerned whether the elastic in my shorts would hold out for the full 52km*. However, I am pleased to report that the tables at this race did in fact have tables, enthusiastic volunteers and were fully stocked with Coke, potatoes, oranges, apples, bananas and mageu (a fermented mielie pap drink).

* A snapped elastic can lead to indecent exposure. However, if my pants did fall down halfway through the race, I would like to think I would give some decent exposure to Runderwear. They gave me some of their product to trial earlier this year and I have been running very comfortable, chafe-free runs ever since.

READ: The High Stakes Runderwear Gamble (Risking it all on the nought)

Other than the delayed start, the only other nuance with this race was the race distance markers which were spray-painted onto the road. No issue with this except that they randomised the markers between kilometres already run and kilometres to go. This nearly destroyed my soul after seeing 26 and realising I was “well over half way” – only to have number 25 appear a short while later!

If you manage to avoid missteps into the potholes, the race is run 100% on tar. The first 18 kilometres are an easy downhill that drops one from around 1,400m to below 1,100m.

This lulls one into a false sense of security until you hit the bottom of the Buffalo River Valley. From that point onward it’s hard work, with plenty of climbing as you bob up and down all the way to Dundee.

The route follows the R68 until six kilometres to go when you hit the R33 intersection and turn left to Dundee. The climb into Dundee had destroyed me three weeks previously, so I was desperately hoping to avoid this vicious stretch of road during the Prince Mangosuthu Ultra. No such luck but, after imploding like the Death Star in July, I am pleased to report that the Running Mann struck back* in August. Despite having 10 kilometres further on my legs (and a lot more glycogen in my bloodstream), it was a steady canter to the top of the rise – where I took a moment to appreciate the view (and pick up the pride I had lost at the same spot three weeks previously).

* Getting a song stuck in your head during a long race can be frustrating. I had an off-key version of The Imperial March playing in my brain for much of the race. It goes like this, ‘Dun-Dun-Dun, Dun-Dundee, Dun-Dundee’ and plays on repeat.

I enjoyed the last few kilometres on the road to redemption. My arrival to the finish line was bookended with the mayor once again on the microphone*. He is obviously something of an endurance athlete himself as he kept it going during my normal post-race rehydration rituals, photos and chats with fellow runners.

* One of my favourite metaphors for flatulence is ‘a political speech’ (as in a lot of hot air).

My Zulu vocabulary is limited to a couple of choice swear words, so I enquired as to what the mayor was waffling on about and was told it was “prize giving”. By the time I got in my car, the mayor still showed no signs of abating and there was no sign that prizes would be awarded anytime soon. I guess if you did manage to score a share of the R400k prize money, the Umzinyathi District Municipality made sure you really earned it!

For the record, the winners of the R100,000 first place prize were Mike Fokoroni and Loveness Madziva. Hopefully this race becomes a regular fixture on the calendar and they’ll be a larger bunch of athletes chasing down a win and a new course record in 2020. However, the record to watch out for next year is that of Mangosuthu Buthulezi’s longest speech. With another year’s experience behind him and the inspiration of a larger crowd in front of him, I expect there’ll be no stopping the Umzinyathi mayor at next year’s prize giving. On that note, if they do add a First Mlungu category next year, I think I’ll let Julian win it. 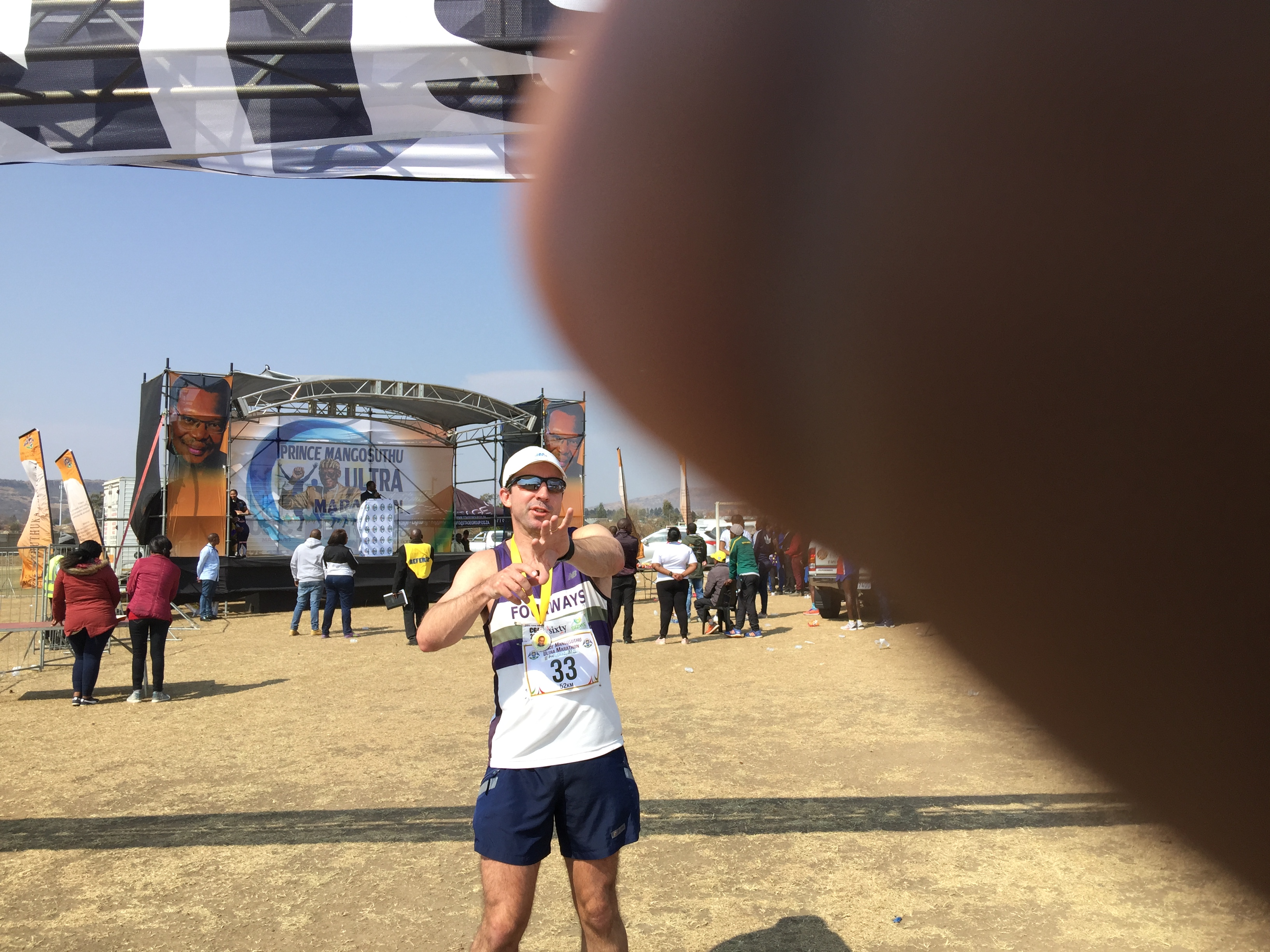 One of the common questions I get asked is, “Who takes your photos?”. I had a couple of people who assumed I ran with a professional photographer. I just ask spectators and random people at the side of the road if they’d mind taking a photo (I tend not to ask other runners unless they offer since I don’t want to disturb their race). Some of the ad hoc photographers have more talent than others (so many photos never make the cut).

One thing I have learned to look out for is the ‘finger over the lens’ error. As you can see from the photo above, this is my version of auto-correct – but I thought it made quite an interesting photo in itself so I’ve include it here.