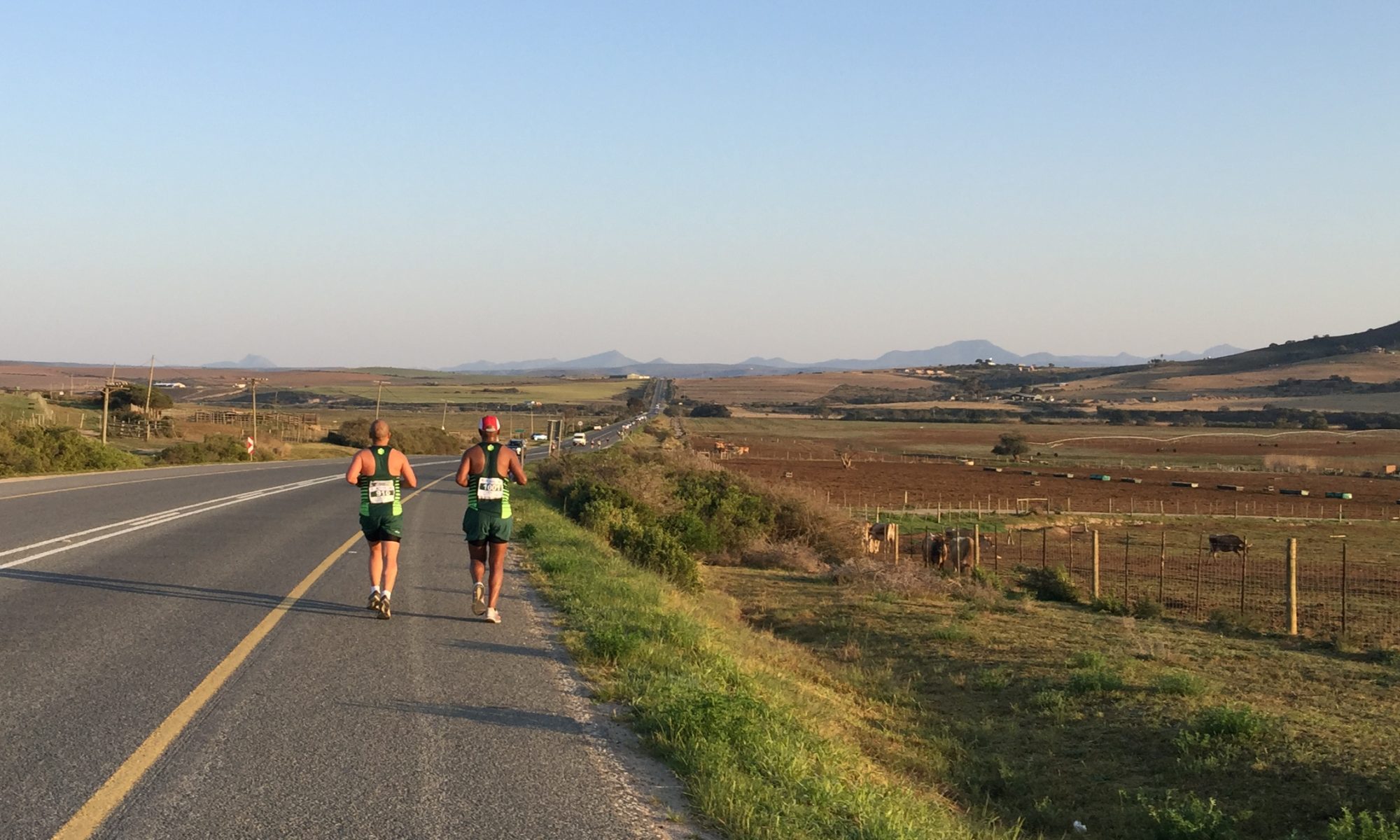 For a change, I thought I’d start with the finish. The picture below was my first impression of the race (and Mossel Bay) after parking my rental car and taking my first few steps in the only town on the Garden Route I’d never visited before.

Whilst other marathons on the Garden Route conjure up images of cavorting along pristine lagoons, frolicking over unspoilt beaches and traversing through lush indigenous forests; the PetroSA Marathon invokes images of oil refineries, smog and the smell of rotten fish.

My bad. You shouldn’t judge a book by its cover or a marathon by its name.

In my defence, “PetroSA Marathon” is probably the most uninspiring name of any race on the calendar. Whilst races with Knysna or Outeniqua in the title have inspired many a runner to check the George flight schedule, PetroSA has done nothing for the airline industry.

The race is named after the title sponsor, The Petroleum, Oil and Gas Corporation of South Africa who produce synthetic petrochemical products. The national oil company was founded in 2002 via the merging of a number of entities – the largest and most notable of which was Mossgas. Mossgas operated the world´s first gas-to-liquid (GTL) refinery at Mossel Bay and the refinery is currently the third largest in the world. Their performance seems to be consistent with all the other State Owned Enterprises (SOEs) – while I was writing this report, PetroSA reported a R382 million rand loss.

I am often quick on the draw to enter races I’ve never run before. Unfortunately my initial reluctance meant that I missed out a free race shirt as one of the first 250 entrants . However, everyone gets a tidy goodie bag together with their race number at registration – good value for the R140 ($10/€9) entry fee.

Accommodation in town is very affordable with many establishments offering sea views at bargain prices. I secured a cabin in a refurbished train carriage – a bargain at R225 ($15/€14) per night which includes breakfast and the view below.

The race started in the dark at 6am (in previous years it was 7am but the temperature can get well into the 30s by mid-morning so an earlier start was welcomed). The local runners are early risers and were full of energy at the start with a large group of enthusiastic runners singing and dancing (see video clip below).

There was a large travelling contingent from the elite Murray & Roberts Running Club. I’m not sure whether they forgot their dancing shoes or were worried about pulling a hammy before warming up properly but I noticed that they kept cautiously to one side during the frenzied dance routines.

The marathon starts off with a six-kilometre loop through the town to make use of the street lamps before dawn. The highlight (pun intended) of this section is the Cape St Blaize Lighthouse that guided us around the eastern extremities of Mossel Bay before we headed back to the start to complete the loop. The rest of the route is out-and-back.

My sedate pacing was perfectly timed to enjoy the sun rising over the Indian Ocean as we hit the only north facing beachfront in southern Africa before continuing past Dias Strand and continuing along the coastal road to the neighbouring town of Hartenbos.

If you weren’t properly warmed up yet, there was a table of sherry-sherry ladies offering an early morning OBs tipple. I declined (as I try to avoid alcohol before the sun has fully risen*) but asked if they would keep one available when I returned a couple of hours later.

* Sailors used to wait for the sun to pass the horizontal ‘yardarm’ on their ships before being issued with their first shot of rum for the day. Similarly, I need to get enough yards on my legs before my arm can be twisted into a shot (of whatever is offered).

After Hartenbos one turns left onto the R328 and there is a short but very nasty climb over the N2 highway. The climb provides a beautiful view of the Hartenbos River winding its way toward the ocean. However, I was distracted as Maserame Matlagolo stormed past me to provide irrefutable proof that something to do with Parliament does indeed run well (he did make it clear that he’s a staffer, not a politician).

The traditional route hooks a right shortly after the N2 bridge which takes one along the R102 to the turnaround point on the beachfront at Little Brak River (apparently there is one monster hill on the way). Unfortunately, roadworks meant an alternate route has been used the past two years and we continued straight on the R328 to Oudtshoorn.

However, the road to Oudtshoorn is still a very scenic second-best option with aloe-lined roads, a rich vista of farmlands and the Outeniqua Mountains (a safe distance away) completing the canvas. The alternate route also provides the opportunity to transcend biospheres as the green coastal farmlands slowly give way to the more arid conditions one associates with the Little Karoo. 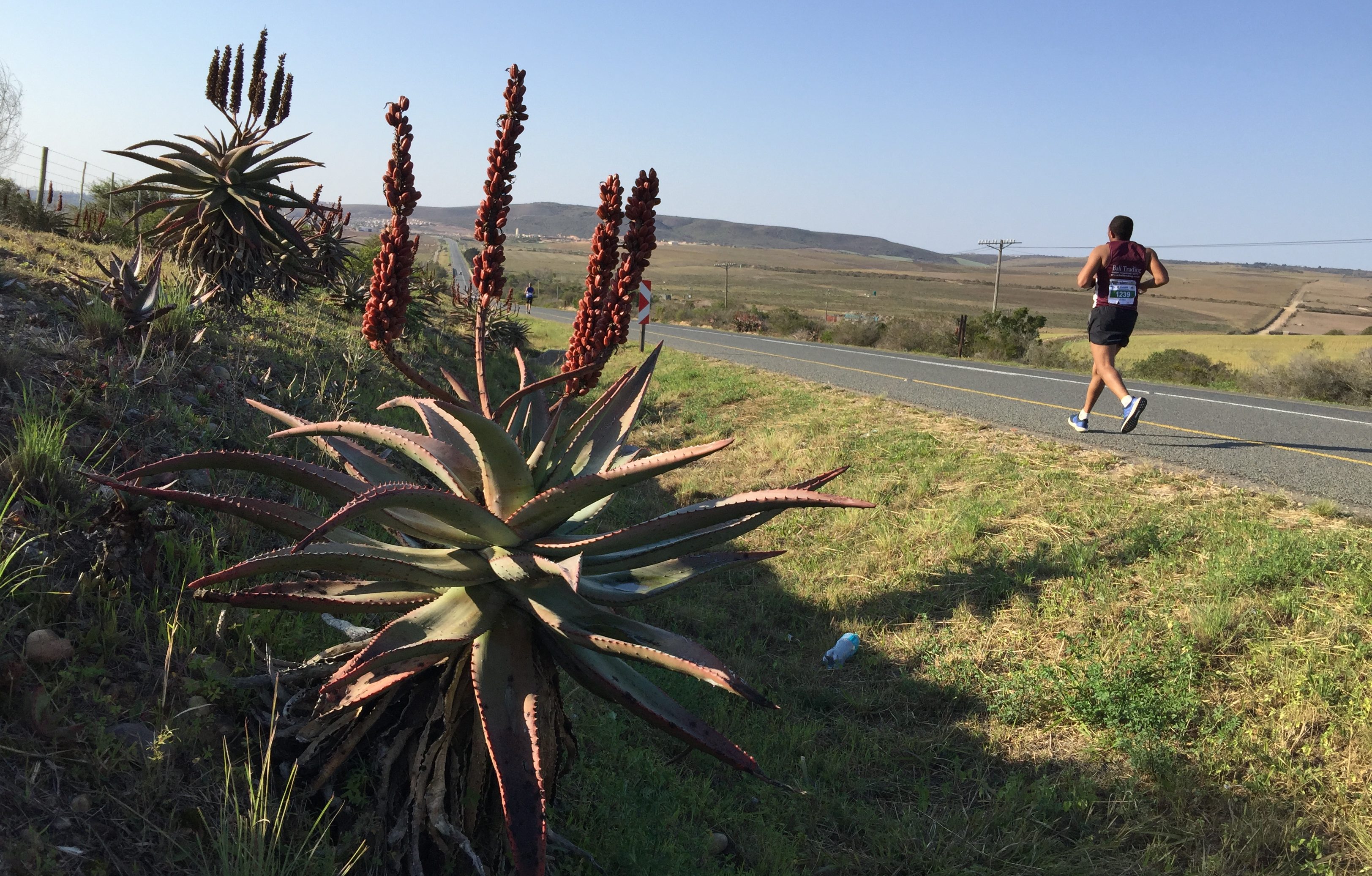 The turnaround point is just before the 25km mark. Since we were on the road to Oudtshoorn, I complained bitterly to the marshal on duty that he was making us turn too soon since “I’d come all the way from Joburg and still hadn’t seen an Ostrich yet!” He promised to organise some on the way home and duly delivered as a large flock of ostriches* (who must have been roosting on the way out) curiously watched the runners make their way back to Mossel Bay.

* The rather unimaginative collective noun for ostriches is flock, herd or pride. I would have gone with a wealth of ostriches.

By the time I made it back to Hartenbos, the sun was well above the yardarm (and I had more than enough yards on my legs) and gratefully grabbed the sherry that was waiting for me at the Oosthuizen Marais & Pretorius inc. table (it went down particularly well with a jellybean chaser).

Mossel means “Mussel” (the shellfish as opposed to the soft tissue used to produce force and motion in most animals). I have been working hard to try and think of an equivalent to Jean Claude van Damme’s nickname of the “Muscles from Brussels” but the best I could come up with is the “Fossil from Mossel” (this could be a great prize category for the oldest person to finish the marathon).

In actual fact, fossils feature prominently in Mossel Bay’s past and present. Not only is Mossel Bay a popular place to retire, paleoanthropology suggests that all human life evolved from this region. The most popular theory amongst real scientists is that today’s humans evolved from a core population of about 600 individuals and the Mossel Bay Archaeology Project (MAP) has shown that this section of the Southern Cape Coast is the most likely origin.

Mossel Bay hosts two of the most important archaeological sites in the world at the caves at Pinnacle Point and Cape St Blaize. Intricate stone blades and tools uncovered at the sites proved that major developments in the mental capacity of homo sapiens emerged as far back as 160,000 years ago in Africa rather than 50,000 years ago in Europe as was conventionally believed*.

* Based on what I’ve seen on television and social media, it seems that a massive regression in mental capacity has happened recently in certain parts of the world.

Continuing in this appreciation of ancient artefacts, the town seems to look after her senior citizens rather well. Having eaten my fill at the Oosthuizen Marais & Pretorius inc. table (you shouldn’t drink on an empty stomach), I was not tempted to stick some “60” badges on my vest to try and score a pensioner’s breakfast for just R25 (that’s a meagre $1.72 at today’s exchange rate) on the way back into town.

I also noted on the other side of the sign boards that, whilst Mossgas (and the price of petrol in general) in incredibly expensive, Mosscow is very cheap.

Although the town is famous for its natural gas reserves, it was the athletes who showed off their natural talent (and gas) on race morning. This race must have the highest proportion of sub-three finishers in the country: 47 of the 177 finishers runners (including seven women) finished under three hours (which is about 27% of the field).

The route is reasonably flat by South African standards (353m of total climbing) with only one real hill that you hit at 18km on the way out and 26km on the way back. However, there are some shorter steady climbs towards the end of the race that allows an excuse for a quick walk while one admires the beauty of the Indian Ocean lapping Dias Strand.

As highlighted in the first sentence of this report, the finish line of the PetroSA Marathon is spectacular.  I can’t think of a more scenic conclusion to a marathon in the country – I bounded down those stunning last few hundred metres enjoying the magnificent view of the Indian Ocean. In surroundings like that, I was in no rush for the race to end and stopped for a quick chat with my mate Jonathan Kaplan* before crossing the finish line and collecting a medal.

* Although he’s been sticking to refereeing schoolboy rugby and running half marathons recently, he would come out of ‘retirement’ to run his 123rd marathon at the Tony Viljoen Masters the following weekend.

This was my 222nd or (for those that follow cricket) the double-nelson marathon. I should probably have made sure that finished with both feet off the ground but made up for this lapse in concentration by relaxing with both feet in the air whilst enjoying a couple of beers in the lounge before flying home.

August is one of the best times of year to run in South Africa – and the PetroSA Marathon is one of the best August marathons on offer. This is a race I’ll definitely return to run again – especially since I still need to conduct a first-hand examination of the traditional route to Little Brak River.

One Reply to “PetroSA Marathon (Fossil fuel in Mossel Bay)”