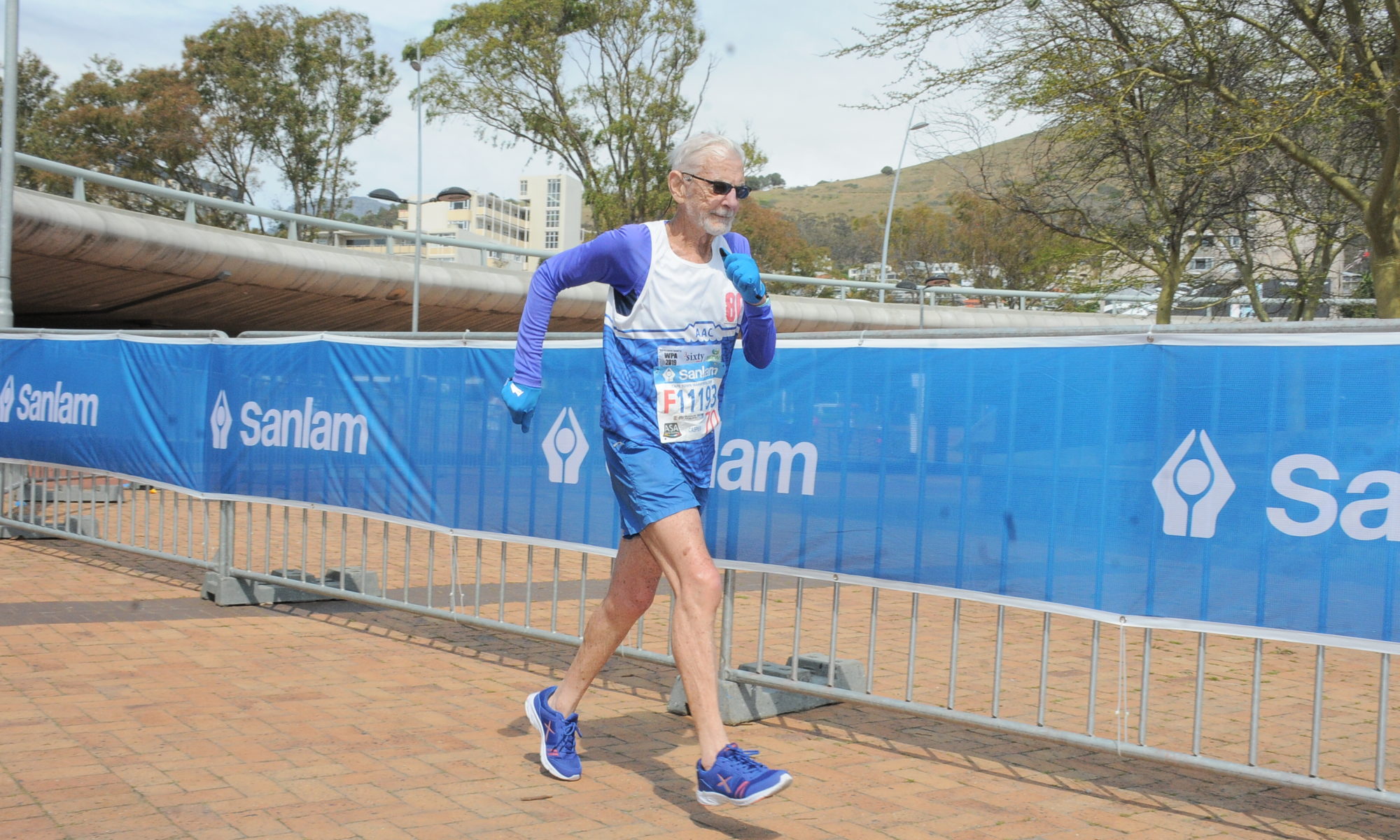 The Tony Viljoen Masters Marathon in East London was started in the late 1970s as a way to encourage athletes to continue participating in athletics events after they’d “past their prime”. In East London, “past your prime” is considered “over 35” – and the inaugural race in 1978 had a strict “no under-35s” restriction.

Four decades later and the rules have been relaxed to allow youngsters to run the race socially. However, this is a marathon that specifically caters to the older generation and prizes are only awarded for those born before 1984. These are awarded in five-year brackets from 35-39 all the way through to the oldest finisher.

This year it stopped at 75-79 in the ladies’ section of the race with the 75-year-old Paula Richardson finishing in 5:20. In the men’s field, the incredible 84-year-old Caspar Greeff pushed the finish categories all the way to the 80-84 division with a 5:30 finish. In doing so he became the oldest ever finisher of the race and probably set the record as the oldest South African to complete a marathon*.

* I’ve checked with those in the know and no one could identify any older marathon finishers in South Africa. Riël Hauman, the demure and normally sedate statistician, added “Caspar is a freak!”

If Caspar did set the oldest South African marathoner record at Tony Viljoen Masters, it was a very short-lived mark. Two weeks later he lined up at the start of Cape Town Marathon and cruised to another comfortable finish. On both marathons his daughter Michele took on guardian angel duties, ensuring her sprightly dad finished in good health. Michele has a vested interest in ensuring that her dad keeps in peak condition – father and daughter have a date in November when they plan to run Die Vlakte Marathon from Heidelberg to Witsand together.

Caspar Greeff is a living legend on the South African running scene. He was a founding member of Rand Athletic Club (RAC) and ran his first Comrades at the age of 34, ending up with 38 finishes (concluding with a 10:13:57 on the 2011 ‘Up’ run as a 74-year-old). He’s also the only person to have run a silver Comrades in his 30s, 40s, 50s and 60s. Had he not delayed his running career until his mid-30s, not doubt he would have boasted a five-decade history of Comrades silvers.

Likewise, Caspar also has (note the present tense) a distinguished Two Oceans career which started with a silver medal (3:57:58) in 1976, includes 28 ultra finishes, category wins in the masters (over 50), grandmasters (over 60) and great grandmasters (over 70 – his best time here was 4:58:44). He is now steadily clocking up half marathon finishes and is halfway to a permanent Blue Number at the Two Oceans half marathon. For the last few years he has been, by some way, the oldest competitor in any of the various Two Oceans events.

Caspar is unique amongst octogenarian athletes, most of them start running very late in life and therefore have the benefit of running on “fresh legs”. Caspar has been running marathons for fifty years.

He’s a professor of actuarial science and, as director and chairman of the Independent Actuaries and Consultants company, still works mornings to provide advice to the other actuarial staff. By all accounts the desk next to him is in hot demand from colleagues hoping to gain intellectual and athletic osmosis.

However, despite having a head for numbers, he’s lost count of the total number of marathons he’s completed but “can remember finishing at least 146 ultras”. And not just any old Mickey Mouse ultras either. Apart from his 38 Comrades finishes, he ran 11 Karoo 80km Ultras, a handful of 100 milers (with a best time of 14h28m when he finished second at Washie), several 100km races (his last was as a 70-year-old) and two London-to-Brightons.

Perhaps the most memorable of all his ultras was run in Beaufort West when he arrived in the small Karoo town without his running shoes. Whilst most would have begrudgingly resigned themselves to spectator duties, for Caspar it was a simple choice between running barefoot or in his work shoes. Don’t tell the hipsters, but Caspar’s Hush Puppies got him around the Beaufort West Ultra in about the same time he had run it the previous year in traditional running attire.

The temptation in an article like this would be to use the clichéd phrase, “He shows no signs of slowing down.” Caspar readily admits he has slowed down significantly as the years catch up with him. At 81 he was still completing races at an average pace of under six minutes per kilometre but says “Now I am 84 and much slower.” Speed is of course relative and there are plenty of reports on social media of a friendly Caspar ghosting past runners less than half his age.

Caspar Greeff is an athlete without peer. A true gentleman both on the road and off. However, there is some good news for any up-and-coming 79-year-old runners looking for a category win at next year’s Tony Viljoen Masters: Caspar is moving up a division on 13 February and will be fighting it out, almost certainly alone, in the 85-89 category thereby freeing up line honour glory in the younger categories.

Caspar Greeff has achieved more on the roads and trails than most of us could ever hope for. However, his greatest achievement may well be as a dad. I just received this from email from one his daughters, “Stuart, what a lovely article. The only thing you omitted is that he is the best Dad ever. Karen”.

I’ve also noted the unbridled love, respect and esteem with which Michele and Karen hold their dad in comments they’ve made online. When I’m 84 I doubt I’ll still be running marathons but, if my two daughters hold me in the same esteem as Caspar’s daughters do, then I know I’ve won at life.