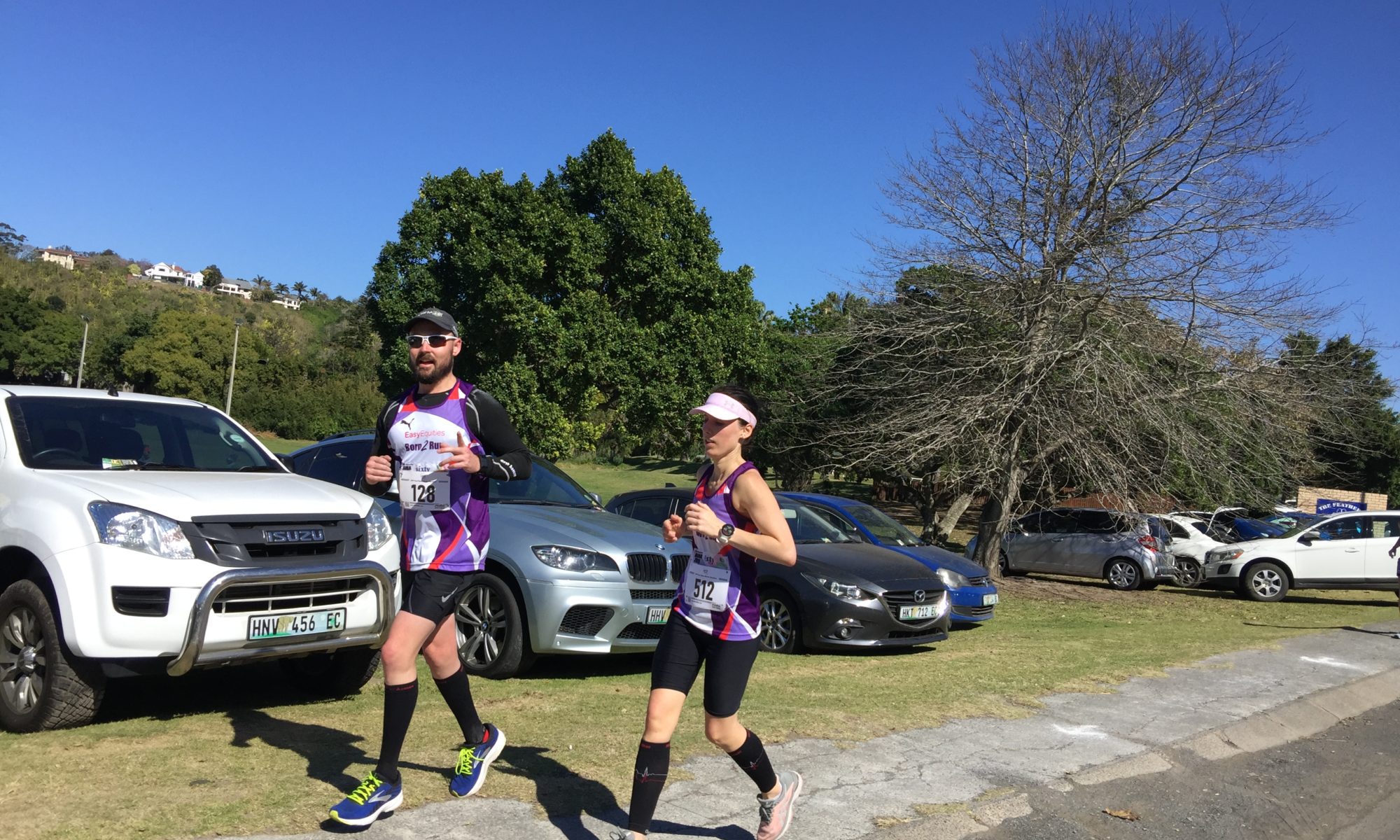 Out-of-town point-to-point races usually require some transport logistics. Luckily, whenever I make a trip to East London for a marathon, I know that I can always rely on Jeremy “School of Hard” Knox for assistance. At the recent Tony Viljoen Masters Marathon, Jeremy (who’s a regular guest star on this blog), secured me a lift with one of his Born2Run club mates, Ryan Guest. Ryan is an inspirational runner who , as his surname suggests, deserves his own guest star role on this blog.

On the drive to the start, Jeremy mentioned something about Ryan “having a unique running style because of his different sized legs” – I wasn’t sure whether Jeremy was ‘pulling my leg’ until I caught up to Ryan late in the race and noticed his rather unique running style – which I would describe as being akin to a very fast zombie lurch* (but without as much grunting and gnashing of teeth**).

* If ‘The Walking Dead’ zombies could lurch as fast as Ryan, then Rick Grimes and the gang would have lasted two seasons maximum.

** Unfortunately I did not get the opportunity to observe how Ryan attacks water sachets to observe whether the zombie comparison ends with his running style.

Ryan was born with Familial Spastic Paraplegia, resulting in one of his legs being 2cm shorter than the other. Incredibly, this has not held him back and the Tony Viljoen Masters was his 34th marathon finish. He also has three Comrades and two Two Oceans Ultra Marathons to his credit (Ryan is probably the only person who enjoys the camber along Rhodes Drive).

Ryan started running at the age of 19 as he “needed an outlet from the excessive bullying that affected me from a young age.” He lists his dad as his biggest inspiration and followed in his father’s footsteps, quite literally, earning a permanent number at the Buffalo Marathon with ten consecutive finishes.

Ryan also credits his wife, Margaux, for all the support and encouragement she provides (she was looking after their sick baby whilst Ryan took the easy option, escaping a nasty bout of puerile projectile vomiting to run the marathon). He also highlights that, “None of my achievements would have been possible without the Lord my God. We have walked a long road together and he has blessed me and kept me safe on my many journeys.”

His unique running style means that he is more prone to tendinitis and bruising. Ryan also needs to wear specially built up shoes which can be expensive since he will go through at least five pairs during a Comrades year with the built-up shoe wearing down quickly under increased mileage.

Ryan insists his achievements are nothing special and that he doesn’t need any special treatment, “A lot of people looked at me with an incredible amount of sympathy, sympathy that I couldn’t quite understand, because I always saw myself as equal to anybody else in terms of my ability.”

However, there is one thing that will bring out the emotion (and provides this inspirational runner with his own inspiration): Watching and supporting his good friend Ernest de La Querra conquer this year’s Washie 100 miler, “brought tears to my eyes and filled my heart with pride.”

As for his own words of advice for runners – and those who think they can’t complete a marathon, “You have the power to turn a dream into reality, you alone can inspire others and when others ridicule you and call you names, know in your heart that you can change your stars. Self-belief, is an incredible thing!”