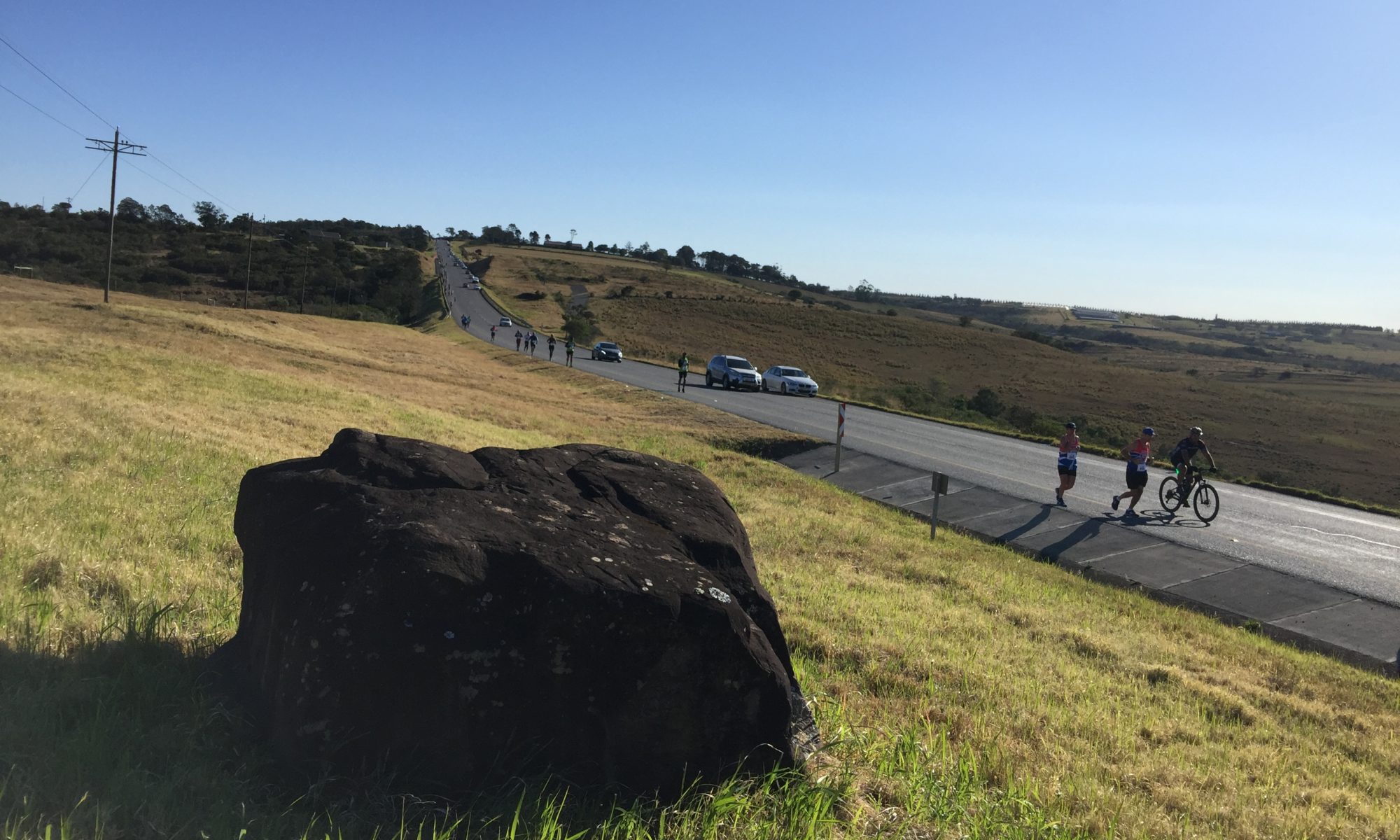 Terry Pratchett was one of most creative writers of all time. However, I doubt that even within the zaniest recesses of his wild imagination did he ever imagine that these lines from his book “Eric” (1990) would be used to describe a marathon route. But then again Terry Pratchett never visited East London. Had he done so, the Discworld would have looked rather different!

Based on Pratchett’s definition, the Tony Viljoen Masters Marathon is pure, unadulterated marathon running erotica. Nothing but feathers, tender caresses and light tickles; A gentle frolic as you tenderly work your way down from an altitude of 600m to a sea-level climax which, rather appropriately considering where I am going with this report, is at the Feathers Clubhouse of the local Beacon Bay cricket club.

A point-to-point race requires some transport logistics. Luckily, I can always rely on Jeremy “School of Hard” Knox for assistance when running in East London. Jeremy, who’s a regular guest star on this blog, secured me a lift with one of his Born2Run club mates, Ryan Guest. Ryan was originally going to feature as an aside but, as his surname suggests, I decided that he deserves his own guest star role on this blog.

The largest and most well-known standard marathon in East London is the Buffalo Marathon usually simply referred to as “Buffs” – a popular qualifying race because it is a point-to-point downhill plummet. In our pre-race comms, Jeremy described the Masters route being “like Buffs but easier – because you don’t do the hills at the end of Buffs”. Since running the Real Gijimas 50k (the toughest 50k route in the country where Jeremy told me I’d “love the easy, downhill route” but failed to disclose that the other 80% of the route is made up of hellish hills), I view Jeremy’s route descriptions with an extreme degree of scepticism but this time he was spot on. I’m happy to go on record that this is the easiest marathon course I’ve run.

We were met at the start by a stiff breeze. However, it was behind us. So, not only did we have 42 kilometres of delicious downhill to look forward to but also had a tailwind the whole way (although some people, including myself, swore that the wind changed direction towards the end of the race).

There was a record field this year of over 700 runners. I was in no rush so took my place at the back of the pack. This turned out to be a good move since I was able to meet Goodwill Stoffels, with whom I’d chatted many times on Twitter, in person for the first time. I normally start a marathon in a good mood but this was the first time I started with Goodwill.

Race organisers in this part of the world follow a no frills, no fuss, do the basics right approach. This was clearly evident by what was missing from the start and finish lines: Like the Avengers without Hulk, there is no Banner.

Step 3: Draw a line on the road and start your race there.

* In the case of the Washie 100 miler you drive a little further up the N6.

In fact, you need to keep your wits about you when running without a GPS because of the plethora of roadside graffiti denoting the kilometre markings from various races that make use of this stretch of tar that connects Queenstown to East London.

East London’s minimalist marathon management mantra means everything is kept small and simple. This includes the distance markers which are easy to miss for the inattentive runner, but their small size poses less of a tripping hazard than cat’s-eyes to the distracted athlete.

I ran the first few kilometres with Jeremy who pointed out the local landmarks. These primarily consisted of places where he’d vomited during his second Washie 100 miler in July. No one in East London cares about how many Comrades you’ve run – Washie carries all the kudos. In fact, the only downside of running a marathon in East London is that everyone asks you, “When are you going to come and run Washie?” I don’t mind talking about sex, politics or religion but 100 miler conversations are taboo.

A while later I caught up with Jonathan Kaplan. When I was a kid, I was doing something naughty behind my father’s back – safe in knowledge he couldn’t see me. However, without looking around, he still caught me doing it. When I asked how he knew what I was doing he told me, “I’ve got eyes in the back of my head.” I was young enough to believe him (for many years) but, in retrospect, he was probably just playing the odds since I was usually up to something naughty.

However, I can confirm that rugby referees have full 360-degree surround sound hearing (so beware the player who says something nasty about the ref behind his back). I had been chatting with Natasha Venter whilst quickly gaining on the running referee. However, a few metres before pulling up alongside Jonathan, he greeted me without visuals having taken in the whole conversation from 50 metres away.

I suppose at some point in this article I should tie things back to the Pratchett quote, so let’s start with the “Nothing kinky” element. The route follows the N6 for 95% of the race and there are absolutely no kinks at all until the 40km mark when you veer into the suburbs (by this stage the marathon knows you well enough to try something different).

As for feathers, this marathon is light petting, PG-rated first base action all the way. There are no quad crushing downhills – just a long, gradual, tantric drop to home base (and a very soft landing) at Feathers in Beacon Bay. There are a couple of minor uphills along the way but nothing that will leave any marks or bruises the next day. No safe words required. This is a race that treats you well, is guaranteed to leave you with a smile on your face and will respect you the next morning.

However, if you do want something a little more hardcore or just can’t contain yourself, you can “Park Your Python” along the route. The local snake park is the site of a popular parkrun and a quick detour around the course could provide some discreet extra-marathonital gratification for those who can’t keep their legs on the tarmac.

However, if you are averse to reptilian snake charms, the good news is that this race provides the opportunity to experience multiple organisms as you run past the Lion Park a short while later. It was also at this point that I noted some impressive animal magnetism, capturing this rare photo of a cheetah and a lion in the same shot.

The sweet pillow-talk continues over stunning rural Eastern Cape vistas whilst the friendly support tables, stocked with water and cola sachets, allow you to catch your breath on a precise three kilometre rhythm method. The rustic countryside is gradually replaced by urban sprawl as the Indian Ocean appears in the distance.

As you approach home base, there is no better way to consummate your relationship than in the alluring Nahoon Valley with a couple of river crossings and leafy suburb running.

I once had a friend who used to brag that after he had sex, “Even the neighbours needed a cigarette*.” Whilst it might be customary to treat yourself to some after action satisfaction, completing the easiest marathon in the country means you’ve probably only earned yourself a light beer. The organisers certainly don’t think you deserve a medal for your exploits. Once again, this is part of the low-key, no fuss, keep the costs down approach (which I have no problem with although many runners do like a medal to show-off after a conquest).

* For those worried about the dangers of smoking after sex**, don’t worry I think he was probably a virgin at the time (and to the best of my knowledge still is).

** I’ve also been told that if you do find yourself smoking after sex, you should use more lubrication.

*** If you smoke after a marathon the same would apply. However, if you are prone to extreme chafing, I would recommend Runderwear (I’m a big fan of their products and practicing safe marathon running in the photo below with their base layer top, socks and jocks).

What I do know is that when it comes to chickens, men are simple but focussed. I’ve heard some of my gender profess to being “Breast Men” whilst others proudly proclaim to be “Leg Men”. As for me, after a long session of marathon running erotica, I am unashamedly a “Wing Mann”. Therefore, I made the most of the spicy chicken wings on offer in the lounge – and, by the time my flight boarded, I’d definitely consumed more than enough calories to earn myself the reward of another marathon next weekend.

In the late 1970s, the chairman of the Border Masters Athletics Association, Tony Viljoen, was looking for a way to encourage athletes to continue participating in athletics events after they’d past their prime. His brainchild was the first Border Masters Marathon first run in 1978 with a strict age limit of “no under-35s.”

READ: Great Greeff (Two marathons a month keep the doctor away for this 84-year-old)

Just 33 runners completed the inaugural marathon but the race quickly became a popular feature on the Eastern Cape running calendar. Tony Viljoen was an accomplished runner himself (winning the 1980 edition of the race in his late 40s with a time of 2:57:28) and was the race convenor until 2017.

The Border Master Athletics Association recognised Tony Viljoen’s contribution to the sport with race naming honours in 2001. Not only does the race encourage the older generation to keep active, all proceeds from the marathon are used to assist athletes attending SA Masters and World Masters athletics events – and masters athletes in need are also considered for support as needs arise.

This was the first year that Tony missed his marathon. On August 5, exactly 41 years to the day after the first Masters Marathon, Tony Viljoen passed away.

Another great servant of Border Athletics, Bob Norris wrote the touching obituary below from the Daily Dispatch. 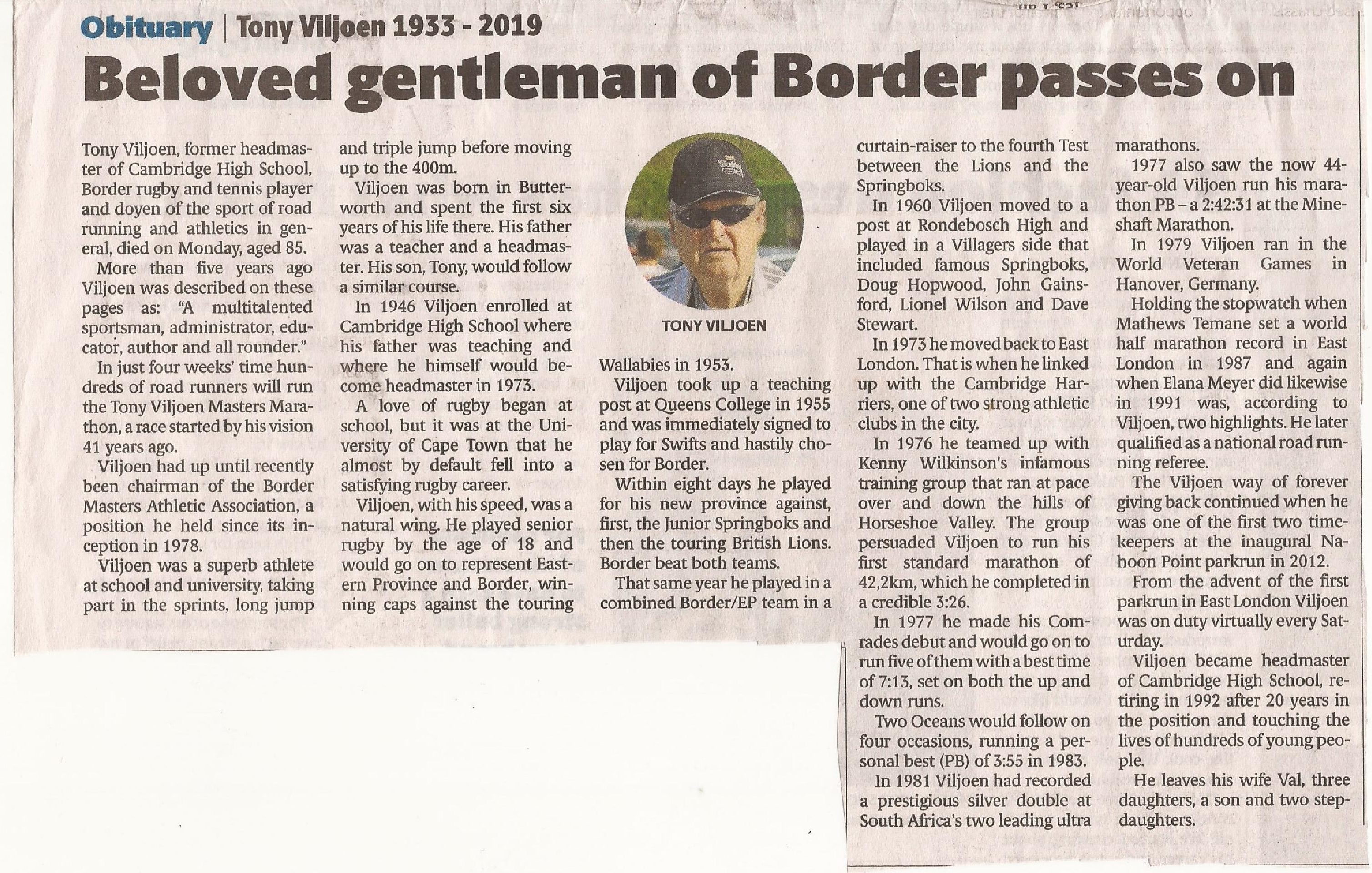