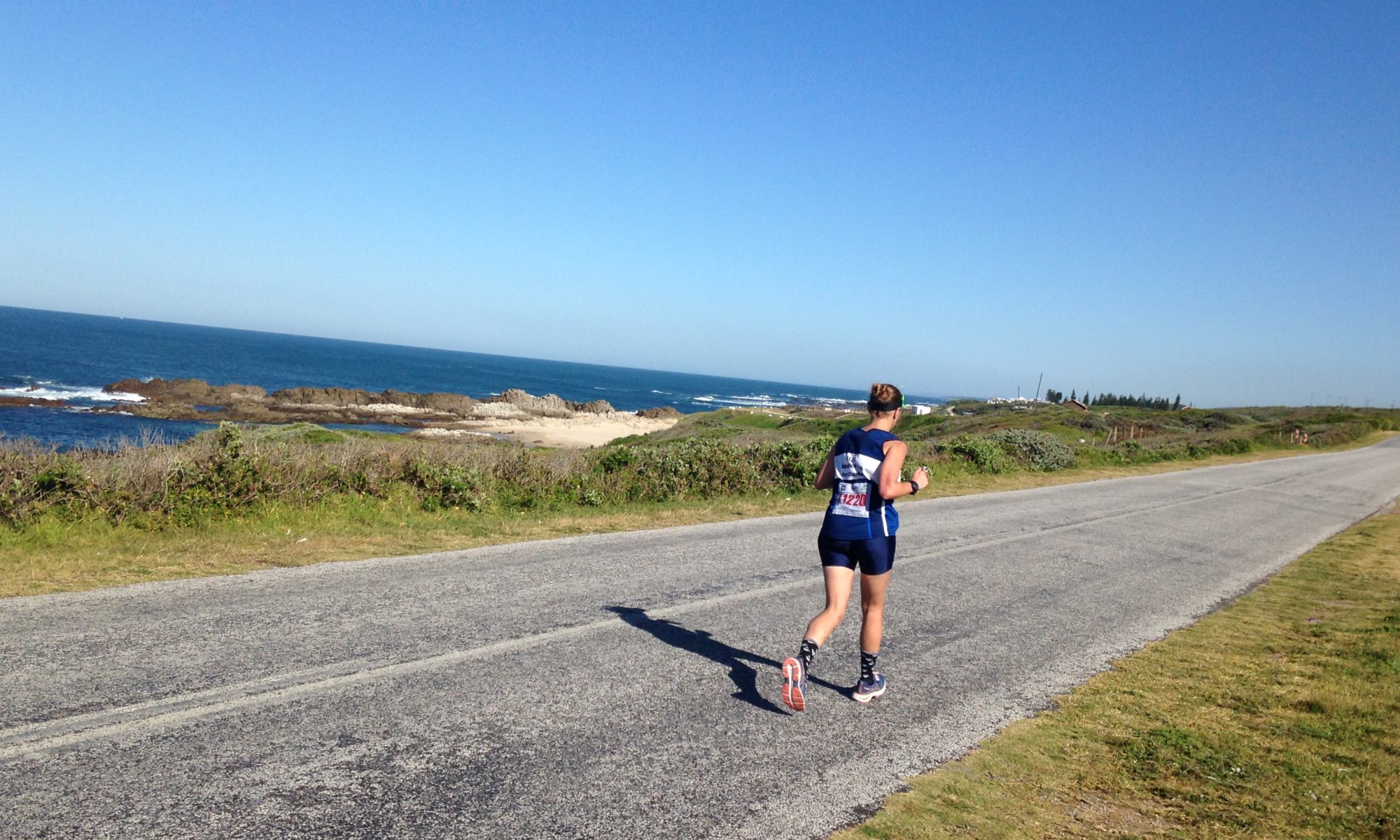 The week leading up to this marathon had been one bad news story after another in South Africa. The perfect antidote for a bad week is a visit to Port Elizabeth, otherwise known as the Friendly City – especially if you get to run the Friendly City Marathon whilst there.

On arrival Port Elizabeth quickly reminded us of her other nickname, the Windy City, and the small amount of hair that I have left got given the full Alex Ferguson-hairdryer treatment on the short walk from the plane to the airport terminal.

I’d already paid my R130 pre-entry fee and registration was a simple two-minute affair at Rafi’s Appliances and Mattresses. This was the 25th running of the marathon and Rafi, who apparently is a real character, loves having the registration in his shop so that “everyone gets to see the great products he sells.” That’s probably also why the registration is right at the back of the store on the upper level!

It pays to register early as the first 500 people to collect their numbers get a race T-shirt – emblazoned with the three sponsors Rafi’s, Builders Warehouse and Die Burger*.

* For overseas readers, Die Burger is a local Afrikaans newspaper whose name translates** as “The Citizen”. Die Burger would however make a great name for a clandestine group of vegan vigilantes or (paradoxically) a grease-pit restaurant that gets kickbacks from the local cardiology unit.

** I remember being extremely confused as a child when I saw a promotional poster indicating that Bruce Willis was starring in an Afrikaans movie. The movie was of course the greatest Christmas movie of all time, “Die Hard***”.

*** If I ever got into documentary film making, the first movie I would make would be about men who overdosed on Viagra. It would also be called “Die Hard”.

Regardless of your faith, the race provides a good reason to go to church on a Saturday as it starts and finishes at the Fountain Vineyard Church. Around 170 devout parishioners huddled together on a cool, calm (for PE locals) / blistering gale force (for everyone else) morning for our 6am spiritual awakening. For the less pious running disciples, there are slightly later starts for the half marathon (6h15) and 10k (6h30) options.

After a few undulating warm-up kilometres around Miramar and the surrounding suburbs, there is a steady drop down Schoenmakerskop to the coastline. It was all good clean fun at this stage and if you look at the route profile you’ll see why.

Unfortunately, this is a route that is a lot like starting your evening with tequila shots. Despite your best intentions to take things slowly, one tends to get caught up in the merriment and sucked along by your friends. As someone who tries to make the most of any opportunity, I figured that when life has given you a week full of lemons, you might as well kick back and enjoy the tequila downhills whilst savouring the salty sea-breeze.

Just before the eight-kilometre mark the route flattens out as you turn left into Marine Drive. I’d run this exquisite piece of coastline-hugging road during the Bay Ultra in 2018 and was looking forward to another visit. You are already well into the Bay Ultra when you hit Marine Drive so this was first time I experienced the sun rising over this section of the Indian Ocean.

READ: Bay Ultra (See the Lighthouse at the End of an Ultra)

This section of the route is characterised by seaside cottages, camping sites and holiday resorts. The original town planner obviously decided to add to the atmosphere with nautical road names – and the one that caught my eye was ‘Periwinkle Lane.’

I imagine that there are men “for whom size matters” who would have a big problem (oxymoronic pun intended) living in Periwinkle Lane. “Compensation theory” states that the size of one’s car is inversely proportionate to the periwinkle one packs. However, Periwinkle Lane is a tight fit and its narrowness precludes any potential dilemmas for the less well-endowed – if someone did try to park their Discovery, Defender or Range Rover in Periwinkle Lane it would be the first time they heard the phrase “There’s no way you’ll fit that thing in here.”

With Port Elizabeth hosting the South Africa leg of the IronMan series, both running and peddling are popular pastimes but this does mean that you have share the road with large, marauding hordes of cyclists. Whilst most of the lycra-clad brethren are perfectly harmless, there are frequent reports of dangerous encounters with feral, uncultivated cyclists and regular road signs warn you of this hazard.

I experienced first-hand the peril of pesky peddlers peeking at your periwinkle whilst piddling in PE. Whilst enjoying a quiet moment at the side of the road (and helping to alleviate drought conditions) a stealthy, menacing mob of cyclists suddenly emerged from around the bend. One of the herd, no doubt the owner of a large ostentatious automobile, blurted out, “Looks like a penis only smaller” to which the obvious retort was “You should know – being the penis inspection expert!”

Apart from the scourge of cyclists, everything else was perfect. I normally thank the support table crews – but with views like those below to enjoy on a brilliant Port Elizabeth morning, I think the helpers should be thanking the Friendly City Marathon runners for forcing them out there!

The party was well underway as we headed into the Nelson Mandela University nature reserve and approached the halfway mark. On the way to the turnaround I spotted a jubilant Thomas Marais who was in high spirits and told me he was “on track for a sub-four.” However, both I and the early tequila downhills caught up to Thomas on the way back. Thomas’ tank engine had overheated in the rising temperatures and he was an unrecognisable shadow of the man I’d seen earlier.

Whilst some of us might be able to handle our liquor better than others, when you start your evening with tequila debits you know it’s only a matter of time before you start paying interest. I had not studied the route profile beforehand but realised we’d dropped down significantly to the seaside. I did my best to continue enjoying the wonderful coastline but one constant concern plagued my thoughts: What goes down must come up*.

* I was worrying about hills but when it’s tequila that’s gone down, it’s usually your last couple of meals that come up.

There is absolutely nothing friendly about the last eight kilometres of the Friendly City Marathon. After completing the Marine Drive stretch just after 34km, we had no choice but to swipe right to start the journey back up Schoenmakerskop. This was indeed a turn for the worse as, not only did we have the arduous uphill to contend with, but we also headed straight into the teeth of a powerful headwind.

I imagine that the only people who feel at home running up Schoenmakerskop would be Australians since the hill was originally the site of a large convict station. The name literally translates as Shoe Makers’ Hill and I uncovered this detailed historical account of Schoenmakerskop whilst researching the origin of the name. Although there is no definitive answer, popular speculation includes more mundane theories like that of a cobbler who plied his trade on the hill or a misspelling of a local artist and former Batavian solider Mr. J Schumaker through to the legend of a fugitive seaman who whose hiding spot was a shallow cave at the side of the hill. Regardless, it’s unlikely anyone was able  to show a clean pair of heels going back up in the suburbs.

If you were feeling a little queasy whilst slowly negotiating Schoenies you were in for an even nastier surprise. The only thing scarier than five kilometres of steady climbing at the end of a marathon were these guys halfway up the hill.

And don’t expect any sympathy for your plight at the tail end of the route. This is a course with zero compassion for your frailties and early morning indulgences with one incredibly steep final hill just before the finish line that is sure to leave you with a hangover (and your legs with a hang-up) the next day.

All sins are finally forgiven and penance is gratefully received as one heads into the finish area within the grounds of the Fountain Vineyard Church – and one gets a chance to enjoy a bit of fellowship with your compatriots.

For those wondering about whether the Friendly City Marathon comes with benefits – on top of a free shirt there is a nice medal for all finishers and those who finish ten marathons are awarded a permanent number. However the primary beneficiary of the event are ‘Retina SA – A cure in sight for Blindness’ with all proceeds going to them.