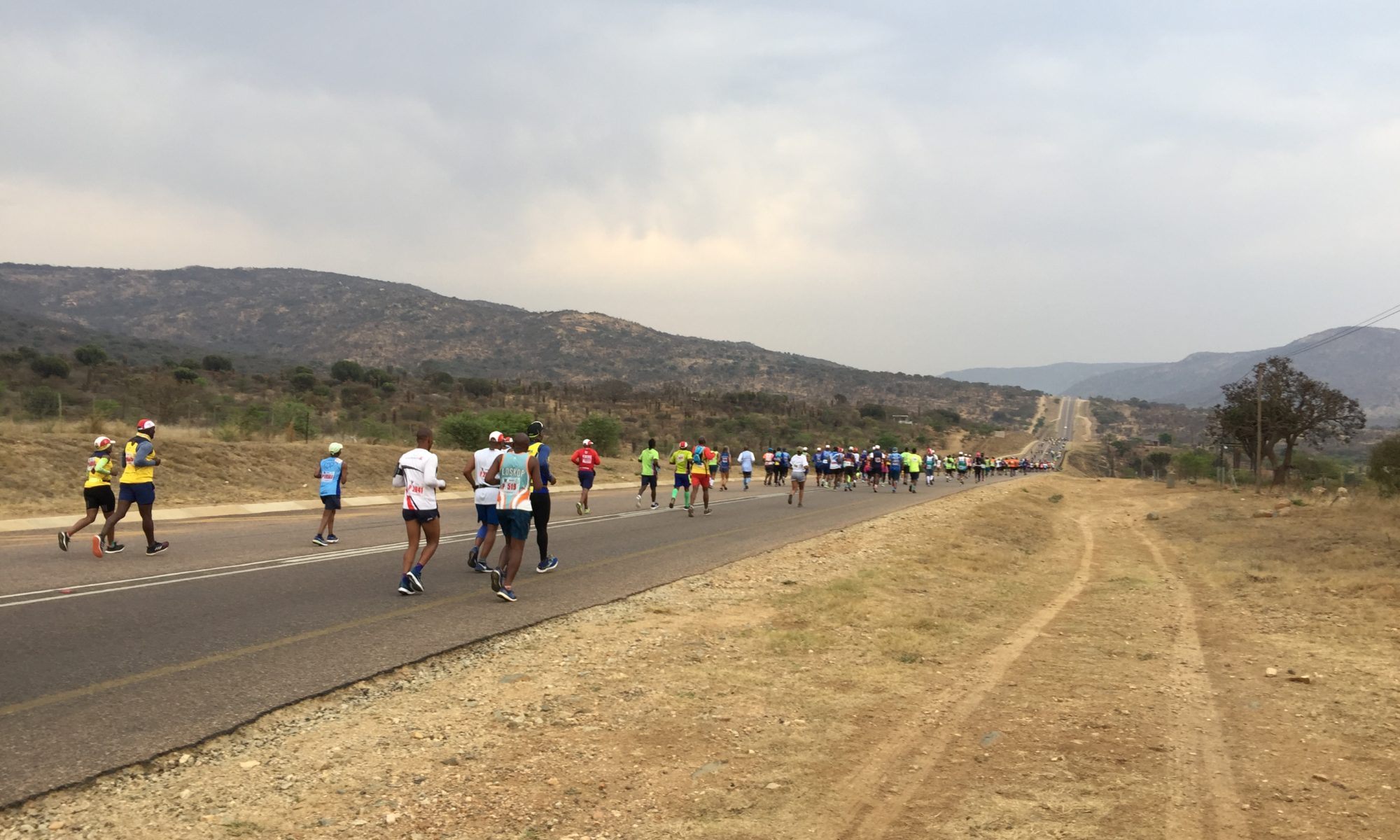 It’s said that sex, politics and religion are the three topics one should always steer well clear of. I am well known for ignoring sensible advice and tackle all three in this race report.

Ultra marathons are hard to come by in the second half of the year in South Africa. As summer heats up, the ultras dry up and by the time you get to the last quarter there is just one road ultra to service your running thirst: Polokwane’s Run4Cancer 48k (which also happens to be the only ultra marathon in the Limpopo Province).

I try to make one running trip a year to Limpopo’s capital city and, since Run4Cancer was the only marathon missing from my Polokwane portfolio, it was the logical place to drag my family over the mid-term school holiday (before anyone calls child services, I did include the sweetener of a couple of nights in a game reserve after the race).

Your race entry fee of R320 includes a high-quality dri-fit shirt as well as a bus ticket to the start and helps to fund awareness and support programs for those suffering with (and affected by) cancer. Whilst the ultra is the main event, there are also 32k, 21k, 10k and 5k options.

The busses were scheduled to leave at 4:30am which makes for a very early wake-up call. Race mornings can sometimes be quite chaotic but the pre-race organisation was particularly efficient with placard-holding volunteers ensuring that no one sold themselves short (or got more than they bargained for) by getting on the wrong bus.

The busses themselves provided a very comfortable ride through to the start, complete with air-conditioning which is a necessity (even before dawn) this close to the Tropic of Capricorn. This part of the world is notoriously hot and my busload of runners nervously watched the large temperature display at the front of the bus steadily rise into the mid-20s by the time we were dropped off (just after 5:30am).

The start itself was indistinguishable from the surrounding rural villages except for a painted line in the road and a few porterloos. The latter provide a pre-race warm up for the fast and the fibrous who made a rapid dash from the bus to ensure that they got to the front of the loo queue.

Speaking of those who struggle to stay on the straight and narrow, many prominent politicians come from Polokwane. Sadly, the Limpopo province has one of the worst records of service delivery and dodgy tenders.

This was at the forefront of my mind when I noticed advertising for the local business above and wondered whether this was where politicians served their apprenticeship (I guess you could call that a VBS* – very bad sign).

* Four marathons were cancelled in 2019 (Two Countries, OR Tambo, Legends and Heroes). One marathon has been cancelled in 2020 to date (Beaufort West). These are all municipality sponsored marathons which I understand have been impacted by the VBS scandal.

In South Africa we seem to have a deluge of “Kardashian Politicians” (across the political spectrum). These are people who are very good at keeping themselves in the media spotlight but (based on my perception) lack any real substance – and it’s a struggle to find any tangible accomplishments that they’ve achieved.

Whilst on the topic of politics, I use marathon running as a means to educate myself better and, with the finish being at the Peter Mokaba Stadium, I thought I’d take a quick look at the life of the man after whom it was named.

Born on 7 January 1959, Peter Ramoshoane Mokaba became an inspirational youth leader in the struggle against apartheid. Although his activities led to him being expelled from school, he still managed to pass matric through self-study.

* The current president of the ANCYL league, Collen Maine, is reportedly well into his 40s. Mysteriously he does not want to reveal his age and has been accused of falsely stating he was 34.9 years old when he was elected ANCYL president in 2015. In the bizarre world that is South African politics, Collen Maine is probably lined up to be the next leader of the ANC Women’s League.

Mokaba is primarily remembered for what he said (and sang) rather than what he did:

The Zion Christian Church (ZCC), with between 8 and 10 million members, is the largest African initiated church in Southern Africa. Their religion blends African traditions and values with the conventional Christian faith and teachings. The ZCC was founded by Engenas Lekganyane in 1924 after he received a revelation from God on the top of Mount Thabakgone (which is near the current Moira site and also serves as the church’s headquarters).

The followers of the church wear a metallic badge* pinned to a swatch of green cloth on their shirts to denote which branch of the church to they belong to. Every Easter millions of pilgrims congregate at Moira – making Polokwane the only place in South Africa with traffic congestion worse than Umhlanga over the long weekend.

* When I first moved up to Johannesburg, I remember wondering why there were so many ‘sheriffs’ in town.

From ZCC Moira, it’s gentle undulations all the way into the early thirties. Running in Polokwane is a bit like eating tofu that’s just fallen from the frying pan onto the kitchen floor – it’s hot, dusty and incredibly bland unless you have something to spice it up. Luckily the people of Polokwane are the salt of the earth – and I seasoned my run with some lovely conversations with other runners.

To highlight the lack of visual appeal in the area, the most notable landmark over the first half of the race was a Total petrol station in the township of Nobody.

Ironically, nobody knows how Nobody got its name but the most popular theory is that after local residents were forcefully evicted from their homes under the apartheid regime, they claimed this piece of land since “Nobody owned it”.

Other than the simmering mirage of scorching tarmac disappearing into the distance, the tofu-like views continued as we headed past the halfway mark. In fact, the only bit of colour during the mid-section of the race was provided by a solitary bright purple jacaranda tree and the even brighter purple of the Hollywoodbets table.

I always find the third quarter of an ultra to be the toughest. As you can see from the photo below, this poor guy had lost all his Vitality by this stage of the race. Luckily the Hollywoodbets team, my vote for best table of the race, was there to revive his status and make him odds-on favourite to make it over the finish line. Had I known how long it would be until we saw liquid again, I would have spent even longer addressing my own dwindling vitality at the table.

Whilst overall race organisation was excellent, whoever was in charge of the water tables let the team down. With the temperature now in the mid-30s, we approached the toughest section of the route – a long, steady, slow-poison climb from the 32 to 40 kilometre mark. A tough climb under tough conditions was made even tougher with no water or any other sustenance.

Discarded sachets* provided evidence that support tables had been around earlier but I assume that after depleting their supplies servicing runners on the shorter distances, they packed up and went home. I spent a long time meandering along the side of the road trying to scavenge a full sachet in the dust but any leftover water had long since evaporated in the Limpopo heat. Whilst turning water into wine is a popular miracle, I contemplated whether a more practical option would be find a ZCC prophet and see whether he was able to turn the salty tears of whining runners into water.

* There were also reports on social media that there was no post-race clean-up resulting in local schools, disgusted with the mess left behind by the runners, organising for their learners to pick up all the rubbish. I contacted the organisers about the water and litter issue and the response is below. It’s pleasing to see races taking accountability for their issues and I am sure that the situation will be resolved in 2020.

Not only was I unable to find any discarded liquid but I also lost my sense of humour. After six kilometres of no water, I hoped that what looked like a support table in the distance was not a delusional dehydrated mirage. Fortunately, it was indeed the Ear Institute support table (who were a sight for sore eyes). The Ear Institute had an excellent table although their attempts to humour the weary runners with motivational posters fell on deaf ears.

From the top of the very long hill at 40km, there are two lovely downhill kilometres to get you to the marathon mark. I remember wishing that they’d settled on a standard marathon as we breached ultra distance with a violent uphill. Fortunately, Polokwane City comes into view from the top of the hill which gives one the motivational push to get to the finish.

The final five kilometres are largely downhill. Having spent a long morning on the R71, you eventually say goodbye to the main road and detour around the outskirts of the city. It’s not long before the impressive Peter Mokaba Stadium, built for the 2010 Soccer World Cup, comes into view and slowly draws one home over the last few kilometres.

There are several marathons and ultras that skirt around the periphery of 2010 soccer stadiums:

Therefore, with all these own goals, it was great to have a genuine ‘spirit of 2010’ experience at the finish of the Run4Cancer Ultra and get the run of the stadium.

Although the drive from Joburg to Polokwane is three simple straightforward hours due north on the N1, my daughters still asked plenty of “Are we there yet?” questions. After taking slightly longer than planned (and well over three hours) to complete my Saturday morning Run4Cancer trip, it was my wife who bore the brunt of repetitive double-barrelled “Is dad here yet?” questions from our daughters – and she looked pretty relieved when I finally appeared on the finishing straight.

I was allowed a quick rest in the players’ dugout before lumbering off to the sweltering car and taking the short drive to the Entabeni Game Reserve for a couple of days of complete relaxation.

It’s a privilege to have your first post marathon beer in a game reserve. However, I did think it was rather unnecessary for mother nature to rub my pedestrian pace in my face later that evening with a brilliant sighting of a couple of real athletes when a pair of cheetah brothers popped out of the bushes.

I promised you sex, politics and religion. For those of you who’ve read this far, just holding out for the ‘sex bit’ here it is (warning, like most sex on television, this section is largely gratuitous).

I still don’t know how birds, bees or educated fleas do it but now I know how lions and leopards do it: In 15 seconds bursts every 10 to 15 minutes over a 5 day period with a barbed penis. For international readers who are interested in running a marathon and going on a safari sex tour, the north of South Africa is the best place to do so. A highlights package is below. 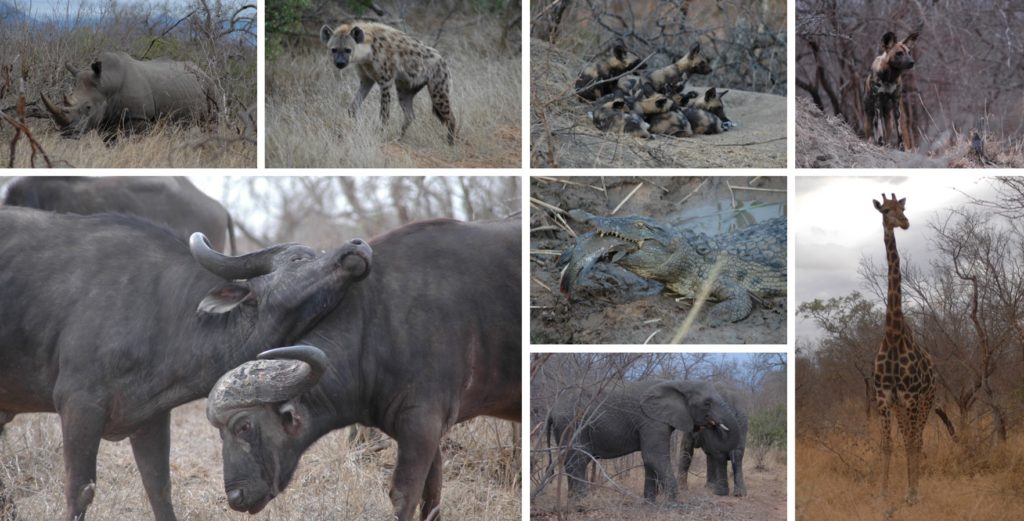 Signing out from the Run4Cancer Ultra. Look out for the next race report.