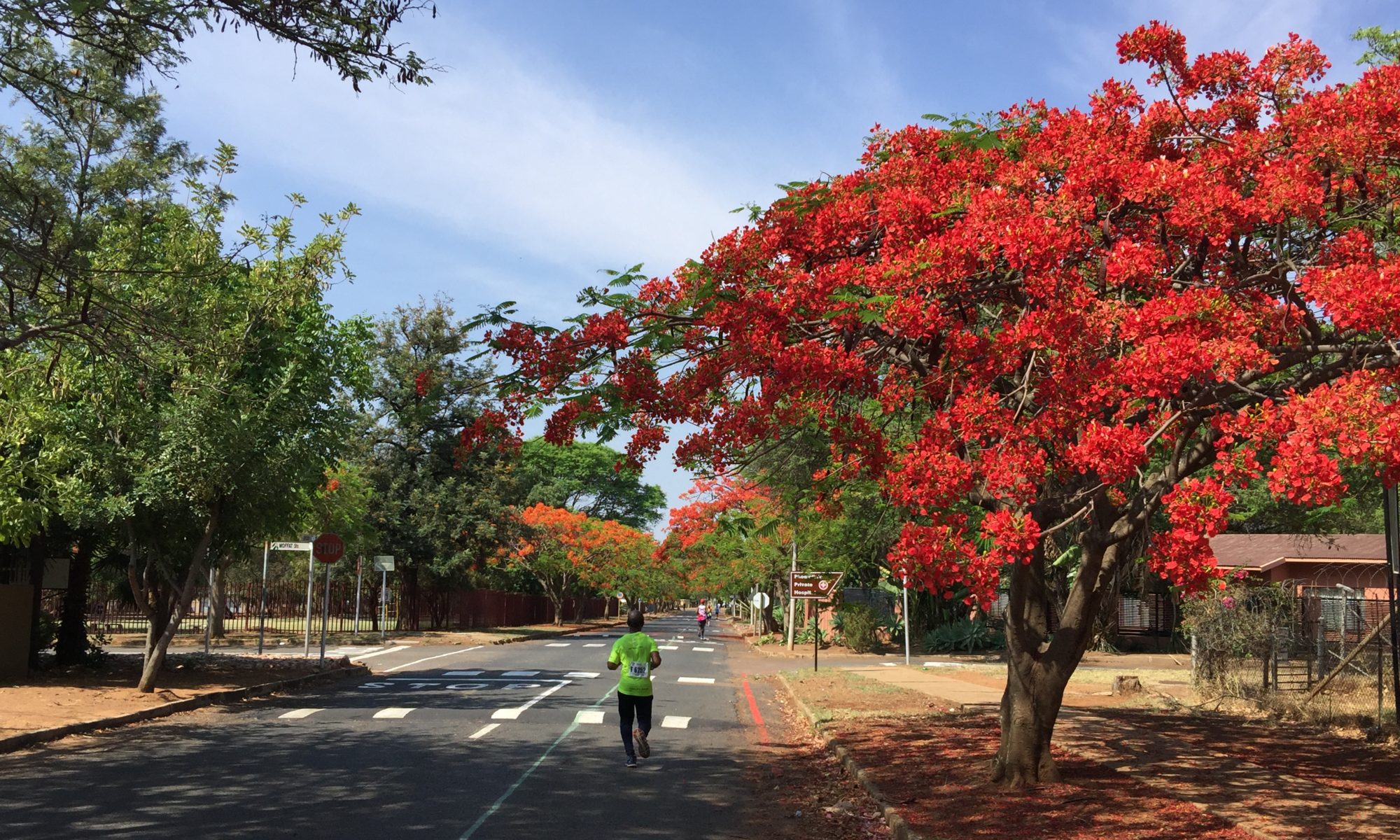 Global warming is starting to make its impression on town names: Warmbad, Afrikaans for “Hot Bath”, recently changed its name (and from liquid to gas) to Bela-Bela, which means Boiling-Boiling in Tswana.

South African runners are generally pretty resilient to heat but I remember passing the discarded bodies of melted runners lying at the side of the road when I previously ran the Bela-Bela Marathon in 2010. Burn out was recently recognised as an official syndrome by the World Health Organisation – and I expect there is an epidemic in Bela-Bela.

Bela-Bela is in the Waterberg region of Limpopo and rudimentary science tells you that combining heat and water results in heaps of humidity. The town is basically one big Bikram Yoga studio during the summer months.

With temperatures usually pushing well into the 30s, the race starts at 5:30am but even Eliud Kipchoge would need a thick layer of sunblock and stronger springs in his shoes if he was to make it home before the Bela-Bela sun reaches boiling point.

Speaking of springs, the town grew up around natural geothermic springs out of which vapor flies at 22,000 litres per hour. Normally people use hot springs to warm up but, at 52 °C (126 °F), the thermal baths are used for a refreshing cool down dip in the resort town of Bela-Bela.

It was therefore with some trepidation that I made the 90 minute (150km) journey north on race morning and driving through a thunderstorm made the journey even more nerve-wracking. However, the thick clouds stuck around as dawn broke so we were fortunate to get a lukewarm start at Warmbad Hoerskool.

You get going with six flat, out-and-back kilometres through the town and surrounding smallholdings. This is followed by another nine kilometres snaking around the town. Overall, a pleasant stretch as the air is still cool and the blossoms are out.  Mixed into this loop are a couple of out-and-back sections which allow you to greet friends and assess* the form of rivals.

* I would suggest that the word ‘assess’ would be the appropriate technical term to use when dogs suss each other out by sniffing butts.

Just past the 15 kilometre mark, you head off into the countryside on a long out-and-back section which, despite having two major (and several minor) climbs, is my favourite part of the route. The first hill is a short but steep and immediate: 60 metres of elevation gain over an even mile. Not that you need it, but this warms  you up for the real tester, just over 100 metres of climbing along 2.5 kilometres of hot tar that takes you from the late teens to just over the halfway mark.

The best support tables of the race are also along this section. Whilst there are many bucket list marathons in South Africa, Bela-Bela Marathon is the only one I know of where you can get a KFC Bucket Meal. Fortunately, they only had the healthy stuff like bananas, Marie biscuits and jelly-babies left by the time I arrived so I didn’t overload my cholesterol and kick the bucket.

After the major climb there are a series of razor-like undulations until the turnaround point at 25k. The turnaround point is also exactly where the tar turns to dirt and I wondered whether it would be preferable to forge ahead and explore this section rather than have to do the arduous ‘victory’ lap loop once back in town.

I had enjoyed running much of the first half of the race with Susan and CJ from Germiston Callies but the last I saw of them was the photo below at the turnaround point. After which, they sped off and disappeared into the distance, leaving me in the Limpopo dust. However, the (by then) well-rested pair were waiting for me when I eventually crossed the finish line – and I subsequently found out that I was on first half ‘pacer’ duties after being “Thanked” for the duly attained Comrades D seedings.

I referred earlier to the impact of climate change and noted another scary sight on the way back into town. Whilst environmentalists and scientists are focussing on the shrinking North and South Polar Caps, entire poles are disappearing in the rising Bela-Bela heat!

I was also able to reflect later in the race that many things are quickly becoming redundant in South Africa like this sign below (thanks Eskom). Whilst runners might think that they are immune to rolling blackouts, I’ve heard rumours that at Stage 12 loadshedding Voltaren will be classified as a Class A drug and its usage restricted for application on the lazy asses of politicians.

I wrote about my recent safari experience in the Run4Cancer race report. I’m always keen to learn new tricks and banked an excellent piece of advice from one of the game rangers: That the luxuriously soft leaves of the Weeping-Wattle can be used as toilet paper if you need to leave more than footprints behind in the bush. I thought I spotted a Weeping-Wattle during the Bela-Bela Marathon but it was actually an Acacia. Acacia leaves have tiny thorny barbs that will rip you to shreds. Luckily, I never leave the home in my running shoes without a fat bankie of white gold.

I don’t know why they called the town Bela-Bela and not just Bela (perhaps the town councillor had a stutter) but they like to repeat things here. Unfortunately for marathon runners this means that five of the last six kilometres are a repeat of the same out-and-back section you did earlier that morning – an excruciating and mindless grind the second time around.

As someone who is known to get really thirsty towards the end of a marathon, I keep myself going by visualising ice-cold beer. However, on this occasion I must have started to get hungry on the final plod – which is probably why the sign below (that I had missed earlier that morning when I still had fresh eyes) caught my attention the second time around.

Things that go well together:

* Number 4 only applies in Bela-Bela.

Unfortunately, I didn’t stick around for lunch after the marathon so can’t comment on the ‘eat what you treat’ combo.

The start and finish are at the Warmbad Hoerskool. The school grounds are very attractive but, like every marathon I’ve run that finishes in a school, they treat you like a kid and force you to run a lap around their fields before you can collect your medal.

In addition to your medal, you also get a nice bag full of groceries from the local Super Spar – the title sponsor (and have been for an incredible 25 years).

I am a big fan of using beer integrally in my post-marathon rehydration routine and was therefore intrigued by a sign on the school fields advertising “Dopper Lekkerte”. My Afrikaans is ‘n bietjie swak but I know that “dop” means drink and “lekker” means delicious. “Delicious dops” sounded pretty good after surviving the Bela-Bela heat but I had to restrain myself as I was driving home.

I found out later that, had I gone searching for my favourite post-marathon beverage, I would have been sadly disappointed. The “Doppers” are a conservative denomination of the Dutch Reformed Church who abhor the drinking of alcohol and dancing*.

* I am not sure whether they don’t like drinking alcohol purely because it might lead to dancing** but if someone wants to make ‘Voetverloer’ (the South African version of ‘Footloose’) you can write the script in Bela-Bela.

** I have also been told from unconfirmed sources that having sex standing up is also not allowed (as it might lead to dancing).

Everyone has their vices and I expect that the Doppers would have ploughed theirs into the “Lekkerte” – I have made a note to bring some cash and stock up on melktert and koeksisters the next time I run Bela-Bela.

The Bela-Bela heat does strange things to people and on the way to the car I saw this bloke above who was getting ready to do some warm down leaps into the school long jump pit (which is also the closest you’ll get to a beach in Limpopo).