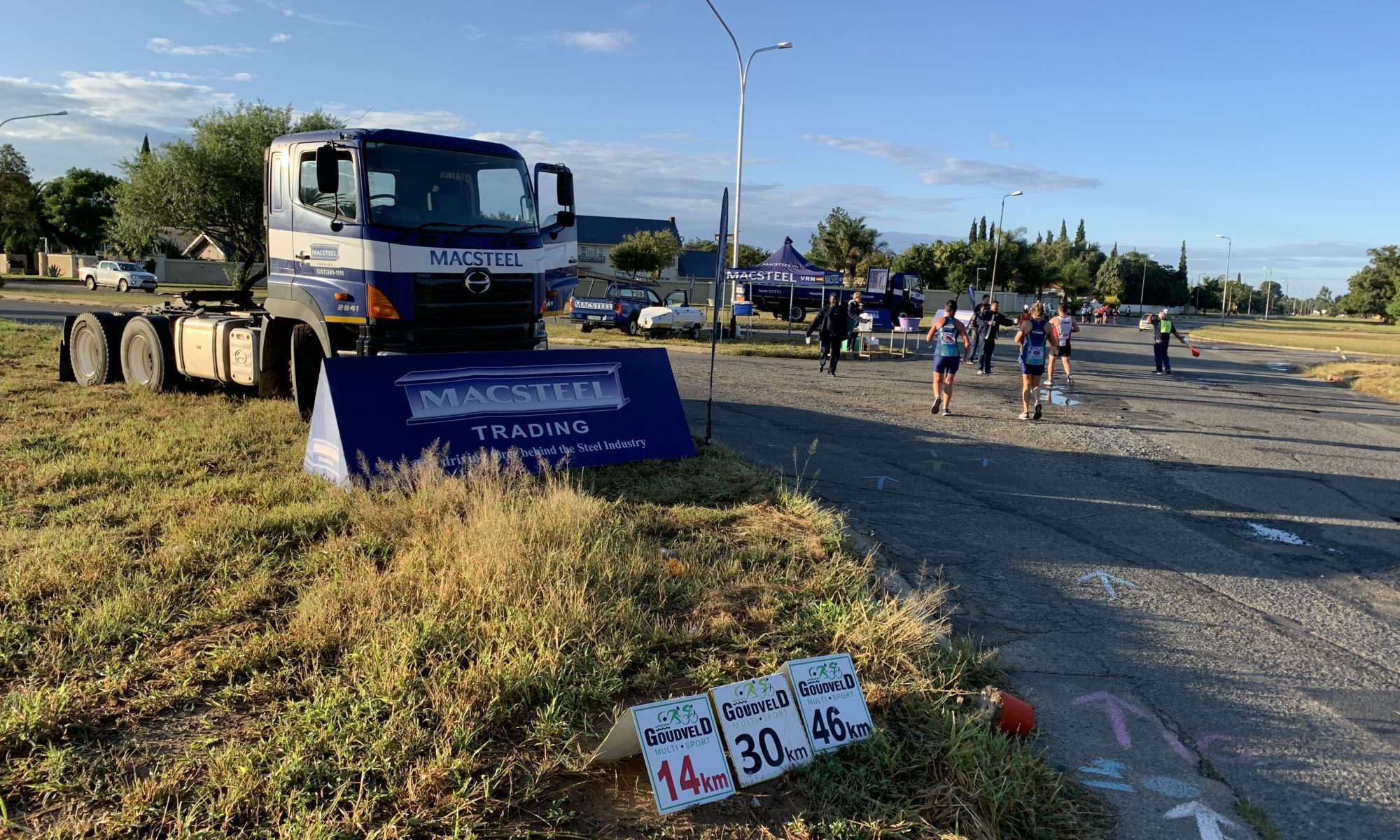 I’ve seen plenty of “You know you’re a runner when…” lists. They usually include items like getting up earlier on the weekend than during the week, having one pair of smart shoes and a dozen pairs of running shoes, spending more on running kit than on food, etc.

Unfortunately, for you the aspirant real runner, all those lists are completely bogus. The real test of whether you’re a real runner or not is, of your own volition and free will, travelling to Welkom to take part in a triple-lap ultra. That’s my excuse for making the three hour drive south to run the Anco 48k Ultra and I’m sticking to it.

For those not buying the rationale, when you’re on a mission to run every marathon in the country, triple-lap ultras in Welkom have to be done – and it was either this or an eight hour drive to De Aar for the only other marathon in the country that weekend that I hadn’t yet run. Whilst running a marathon in De Aar is something that excites me (which I guess is another sign of being an authentic running junkie), I had done the long drive to Kimberley for the 50th Diamond Marathon the previous week and my brain found three laps in the Free State a more attractive proposition than driving 750 kilometres into the middle of the Karoo Desert.

And for those still thinking I need to be institutionalized and doubting possible justifications for travelling to Welkom, here’s three more reasons.

My timing was badly off on the Friday. I had endured load shedding at home for most of the morning, drove most of the afternoon and checked into my B&B just in time for load shedding to kick in there. This seemed like a bad omen. I can’t say that I was particularly looking forward to running my first triple-lap ultra and my sense of foreboding was heightened with a massive overnight thunderstorm.

At least the storm had given Welkom a good rinse and meant that the morning conditions were pleasantly cool. Goudveld Multi Sport, the organising club, keep life simple with 16, 32 and 48k options and a small group of 100 Free State runners and one Gautie set off together in the dark at 5:30am.

My mental approach was that the first lap was a warm up “and didn’t really count.” I also figured that I could finish the first lap before the sun got too hot. I normally interrupt my runs with frequent photo stops but there is a not a lot to look at in Welkom (and I figured that I’d have a two more chances to capture whatever caught my eye).

The first lap actually wasn’t that bad – after all, 16 kilometres is just a decent training run. My plan for the next two laps was just to run from water table to water table – and reward myself with a long walk (as well as a bite to eat) at each table. This worked pretty well and was not too taxing since there were six tables on the lap.

As there are no real hills in Welkom, the most difficult section was the four kilometre tableless stretch between the 7.5 and 11.5 kilometre marks. I mitigated this risk by picking a thirsty looking tree at the 9.5 kilometre mark and giving something back to nature. In fact, I slipped into such a consistent rhythm that the same tree got a good watering on all three laps.

Actually, there are two hills on the course – both are bridges over the railway line. The picture below is of the second hill on the first lap. Such was the novelty of elevation that I didn’t even stop for a photo on laps two and three.

Welkom is so anti-hill that they celebrate their ‘flats’ with fancy accolades – like this slightly dilapidated block called “Olympic Mansions.”

The only large curves you’ll find in Welkom are at the recently opened Luv Land store. I must admit that I never thought I’d see the day when Welkom got its own sex shop – but I guess mielie farmers Luv Land even more than the average citizen. I can’t even begin to guess what the top selling item would be, although I guess that shop’s customers now know the difference between a ‘ploughing with a hoe’ and ‘ploughing a ho’.

If you do want to witness mating in a more natural environment, Welkom has saline pans to the south-west of the city which provide the breeding grounds for thousands of flamingos. Unfortunately, the route sticks to the north and the closest you get to seeing these beautiful birds are replica models in the suburb of Flamingo Park on the city’s northern limits.

The most exciting bird I saw along the route was a hadeda. These ugly, noisy birds with the uncanny ability to carpet bomb garden furniture with military precision just before you have guests around are detested in most parts of the country – but I guess in Welkom anything goes. Here the hadeda is revered to the extent that property managing agents name their companies after them.

I was, however, corrected by Izak Venter after the race. With so few runners you remember everyone along the route and I remembered running past three runners dressed in Barney the Dinosaur purple – which turns out to be the running kit of the Flamingo Running Club. 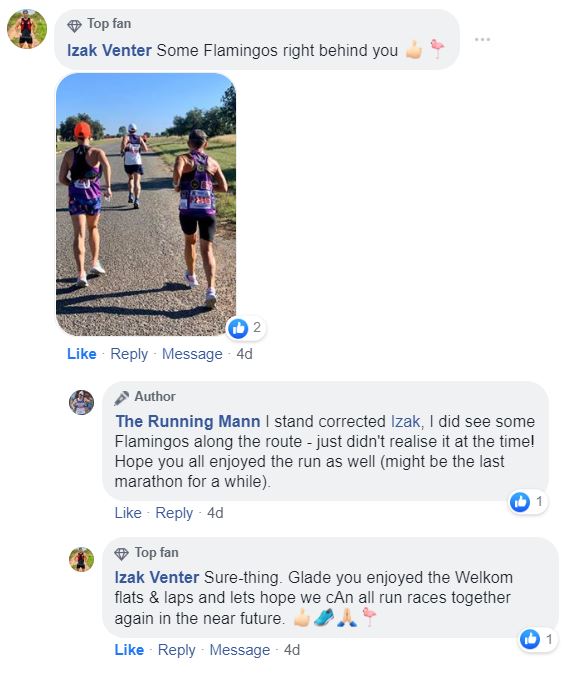 I managed to make it to close to the end of the second lap before being lapped by the winner. I am not an envious or spiteful person by nature but I despised this fine bastard of an athlete as he disappeared into the distance and coveted the additional 16 kilometres that he had run.

I managed to get to the last table on the lap, organised by the local Battery Centre, and asked them if that had any jumper cables for me. They didn’t but, like all the support tables on route, they did have plenty of liquids and solids to keep the runners going.

My tactic of running table to table (combined with the odd strategic pit stop) got me through the second lap. I took the photo below so that I could cherish and reminisce the time that I had run 32 kilometres and chose to head off on a final lap around the Welkom wilderness instead of succumbing to the temptation of cooling down with a dip in the public swimming baths*.

* The race starts outside the public swimming pool and the flyer promised “Free entry to all runners”. Had I stopped I would have been sadly disappointed as the pool was closed indefinitely for renovations. I wrote about the shocking state of Free State roads in the Bielie Mielie Marathon report and it looks like their swimming pools have even worse potholes than the roads.

Now 32 kilometres is a decent distance but it doesn’t warrant the investment of a three hour drive and a 4:30am wake-up call. Plus I was looking forward to dropping, “I ran a triple-lap ultra Welkom this weekend” into as many conversations as possible during the forthcoming week. That got me away from the temptation of a two-lap bail.

With two laps and close to 70% of the distance covered, I have to admit at rather enjoying that final lap. I did however take some time to stop and smell the flowers. In retrospect, I’m glad I savoured those final 16 kilometres as it looks it will be a long time until we’ll get to run another marathon.

This was the last weekend of organised running before the Corona-cancellations hit. When the announcement came through congregations of 100 or more people was illegal, I thought triple-lap Free State ultras would be immune. After all, the best way to practice “social distancing” (both literally and figuratively) is solitary distance running – and you’re never going to get more than 100 people voluntarily running a triple-lap ultra in Welkom.

I have to confess that I had deliberately withheld information from my wife before the race, only telling her later that evening (and a couple of beers to the good) that the weekend’s run was a triple-lap ultra in Welkom. By the incredulous look on her face, I think she realised that I’d finally taken this running addiction a step (or should that be a lap) too far. 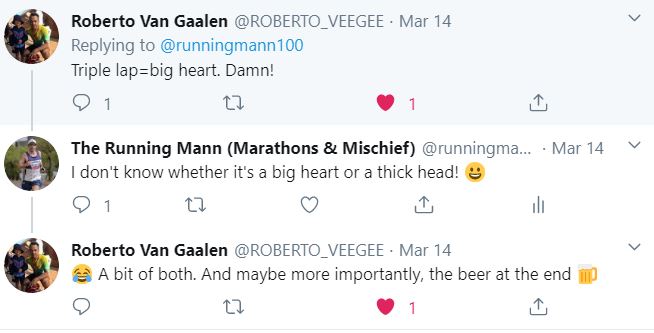 My wife was busy planning a family intervention when Cyril stepped in and solved the problem that Sunday evening. With the entire distance running community having to go cold turkey until May at the earliest the future is uncertain. However, for a handful of hardy ultra runners – no matter what happens in the future, we’ll always have Welkom.

After three weeks of no marathons, a triple-lap ultra in Welkom sounds pretty good to me (and what I’d give right now for one more lap around Circle City). You can leave the cheesy “You know you’re a runner when…” lists and the exotic big city European marathons to the pretentious masses. If you want real street cred, three-laps on the Welkom tarmac is how you earn it.

Last weekend I managed to complete a full Home IronMan to raise money for Just The One Foundation. In retrospect, a triple-lap ultra around Welkom was the best mental preparation one could do before taking on a 13-hour home endurance challenge.