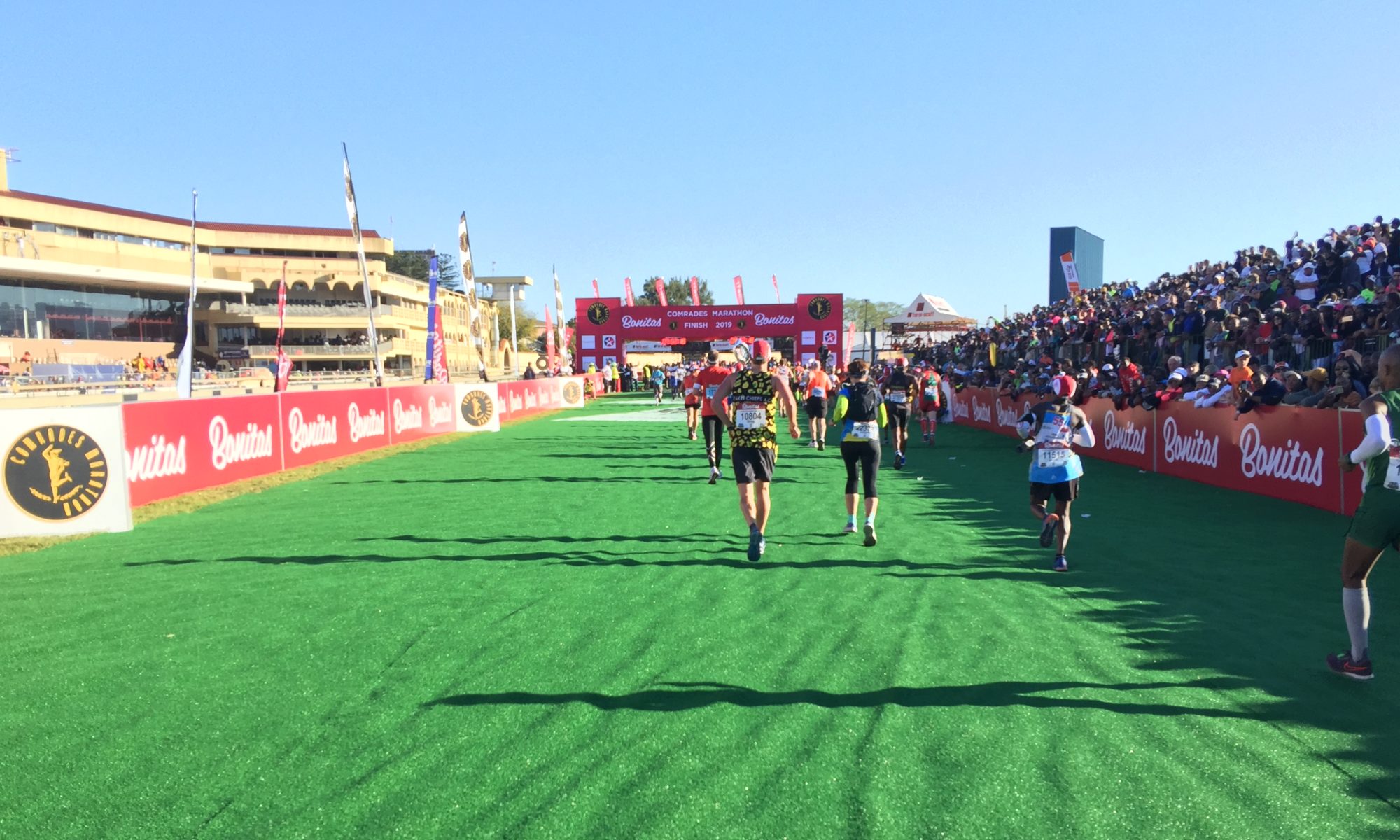 [This article was originally published on Sport24.co.za]

At lunch time on 14 May, I was taking advantage of a gap between video calls by doing another lockdown run up and down my driveway.

As you can imagine, driveway laps are not particularly interesting and I welcome any distraction from the monotony. Therefore, every vibration on my phone results in an excited glance at the screen to see whatever notification has been delivered.

I was about 30 minutes into my regular 10km jog when the latest buzz presented the email notification, “Media Release: 2020 Comrades Marathon has been cancelled.”

I didn’t even break stride.

As the Covid-19 lockdown drew on, it was never a question of ‘if’ the Comrades would be cancelled, but ‘when’.

The announcement was inevitable and expected. There was little shock or surprise from the running community.

However, as news that there would be “no refunds for local runners” hit social media, there was an eruption of vociferous hostility towards the Comrades Marathon Association (CMA), the likes of which are normally only reserved for government ministers.

Frustrated runners had already seen the Two Oceans, Irene and Loskop (the second, third and fourth largest ultras in the country) cancelled without refunds* and this was the final straw.

* Loskop subsequently announced on 22 May that they would in fact be refunding all entrants. Look out for follow-up articles covering the refund policies of South Africa’s other big marathons and ultras.

Taking the emotion (and expletives) out of the furore, the accusations were:

As one of those runners, I decided it was time to investigate the merit of those charges and take an objective look at the costs, financials and rationale behind the refund / no-refund decision.

A primary misconception is that most (or even a significant portion) of the R42 million budget is spent on race day. The reality is that a majority of the budget is spent in the build-up to the event and in fixed monthly expenses.

According to chairperson Cheryl Winn, the CMA has a fixed monthly cost of around R950 000 which includes the salaries of 18 full time staff, rates and utilities charges on three Pietermaritzburg properties and the day-to-day costs associated with running an enterprise. On top of this there are many marketing, advertising and consulting expenses incurred during the nine-month build-up to the race (like the Comrades Roadshows and Seminars).

Many of the major actual race day costs (like food, energy drinks and water) are not financial transactions as they are sponsored “in kind” (for example by Coca-Cola and Thisti). Furthermore, there are substantial venue hire deposits for the expo at the Durban International Convention Centre and the finish at the Moses Mabhida Stadium*.

* There is a chance the venue hire deposits will be refunded or deferred to 2021 but this is still to be negotiated with the City of Durban.

Another major expense is that of the race shirts and goody bags. Due to the scale of the Comrades, the costs for the race shirt and goody bag had already been incurred before the event was in jeopardy. As for whether they are fully sponsored or not, Winn provided the following clarification: “CMA pays for goody bags. Prior to impact of Covid-19 and if race had gone ahead race t-shirts would have been sponsored by Mr Price. However as a consequence of race cancellation, CMA is having to contribute half of the cost.”

The CMA was quick to point out that the value of the goody bag exceeds the R600 entry fee but the promise of a shirt and goody bag did little to placate the irate athletes, many of whom said that they would not wear the shirt of a race that they had not run*.

* 2020 Entrants that do not want their goody bag, please notify info@comrades.com and the shirt and contents will be donated to a local charity.

With the race being cancelled, CMA receives only a portion of the sponsorship funds. Race sponsors are losing out on the majority of the exposure that their brands would have received and are perfectly within their rights to hold back a significant percentage of the promised funds.

As a registered Non-Profit Organisation, the CMA’s financials are freely available. Last year there was a modest R753 000 surplus, but a substantial loss totalling R3.3 million was incurred over the preceding two years. This deficit was largely due to the loss of a headline sponsor and an incorrect 20-year-old accounting decision that VAT payments were not required on international entries (the latter of which resulted in a large back payment to SARS after a voluntary disclosure when it was detected by the CMA Board Finance Committee).

The CMA can hardly be accused of squandering money. Over the last few years they operated under what were essentially austerity measures, delaying ‘optional’ expenditure like building maintenance costs and the filling of two staff vacancies. Winn described the CMA’s financial situation as being “comfortably solvent” before the Covid-19 pandemic. As such, long overdue building maintenance was finally completed and two vacancies filled in the first quarter of 2020. Unfortunately, these expenses have placed further pressure on the 2020 financials.

Where the Comrades Marathon Association has been lacking is in regular, open and transparent communication. Many of the misconceptions, misunderstandings and negative sentiment could have been avoided with better and more frequent communication to the entrants.

This was further exposed when a poorly timed Virtual Comrades Race* announcement (with 5km, 10km, 21km, 45km and 90km options) was made a few days after the race cancellation. The full press release stated that this was free to all 2020 Comrades entrants, but there would be a R150 entry fee for everyone else. However, the social media promo posts neglected to mention the “free to existing 2020 entrants” clause which resulted in a fresh social media furore that “Comrades is all about the money” and “I can’t believe they’re trying to fleece us again.”

* The ‘Race The Comrades Legends’ virtual race already has almost 5 000 entries, comprising 2 371 free entries to 2020 Comrades entrants and 2 557 paid entries across the five available distances. The first entrant to sign up was Louis Massyn who was aiming for a record 48th Comrades medal in 2020.

A detailed “Open Letter to Comrades Marathon Runners” was sent out a week after the race cancellation from the desk of CMA chairperson Cheryl Winn. This did an excellent job of explaining the financial position and why refunds could not be provided.

However, one could not help but think that sending out this communication before the formal cancellation would have gone a long way to avoiding the resultant controversy.

Probably the most pertinent information for the aggrieved runner was at the end of the letter: That the intention, if financially and legally possible, is that 2020 entrants will be given substantially discounted preferential entries for the 2021 Comrades Marathon Centenary Race.

The ethics of substitutions

Keeping the substitution entries open after the Covid-19 lockdown without explicitly clarifying the refund policy appeared to be at best unethical and at worst totally unscrupulous. However, digging deeper it appears that is was more an unwillingness or inability to adapt to the radically changed landscape that Covid-19 presented.

According to Winn, “It was an unfortunate coincidence that could never have been foreseen that the substitution period which had been cast in stone in October 2019 happened to coincide with the onslaught of Covid-19. CMA did nothing to actively entice runners to take up substitutions and it was simply a facility which was available and to which 485 runners chose willingly to avail themselves.”

This lack of accountability is like the wicked witch throwing up her hands, claiming it’s not her fault that Hansel and Gretel were enticed to enter her gingerbread house. However, in the CMA’s defence, keeping substitutions open was more ill-conceived than greedy as the additional revenue from the 495 substitution entries is marginal (around R100 000 from R200-per-runner substitution fee).

The final charge levelled against the CMA was their decision to defer international entries whilst loyal South Africans were ‘shown the middle finger’. International entrants are a minority of the field and, having paid over six times the local entrance fee, have bought themselves a ‘business class ticket’ to the event. This entitles them to a little extra legroom (and income from international entries helps to subsidise the cost of local entries).

As to whether or not the CMA expects to have a funding surplus or deficit at the end of 2020, Winn responded, “Unless we are able to secure Covid-19 relief funding from the government (for which we are in the process of applying) we will most definitely reflect a deficit for the year.”

There are no winners in the Covid-19 pandemic. Communication and transparency from the CMA in the lead-up to the cancellation announcement definitely left a lot to be desired. However, looking at the facts and figures, one cannot fault their decision-making. The Comrades Marathon Association has come up with the best possible lose-lose scenario. Your R600 entry fee is not making anyone rich. Although there are a lot of South Africans who could use an extra R600 during the pandemic, securing the long-term future of the greatest ultra-marathon the planet is more important.

Stuart Mann has run over 240 marathons and ultras all around South Africa and the world (including ten Comrades Marathons). He writes the popular “Running Mann” blog and his articles have featured in numerous local and international publications. He assisted over 80 athletes with sponsored and subsidised Comrades and Two Oceans entries in 2020. You can follow his adventures on Facebook, Twitter and Instagram.

4 Replies to “Money or the Goody Bag? The Great Comrades Refund Debate”