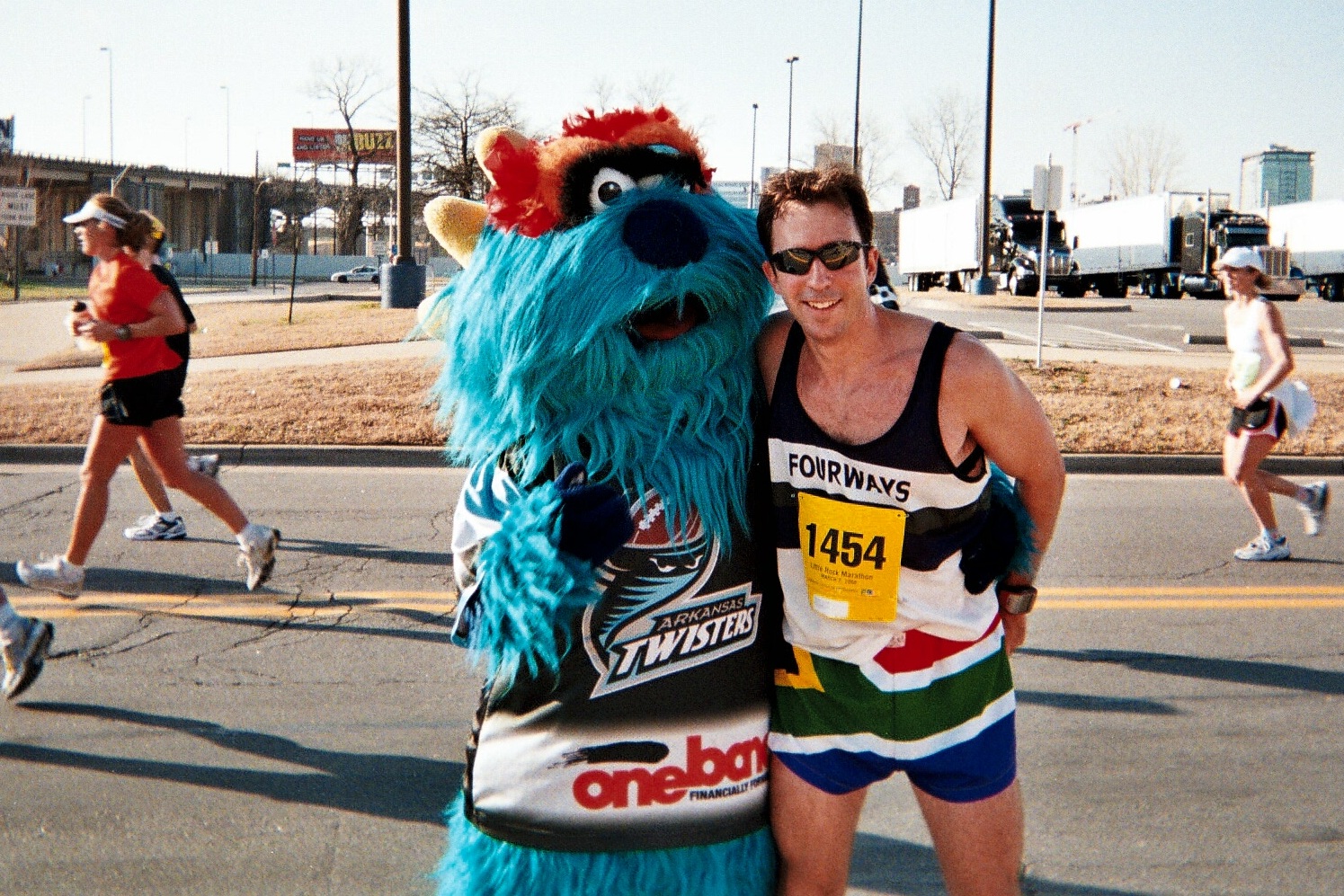 My standard process for entering US marathons involves looking at marathonguide.com’s calendar and figuring out (a) which marathons are still open for entry and (b) can be reached fairly easily with a flight re-routing. For this trip to the US, I had to do the marathon planning whilst on holiday in Japan, so I did my best navigating of the web that I could on a Japanese keyboard. I managed to get onto the marathonguide site and found the Little Rock Marathon, and saw that I could still enter and easily route my flights via “Little Rock, AR.”

Not being completely up to speed on American postal codes and state acronyms, I thought AR meant Arizona, so there I was thinking this would mean running in what I assumed would be distinctive desert terrain. I had never run in Arizona before and was really looking forward to the experience, and it therefore came as a bit of a shock to me when the pilot announced our imminent arrival in Little Rock, Arkansas!

I think I must have turned white as a sheet, because the flight attendant was asking me if I felt OK. The fact that the race’s main sponsor was the Arkansas Democratic Gazette should have been a bit of a giveaway clue, but to be honest, it was probably the biggest shock of my life. I think I would have looked less concerned if the pilot said that one of the plane’s wings had just fallen off!

Luckily, when I am stupid, I am consistently so, and I had managed to book flights, reserve a hotel and enter a marathon all in Arkansas, in spite of thinking all the time that I was doing so in Arizona. I can tell you I was mightily relieved when my sheepish enquiries validated that there was in fact no Little Rock in Arizona, so “I would probably be OK.” (I also felt a bit better after the race, when the bloke I was sitting next to on the flight from Little Rock to Detroit said that he lives in a town with the same name as a town in Arizona, and his post “constantly gets delivered there.”)

Little Rock is in fact the capital of Arkansas, it is close to the geographic centre of the US, and back then had about 180,000 residents, with 650,000 in the greater metropolitan area. It is Bill Clinton’s home state and you are constantly reminded of this wherever you go. The main tourist attraction is the William J. Clinton Presidential Center, which is actually quite interesting if you can get past the Bill and Hillary propaganda.

Some presidents are a hard act to follow but, according to Washington staffers, Bill Clinton was more of a hard act to swallow. Most of the other tourist ‘attractions’ have a Clinton edge, and every second shop sells “I Miss Bill” T-shirts. (Now, in 2020, after Hillary’s unsuccessful presidential run in 2016 and Trump’s presidency of the last four years, I wonder if those shirts are even more popular.)

The entry fee for the race was $85, but if you wanted “a little extra pampering and piece of mind on race day,” for an extra $20 you could purchase a “Perks Membership.” This got you into the VIP area with private gear check-in, toilets, food and beverages, a complimentary photo, personal cheerleaders – “to calm your nerves prior to race start” – and a pre-race massage.

At the Expo, I came across a Marines table, promoting the Marine Corps Marathon, which is run in Washington DC each October and is one of the ‘big deal’ marathons in the US). At their stall you could do pull-ups to earn yourself a prize, and my 18 earned me a Marines beanie. Also at the expo were various speakers, including coach Bart Yasso, of Yasso 800s fame/ignominy.

In Search of Hills… 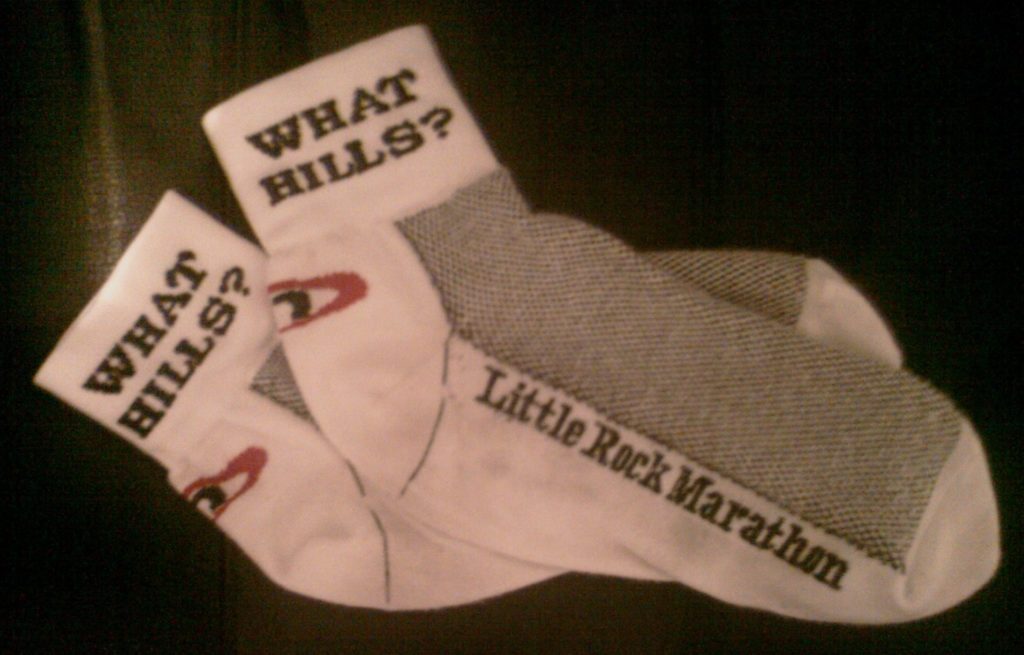 The weather on race morning was pleasant, so shorts and a vest were all that was needed for race attire, but my timing was obviously good, even if my geography wasn’t, because just the next weekend they had snow in Little Rock. There was a total of 7500 runners on race day. A 5km race kicked things off at 7:50am, with the marathon, half marathon and four-leg marathon relay runners getting going 10 minutes later. (They also allowed slowpokes to start at 6am, but if you do this and go at a pace faster than for a six-hour finish, you get disqualified.)

Rather appropriately, that the race itself starts in President Clinton avenue, and the route takes one past the Clinton Presidential Center, the Arkansas governor’s mansion, Arkansas Capitol building, Central High School (the first integrated school in the USA, and hence historically relevant as the site of some unsavoury demonstrations at the time), and long stretches along the Arkansas river. This was in days before really good cell phone cameras, so I ran with one of those little plastic disposable cameras, and I asked fellow runners or spectators to take pics of me along the way, including with all the notable landmarks.

I would call the course flat to moderate, and the branded race clothing even uses the slogan “What Hills!?” However, some of the Americans I spoke to afterwards complained of tired legs from the “tough hills,” and I passed a marine walking up one of these “tough hills” about 2km from the finish. (I assumed he was a marine, because he was wearing a Marines T-shirt.) Strangely, he did not look very impressed when I jokingly told him that I thought marines were supposed to be tough, and that if he wanted to wear a Marines shirt, he really shouldn’t be walking…

My charge for the finish line was temporarily halted whilst I submitted my application to join the “Hot Legs” running club. There was a really good crowd at the finish line and the announcer gave me a very warm welcome, along the lines of “Here comes Stuart Mann all the way from South Africa, home to many of the best marathons in the world, including the most famous of them all, the Comrades Marathon.” (Most American marathoners know about the Comrades, and many know about the Two Oceans as well.)

This is the first race where I received two shirts – you get a ‘normal’ one at registration, and then a finisher’s performance shirt after crossing the line. Unfortunately, I was not able to attend the “Big N Bodacious” post-race party at the Whole Hog Cafe (complimentary with one’s marathon entry), because I had a flight to freezing Michigan later that afternoon. Also, the race pack boasts that they have the “world’s biggest finisher’s medal,” and it truly is a monster. It actually caused me to get some ‘special attention’ from the US airport security at Dulles Airport, because I was carrying so much metal in my hand luggage!

Keeping with the theme of things big, the Little Rock organisers have a rather interesting prize for fatties: The top three Clydesdale (which is a breed of draft horse known for pulling heavy loads) and Athena (chunky Roman warrior goddess) competitors get a special award. The qualification for this prestigious category is weighing over 200 pounds (91kg) for males and over 160 pounds (73kg) for women. I am not sure how they determine who qualifies, as I did not see any weighbridges along the route, but anyway, I think that this is something that my running club in Joburg, Fourways, should consider for the next awards dinner, i.e. figuring out, pound for pound, who the fastest runner in the club really is. My money would be on some of our past and present Chairmen…

This article originally appeared as my column in the October 2020 edition of Modern Athlete.