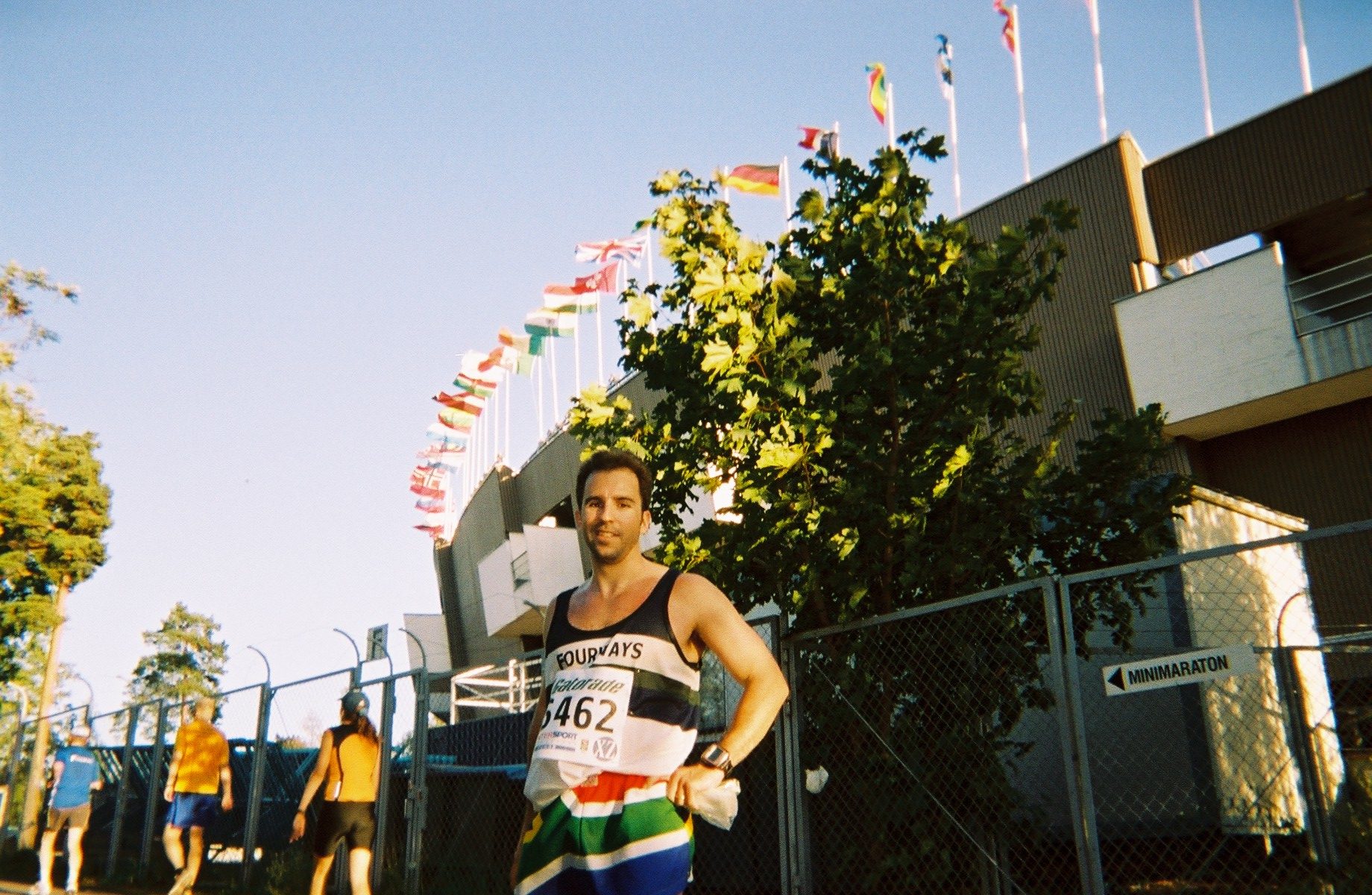 A business trip to the UK provided the opportunity to spend some air miles and detour via Helsinki to take part in their marathon, which is the second largest marathon in Scandinavia (after Stockholm), with 6500 entrants.

Helsinki hosted the 1952 Olympics Games, with Emil Zátopek of Czechoslovakia famously winning the long distance treble of the 5000m, 10,000m and marathon – an achievement that has never been equalled. The start of the present-day marathon take place with the Olympic Stadium as backdrop, with the start line itself is next to the statue of Paavo Nurmi, the original ‘Flying Finn’ who earned nine golds and three silvers from his 12 Olympic starts.

The race has a late afternoon start at 3pm, so I arrived with tired legs after a full day of sightseeing. The temperature was in the mid-20s – which is considered brutally hot for Finland – and the first part of the race was indeed quite warm, but it dropped significantly when we ran alongside the coast and were cooled by the breeze coming off the Baltic sea. As the day turned into a long summer evening it was actually quite a novelty to have the temperature getting progressively cooler during the course of the race.

The route was pleasant, with long stretches along rivers, estuaries and the coastline, with the city itself playing a very minor role in proceedings. The water tables were frequent and supplied Gatorade and water. Some tables also provided bananas and “salted cucumbers” (i.e. gherkins), but the most popular sustenance seemed to be raisins… which I have always been led to believe are a diuretic. Thankfully, you will be pleased to know there were also plenty of porta-loos on the route!

Finland has the second highest per capita alcohol consumption in the European Union, but based on the sheer volume of locals I observed drinking at all times of the day during my two-day visit, they are making a concerted effort to push the Irish from the top spot! However, this did make for some vocal and vociferous crowd support along the course. (This got me thinking that our equivalent would entail being South Afri-caned at the races… which I suppose would be rather appropriate, if there is any truth to the rumours about the ‘performance drink’ of choice during the Fordyce era.)

The final few hundred metres are a real highlight, as you enter the Olympic Stadium and do a circuit around the track to complete the race. The organisers add to this unique experience by flashing your name on the big screen, with your time and position as you cross the finish line. This grandeur (as well as the fact that it was now well into beer time) inspired me to run a fast Finnish finish! The medal that you are then presented with weighs in at well over a kilogram, and has to be the biggest, fattest and heaviest I have ever received!

* A record later surpassed by both the Little Rock Marathon in Arkansas, USA, and the Volksrust Marathon in Mpumalanga, SA, which actually hand out still bigger medals!

Other than its drinking prowess, Finland is famous for Nokia, obscure heavy metal bands, and the sauna. Believe it or not, there is one sauna for every three people in Finland, and no trip here would be complete without a genuine Finnish sauna. As luck would have it, the race website promised “an exotic experience of Finnish sauna, shower and swimming pool” at the Olympic aqua centre after the race, and since this exotic post-marathon experience intrigued me, I hobbled the few hundred metres to the swimming complex.

The saunas have a strict no costume policy, and my curiosity quickly turned to consternation when I realised that everything was gender-segregated, and thus sharing a cramped sauna with thousands of naked, bedraggled Vikings was as exotic as it got. Luckily, I am quite secure in my sexuality, or I would still be having nightmares about bumping into an Icelandic…