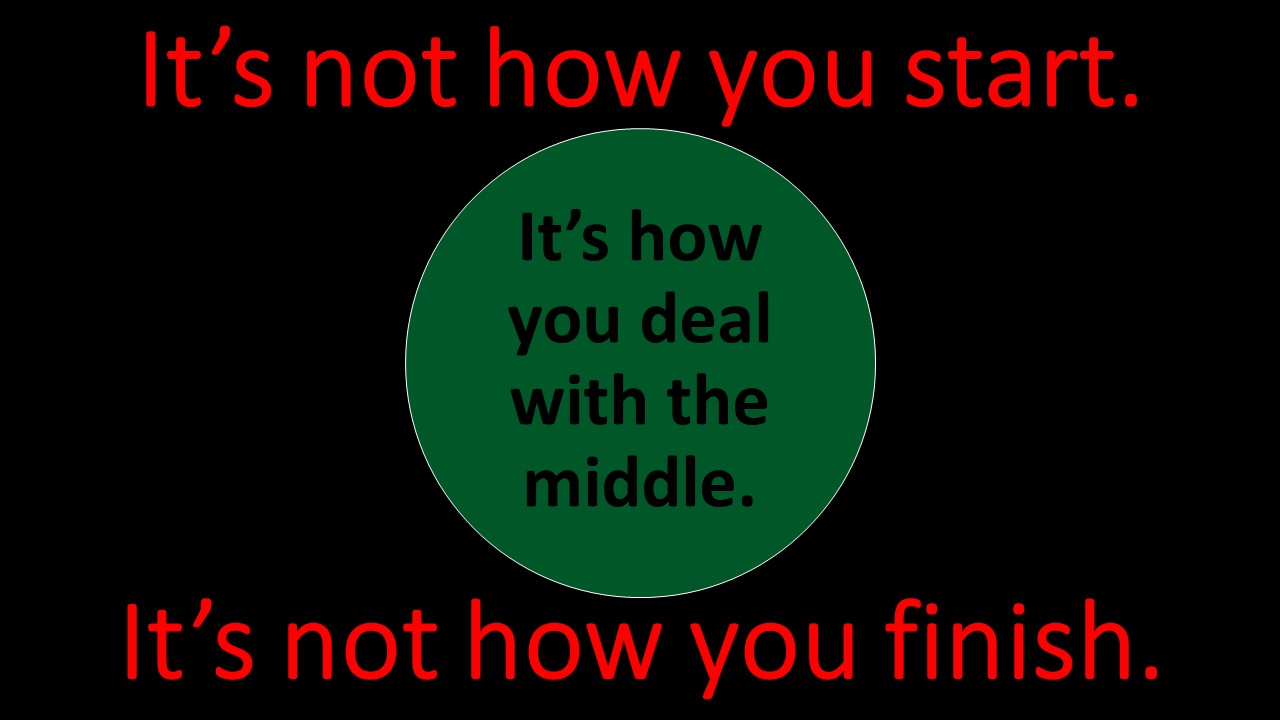 It’s time we revisited that hackneyed piece of common wisdom which states, “It’s not how you start, it’s how you finish.” When you are doing anything substantial, like running a marathon or a complex project – starting is easy, finishing is also surprising easy but dealing with the middle is what separates the medal winners from the also-rans.

Anyone can start a marathon. Life is easy when you’re full of energy, hype and nervous tension. And anyone can finish a marathon once the end is in sight. It is the doldrums – that dire, dour, dark period that every runner experiences somewhere after the halfway mark that causes the majority of casualties. The doldrums is where self-doubt creeps in, fatigue festers, the brain does its best to override the body and the allure of quitting is at its zenith.

I’ve started 241 marathons and ultras in varying states of fitness and health. At the start line of every one, I’ve known that I can make it to halfway. I’ve also known that I can complete the last ten kilometres. It is the doldrums that I prepare my mind for. In life as in marathon running, neglecting the psychological warfare that grips you during the doldrums is what finishes you.

Comrades doesn’t just have the doldrums – it has the Dol-Drummonds at the halfway mark. I can remember my first Comrades in 2003: I was full of vim, vigour and youthful naivety. I was coasting my way along and had already added “Comrades finisher” to my CV. I flew through the halfway mark full of the euphoria one associates with a Comrades debutant. I wasn’t ready for the sucker punch lurking around the corner. Up until that point I had only stopped to retie my shoelaces but a series of hills with no name knocked the wind from my midriff.

A more recent memory was last year when I did my Home IronMann just after lockdown. It was all fun and games until 15km into the marathon leg (a 3.8km swim and 181km cycle are about the equivalent of a six kilometre run so this was technically halfway into the triathlon). I had a severe sense of humour failure from that point but amazingly found a renewed burst of energy as the remaining distance dropped to single figures.

Looking back at the stats of the last Comrades Marathon in 2019, I realised that I was not alone with my mid-race crisis – 19,000 fellow Comrades can help illustrate my point. The graph below shows how many Comrades bail at each timing mat over the 90km journey between Durban and Pietermaritzburg.

There is a slight anomaly at the first timing mat in Pinetown where the number of runners actually increases by 34 (perhaps we need former rugby test referee and Green Number 22512 Jonathan Kaplan on hand to officiate runners entering from the side!). However, the drop out numbers are very static all the way to the halfway mark at Drummond. Only 91 Comrades fall before halfway and there are a further 337 causalities at Drummond itself.

The Dol-Drummonds, that short, triskaidekaphobic 13 kilometre stretch from halfway to Cato Ridge, accounts for the highest number of race day casualties (668). The total drop-off in numbers over the 23 kilometres between Cato Ridge and the penultimate timing mat at Polly Shortts is a whopping 1,687 runners. That means that over 70% of Comrades starters who failed to add to their medal count in 2019 fell over this 23 kilometre battleground.

With the end in sight, the body count falls to its lowest level since the first third of the race. There are just 284 runners who summit Polly Shortts but don’t get to experience galloping around the Scottsville race track.

We all need to be wary of the middle – starts and finishes take care of themselves. On that note, I am starting to get concerned about my middle, which seems to be expanding rather rapidly due to an absence of marathon running. Let’s hope that we’re almost at the top of Polly Shortts in the Covid pandemic, that the malevolent middle is almost behind us and we can look forward to seeing the single digit kilometre boards counting down to normal running activities again.

Other articles in the ‘Life Lessons From The Road‘ series

It’s a Jog, not a Sprint

Use Goals to Drive your Journey

One Reply to “Life Lessons from the Road: Be Mindful of the Middle”