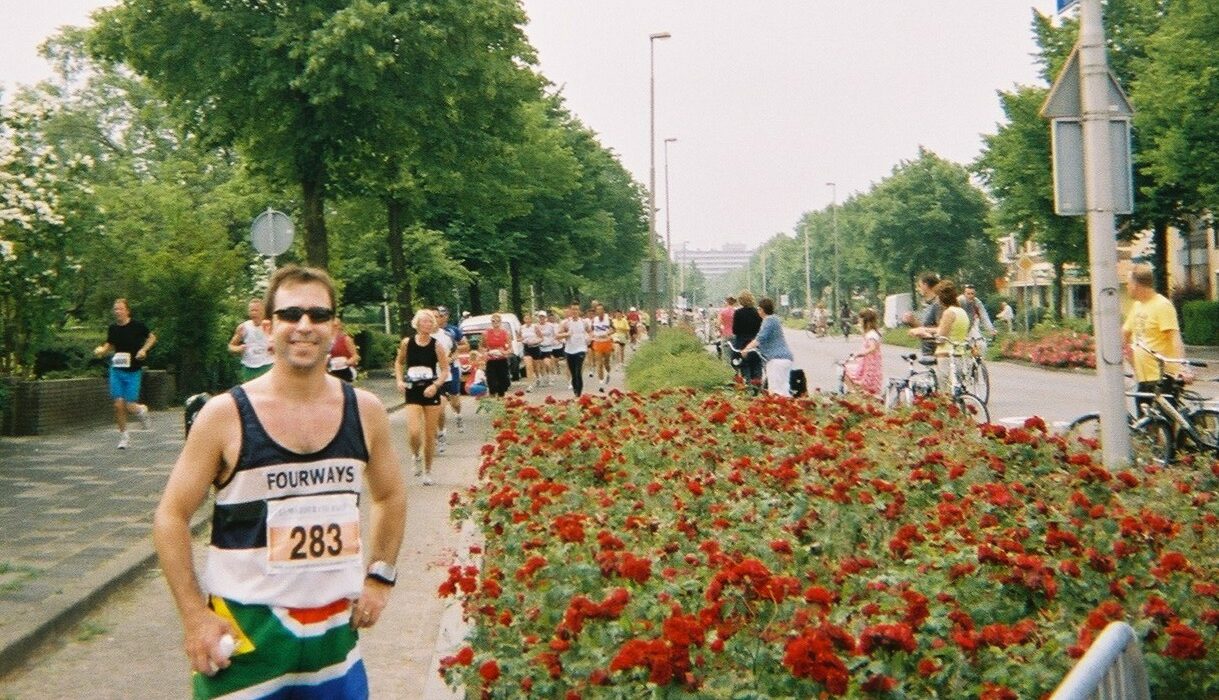 A year after the Dutch summer sun beat me up, I was back in Amsterdam to speak at a conference. To satisfy my insatiable hunger for marathons, I was faced with a repeat visit to Leiden or a 150km drive to the extreme north of the Netherlands. Fool me once, shame on you, fool me twice, shame on me… so the saying goes. I wasn’t going to chance another midday massacre in the middle of summer and therefore decided to head north to Leeuwarden, with just over 100,000 residents the largest city in the province of Friesland.

It is often very entertaining to read the English section of foreign marathon websites, which tend to be full of unintentionally funny translations. The Leeuwarden Marathon avoided this problem by having no English section. Google translate had not yet been invented, so this tested the limits of my rudimentary Afrikaans taal skills, as I had to translate what appeared to be Dutch text.

I managed to figure out the important details – like the race date and start time – and also that this was a pre-entry only race, and I had missed the deadline. I wrote a passionate, imploring letter to the organisers in my best Afrikaans to plead for a late entry, and a reply came back a short while later in English to say they would accommodate my petition.

With my entry secured, the next challenge was safely navigating myself halfway across Holland in a manual rental car, driving on the wrong (that’s the right) side of the road. It is amazing how versatile third gear can be, and I arrived without incident for the 10:30am start. They had over 3,000 runners taking part in the various events – there were also half marathon, 10km, 5km and 3km races – but less than 300 of these were for the full marathon. (I found out later that this was the first year they had added the marathon distance to their running festival, and it was dropped after 2010 due to lack of demand.)

It was another double-lapper, so this meant that the second half was quite lonely, although there was quite good support along portions of the route. I really don’t know what it is about the Dutch and double-lappers – it seems that it is impossible to run a single-lap marathon anywhere in Holland. (Or Pretoria.) And of course, the course was flat… in fact, it was so flat that the only deviation in altitude was the occasional dyke crossing.

Despite my previous experience of getting fried in Leiden the year before, I couldn’t help but snigger at the large amount of website space the marathon gave to “What to do if the temperature gets over 20o C.” (At least, this is what I translated from, “Er wordt zondag een temperatuur van boven de 20 graden Celsius verwacht, welke maatregelen zijn genomen?” to mean).

However, the joke was on me, as I struggled through the last 10km with the temperature pushing the high 20s and with more humidity than you would find in a rickshaw-puller’s jock strap. I did manage to cool down about four kilometres from the end, when I took a refreshing dip in a dyke before grinding out the last few kilometres.

Relaxing with a beer back in my Amsterdam hotel lounge after the marathon, I asked the receptionist what Leeuwarden is “famous for.” Her immediate reply was a curt, “What do you want to go there for?” The Dutch are normally very courteous, so I explained that I had already been there earlier that day to run marathon. After making some derisive remarks about the “north” of Holland (although she has never been there), she concluded her tirade with, “they speak another language up there.” I asked what language they spoke “up there,” as it all sounded pretty Dutch to me, and the reply was Dutch, but with a different accent, so she said she “can’t understand them.”

This intrigued me, so I did some follow up investigations with other members of the hotel staff. It turned out that the people of Friesland do indeed speak a different language, rather imaginatively called Fries. However, no one, including a couple of hotel staff members who hailed from the “north,” could explain how this was different from traditional Dutch (and both “northern” staff members were very forthright in stating that they did not come from Leeuwarden itself). The best definition I got was that Fries is a “combination of Dutch, English and German.” On reflection, this was probably why my pseudo-Afrikaans email was understood.

I found Leeuwarden pleasant and picturesque, and the people friendly. However, when I asked the Amsterdam establishment, “What is Leeuwarden famous for?” all I got back were coy smiles and euphemistic remarks. It was surprising that a city just over an hour’s drive from Amsterdam could have evolved a completely different culture and language that the rest of the country seemed to be ashamed of. After all, Leeuwarden is only as far away from Amsterdam as Springs is from Johannesburg…

This article originally appeared in the March 2021 edition of Modern Athlete and is the second instalment in my Dutch marathon trilogy.

One Reply to “Leeuwarden Marathon (Dutch with a difference)”