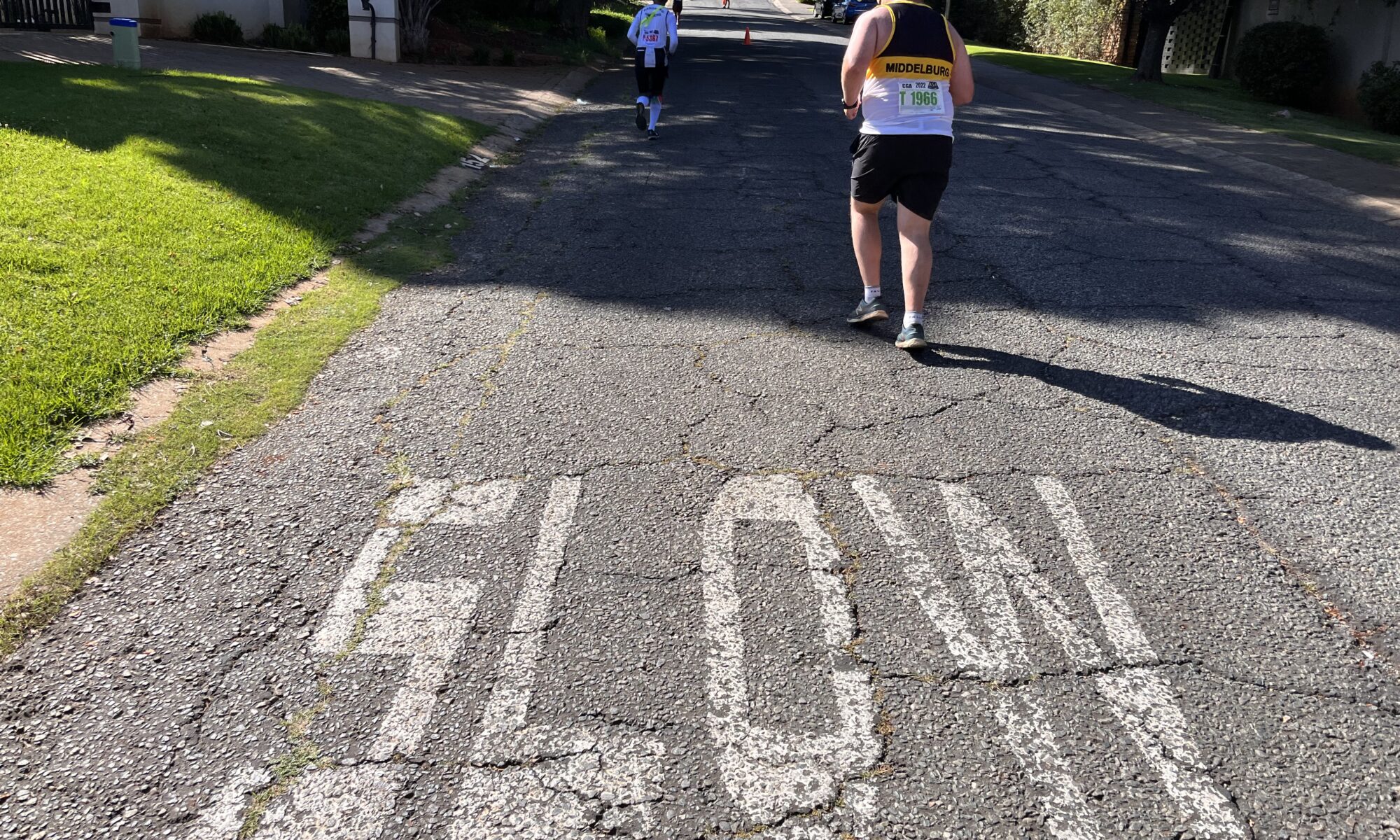 With two daughters and one wife, I am totally emasculated at home. Even our cats are female. In fact, the only remaining semblance of masculinity I have left is my surname. I am so thoroughly domesticated that I even put the toilet seat back down when I travel for a marathon by myself.

One of the few vestiges of male privilege that I do have left is being the only member of the household who can walk around topless in decent company. Sadly, even that is becoming difficult. The sight of my stomach unleashes a verbal barrage of sledges that would put Australians with sandpaper in their pockets to shame.

Let’s just say that middle age spread has hit me hard. Two marathons towards the end of last year did nothing to halt the slide and the excess baggage continued to pile onto my midriff. Covid kilograms are difficult to shed. At home I have been favourably compared to dadbod Thor in Endgame (but without the good hair), been offered a stomach bra for my birthday (along with a tanktop – apparently because my stomach is the size of a tank) and have even had songs written about my waistline (the main lyrics are ‘belly’, ‘jelly’ and ‘wobble’ used in every possible combination).

With things going south, running a marathon that promised to help “Find your true north” seemed appropriate. I’d entered the inaugural Joburg North City Marathon in 2020 (which ended up becoming the first Covid-cancelled casualty) and I wasn’t going to miss the event in 2022.

Race morning parking was super easy and efficient at the Marks Park start. I was looking forward to seeing some familiar faces and immediately bumped into my mate Julian as I stepped out of the car, followed by the friendly face of Fourways clubmate Janine a short while later. After a quick catch-up, I headed towards the impressive laager of cubicles to ensure that I started the race as light as possible.

The race is timed mat-to-mat and, to cater for Covid-regulations, the full and half marathoners were allowed start any time between 6:00 and 6:15am. However, as the throng of about 2,000 eager runners rapidly swelled it was clear that few people could wait an extra 15 minutes to get Gauteng marathon running going again.

The race is the brainchild of Graham Block and is run under the auspices of the Run Zone Athletics Club (which he also founded and has quickly become one of the largest clubs in the country). Graham put a great deal of time and attention into plotting the perfect marathon route.

You can’t avoid hills in the north of Johannesburg but with careful planning and empathic consideration long, steep hills can be avoided – and Graham has deftly evaded all the long, steep climbs by squashing every short hill in the greater Randburg area into his marathon route.

However, Graham does provide instant gratification, and has been quite deliberate in ensuring that every hard pull is rewarded directly afterwards with a recovery downhill. On top of this, he has managed to pack in more shade than a solar eclipse over the course – which is a lifesaver for a February marathon on the Highveld.

I much prefer single-lap routes but they are something of a rarity in Gauteng, so it’s great to have a ‘one-and-done’ option close to home. I also enjoyed running past most of the scenic highlights in this part of South Africa’s largest city (yes, Cape Townians there might not be any mountains or beaches but there are plenty of attractive parts in Johannesburg).

Speaking of Cape Town, I understand that Gauteng runners who support (openly or secretly) Western Province rugby flock to join Boksburg Athletics Club because of their blue and white hooped vest. Just after the half / full marathon split I found myself sandwiched between a pack of Boksburg runners. This would make most runners feel very uncomfortable (unless you’re running through a particularly dodgy part of town in which case it is highly recommended to find a bunch of Boksburg runners for protection). However, I was completely relaxed, explaining to Huntley Harris (the only male member of the Boksburg gang) that my Cape Town upbringing gave me a nostalgic, affinity amongst the Boksburg ‘Streeptruie’.*

* Huntley’s response to my observation made it clear that he is still in the closet when it comes to which rugby team he supports.

We were running at a similar pace and it was good to burn down several kilometres with some pleasant chatter. Every time I caught up to Huntley (or he caught up to me) the conversation would resume, and every time this happened the Boksburg ladies would drop back. For them, I imagine it was like having your kid making friends with another kid in the Spur playpen so that you can happily savour a few minutes of tranquillity and adult conversation whilst they entertain each other.

One of the Boksburg ladies was Huntley’s faster wife Caronn. At one point she apologised for “my husband’s sense of humour”, but I said it was all appreciation on my side. A travesty of the modern age is how few people appreciate a steady barrage of dad jokes.

Much later in the race, whilst on a slow, solo meander up one of the many hills, I did come up with what I thought was a rather fine dad joke but sadly there was no one receptive within earshot to share it with. However, I did unleash it on my family once back home where it received the highest possible praise that a dad joke can receive in our household when my eldest daughter evaluated it as, “Dad, that’s actually not that bad.” So I thought I’d share it here before we get to Northcliff.

Question: The Teenage Mutant Ninja Turtles are found dead in their home. How did they die?

On the subject of things that can kill you, Northcliff is a suburb that strikes terror into the legs of the Highveld distance runner. The Pirates 21k is run up and down Northcliff and is known for being the toughest in town. All the running clubs in the area have at least one ‘Northcliff’ route for hill training (regardless of the running club, if the route goes through Northcliff it is known as “The Northcliff route.”) However, to my knowledge, no marathon has ever had the audacity to traverse the Northcliff rock face.

The race website has the most detailed and expressive route description I have ever seen. My pre-race preparation included a detailed study thereof and I was impressed at how well the Jane Austen-esque language brought the familiar stretches of road to life. However, I was dubious when the prose switched genres into science fiction reading “…crossing over Beyers Naudé Drive onto the flat side of Northcliff.”

I have run through Northcliff many times and I can categorically state that there is no flat side of Northcliff. The route description further deviates into the alternate reality multiverse stating, “The next 5km through Northcliff is where you’ll find your Energy, Strength and Power recharged. It’s a fast, excellent recovery, with fun and fast racing sections all the way to the 30km mark.”

I think that Graham Block must have had his nose too close to his motorbike’s exhaust pipe when he wrote this. I can see “fun and fast racing” occurring on the back of his high-powered K1200 BMW on the streets of Northcliff but it’s never going to happen on these two legs.

Let’s just say that Northcliff made it easy to stick to my ‘second half of the marathon’ plan which was to ‘walk the uphills and run everything else’ and it took a long time to get to the 30k mark. The good news is that there are some easy post-Northcliff kilometres to get you into the mid-30s but, with the temperature heading upwards, the Covid-kilograms were starting to weigh me down. 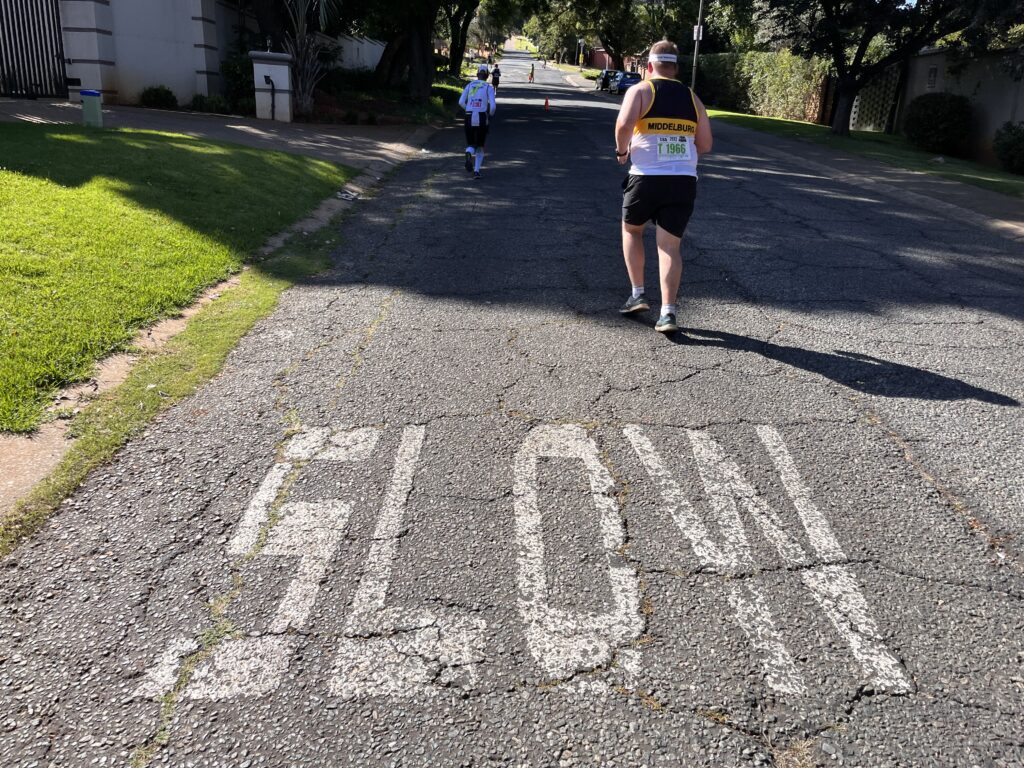 Whilst the route description on the web site is an elegant textual tapestry, the ‘race story’ section reads like it’s had a triple-bypass through Google translate. It includes references to pyramids, ley lines, vortices, Stonehenge and even the Hitchhikers Guide to the Galaxy under the heading, “The Most Epic Running Story Ever Told.” To be honest I am not sure what to make of it, so take a look yourself (or watch the companion video complete with an ethereal planetarium narrator-like voiceover).*

* I did ask Graham to clarify the ‘story’ and the summarised version is, “It’s about finding your true north – and accomplishing what you want to accomplish through your running journey.”

With about 5k to go and the temperature pushing 30°C, I was having a full on melt down when out of nowhere a downhill appeared as my sedentary Australian brother called me on Skype. We hadn’t chatted in a couple of weeks and I found renewed energy as I asserted my sporting dominance over him with some good conversation on the trot and a couple of kilometres flew by (for the record, the marathon score is Stuart 244 : Alistair 2).

On the home stretch, I once again applauded Graham Block and the Run Zone team for all the delicious shade they crammed into the route. Even with the midday sun beating down there was plenty of foliage to take cover under as I slowly completed the last few kilometres back to Marks Park.

With all the controversy about Comrades doubling their entry fees, I thought I’d leave the financial report for the end of this article: Although the route is Randburg, the entry fee is Sandton.

At close on R440* this is currently the most expensive standard marathon on the South African running calendar. However, the combination of one-lap, shade the whole way, pleasant scenery, excellent support tables (with food and toilets) and minimal traffic on the course makes this, for my money, the best marathon route in Gauteng. Run Zone Athletics Club have quickly become an institution on the Joburg streets and their marathon is sure to do the same.

* See this short companion article for an explanation of race costs: “Why are race fees so high?”.

Graham’s new kid on the marathon running Block is a tough test for the undertrained and overweight but those in better shape than me will no doubt find this a good course to race – and I saw plenty of PB boasts on social media. And even for the lazy marathon runner, the stats don’t lie – despite lugging my excess baggage up and down every minor hill in Randburg, this was my fastest marathon in over two years.