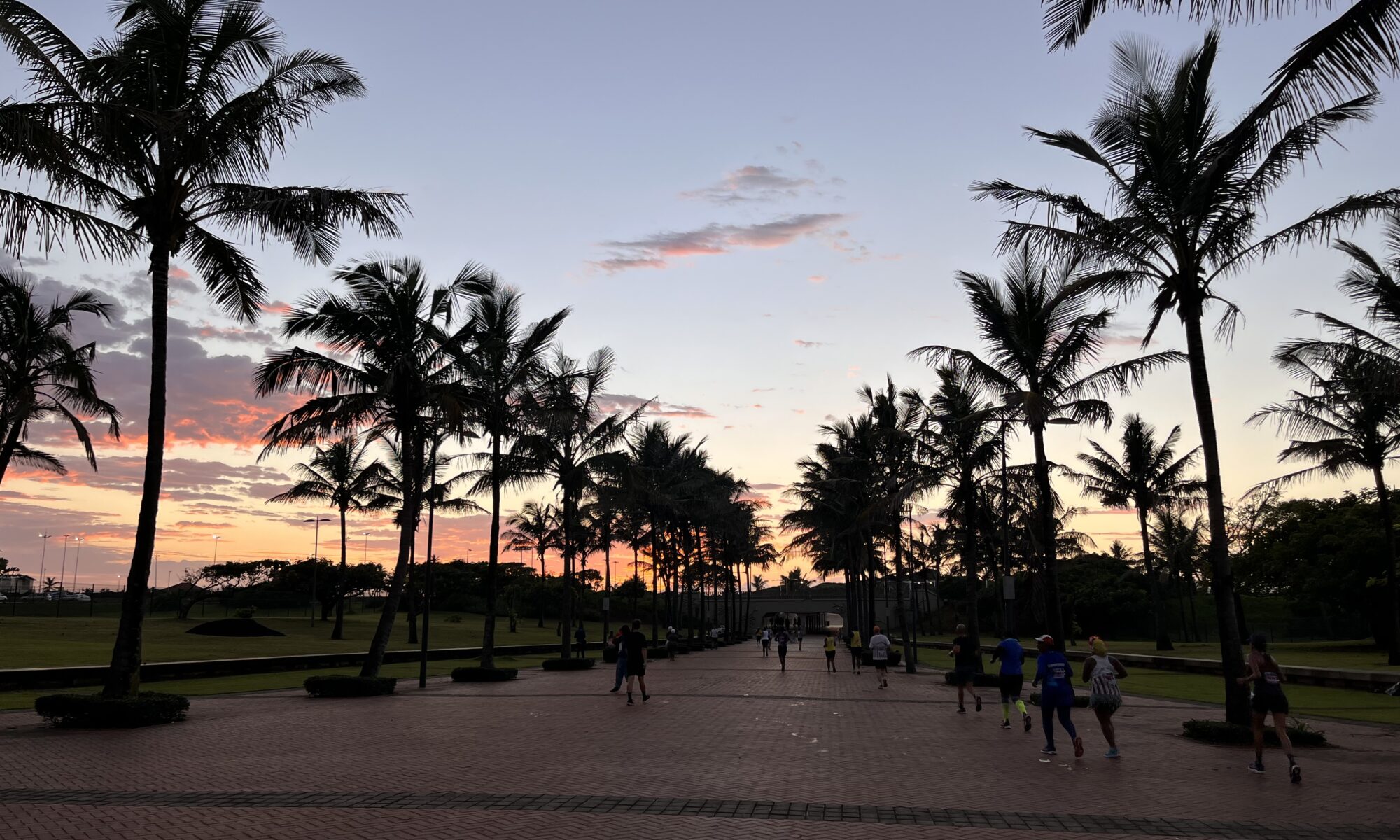 With bad traffic and a lack of local knowledge, I started the Best of the Best Marathon ten minutes late and two poos short of an empty stomach. It wasn’t for lack of trying either. I had allowed more than enough time to get through to King’s Park from our holiday accommodation in Salt Rock (this particular marathon was sold on the pretext using my daughters’ mid-term break as a long weekend at the beach and a chance for my wife to visit her mom and gran in Pinetown).

I had been assured that there was ample parking and, having joined the queue of cars with about 50 minutes to spare, I thought I was safe. Rookie error number one was following a convoy that split to the right towards a large parking garage – only to be informed that this was for Virgin Active members only. The security guard was in no mood for the “I forgot my card at home” excuse so, after 15-minutes of backtracking, I rejoined the slow-moving queue which was now pretty much at a standstill.

Long story short, parking was full and everyone had to turn around and make an alternate plan. While all this was going on, I did manage to eat my sandwich, apply a liberal amount of sunblock and lather Vaseline on all my tender areas (I seem to have a lot more tender areas these days) whilst only stalling my manual rental car twice. I found the least dodgy, best lit alcove that I could squeeze my dinky Hyundai into and trotted off to the start hoping that the car would still be there when I got back later that morning (since I did not fancy having to buy Hertz a new car).

By the time I got to the start at 5:10am it was dark and devoid of runners. I managed to find where the starting timing mats were and, after joking with the timekeepers that I was about to start my second lap, headed off into the empty streets.

With this being my third marathon in three weeks on a weak base and a heavy stomach, I knew I was in for a long morning. In my favour I had thick, sea-level oxygen for my highveld lungs and a flat route for my lazy legs but standing between me and a day at the beach was the Durban heat and humidity.

All the major sports stadiums in Durban are located within one big kick of another. You start outside the King’s Park rugby ground, loop around Kingsmead cricket stadium and then head past Moses Mabhida football arena – and that’s the first 5 kilometres done.

As the finish of the Comrades Marathon “down” run, Moses Mabhida Stadium will be a sight (or should that be site) that many runners will be hoping to see before the sun goes down on 28 August. I am still deciding whether to enter Comrades this year (or rather whether I can get my head around doing peak mileage over the Joburg winter) but my legs did feel like they’d already run 90 kilometres by the time I passed Moses Mabhida again on the second lap!

During the previous week’s Peninsula Marathon, I had to wait 29 kilometres to see the Atlantic but it took just 6 kilometres be greeted by the Indian Ocean and a spectacular sunrise at Best of the Best. Unless you’ve got really good eyesight and get visual of Cape Agulhas from the top of Chapman’s Peak, you don’t actually see two oceans at the Two Oceans Marathon – so I no longer have to wait until Easter to worry about that technicality.

I eagerly awaited reaching and running along the promenade, primarily because seaside promenades are blessed with plenty of public toilets. Having found a suitbable facility, my pressing engagement was delayed as I observed the strange site of a fellow runner ornately laying down several layers of toilet paper* on the seat. I was not sure whether this elaborate routine was some sort of Covid prevention measure or the standard funeral rites he issues every morning before burying last night’s supper (and I didn’t stop to ask).

* Despite the temptation I decided that taking photographs in a public toilet was inappropriate. I did however find this road sign shortly afterwards as a suitable substitute to subtly convey the same message.

After a pleasant two kilometre stretch along the seaside, you turn left towards the Blue Lagoon and then do a short loop before heading into the leafy suburbs of Durban North. There’s plenty of shade along this section as well as the odd little hill thrown in for good measure (but nothing that should trouble anyone in a better state of fitness than I’m in).

A distinctive highlight of this section are the radiant fever trees – like the one in the photo below (which was on one of the short hills so taking a photo allowed me a short break from the climb). Whilst I was enjoying some Sunday morning fever trees, I reflected that the word “fever” can be used in both a positive and negative context. For example someone who is totally unprepared to run this marathon would get “Saturday Night Fever” pinning on their race numbers in trepidation, whilst someone like Nkosikhona Mhlakwna (who won the men’s race in 2:16:37) would have had “Saturday Night Fever” pinning on his race numbers in eager anticipation.

You head north until about 13.5 kilometres in the lap when you reach Virginia Airport, after which you head back south with a bit of winding through the suburbs, over the Umgeni River and then back into the sports precinct to complete the lap.

Support tables were frequent and well stocked (which was appreciated by this runner who needed to douse himself with water over the second lap as the temperature rose). Most of the tables are coordinated by local running clubs but I thought that Nando’s are missing out on a great marketing opportunity: Since the race is organised by the Ama Ravens Running Club, there’s the obvious ‘raven to chicken’ comparison and “Best of the Breast” has limitless promotional possibilities.

Ama Ravens are a club who are both fast on their feet and fast learners: The club was only founded in 2019 and the inaugural Best of the Best Marathon was held in 2020 (just before the Covid-curfews kicked in). The club has quickly grown to over 300 registered members and their mission is to, “Identify talent with specifically developed programs, develop and nurture that talent to compete at a professional level with the intention to produce elite athletes that can go on to perform at the Olympic level.” As such, they provide complete support (including schooling, housing, and food) for ten elite athletes from low-income families where widows or single mothers are the sole breadwinners.

For a new event and new club, I was impressed with the flawless race execution – especially when contrasted with the diabolical Durban City Marathon organisation that was held a few week’s later (Durban City is an established marathon that is ‘organised’ by senior KZNA technical officials). The Durban City Marathon did however further highlight the success of Ama Ravens with one of their elites, Mkhwanazi Bongelani, winning the men’s marathon in a competitive field.

On the first lap we passed a Shell petrol station and I noticed that the attendants were busily erecting some trestle tables. Shell has (rightly) had some bad press recently but they are not all bad. Having noticed the steady stream of runners going past, the Shell staff quickly erected an impromptu water table (and this runner appreciated their efforts with an extra water stop on the second lap).

Having confirmed that the sun still rises in the east earlier that morning, I was happy to finish before confirming that the sun still sets in the west – and I was even happier to find that I did not need to buy Hertz a new car. Although this is a fairly new event on the calendar, Ama Ravens had no problem filling their Covid-quota of 2,000 entries (split evenly over the half and the full). This marathon is an excellent option for those looking for a well organised, easy qualifying route at the coast. On the basis of this year’s event, I’m sure that the Best of the Best Marathon will go from strength to strength.

3 Replies to “Best of the Best Marathon (Surviving Shark country)”